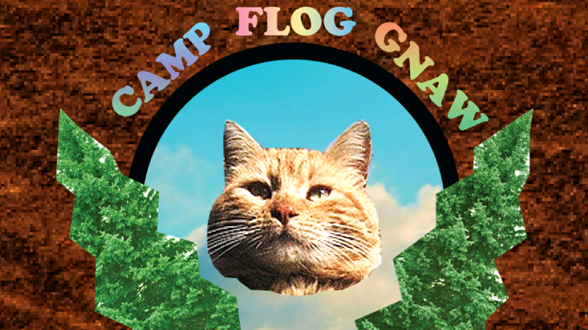 Welcome to Camp Flog Gnaw, where your bass addiction meets a hip hop high unlike any other. Just call us your camp counselors if you are down for a hoodie-good-time!

WTF is Camp Flog Gnaw?:
Camp Flog Gnaw is the brainchild of alternative rapper TYLER, THE CREATOR; a hip hop-driven festival held in Los Angeles. Camp Flog Gnaw is credited for hosting the biggest tastemakers in contemporary hip hop, rap, r&b, and beyond. This particular installment of the carnival is special for quite a few reasons. Not only is this the 4th annual Camp Flog Gnaw festival, it’s proving to be the biggest yet. You will see how increasingly open minded Camp Flog Gnaw continues to become as the collective expand its horizons even further. The addition of electronic music mainstays FLOSSTRADAMUS, TOKIMONSTA and MR. CARMACK, among others, completes the revolutionary flow of creativity circuiting through the Camp Flog Gnaw vibes.

Uh, why?:
The alchemy of hip hop and electronic dance music is my all-time favorite movement in much to have spawned from the great EDM boom of the 2000’s. Between the prevalent influence of dance music production theories in hip hop tracks, and vice versa, and diverse artists like Diplo and DJ Mustard- whom dabbled in both genres for most of their careers, long before Flo Rida and his ridiculousness, the evolution of genres like trap and G house wouldn’t exist- at least not yet. But the music has evolved so quickly, as we have in society. The two biggest mainstream genres in the world, not to mention the most influential in terms of cultures and lifestyles in media, joining forces; bridging gaps in everything from music to race, and societies to generations. If all that deep stuff doesn’t appeal to you, I’ll have you know Odd Future- the rap collective whose members consist of hip hop tastemakers like Tyler, the Creator, FRANK OCEAN, CASEY VEGGIES and more- will be performing together for the first time since their alleged disbandment months ago. All I guarantee is: the amount of stellar to be had in this titan-like joining of forces, when electronic emotion meets hip hop soul, the world goes crazy; eats it up; comes together; dances. The Camp Flog Gnaw crew understands how powerful this movements is. They see how it will change our entire generation, and they awaken the crowd their generously futuristic aesthetic. I highly recommend you put Camp Flog Gnaw at the top of your fall festival list. It’s going to be a regally ratchet- yet incredibly groundbreaking- good time for our ever evolving community.

FOR TICKETS AND INFORMATION ON CAMP FLOG GNAW, CHECK OUT: Website