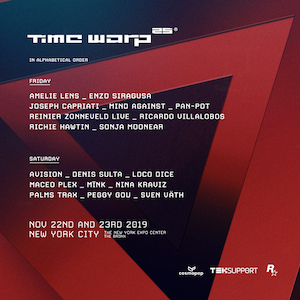 After months of waiting Time Warp NYC is approaching fast. Next weekend, on November 22 & 23, one of the world's leading forces in House & Techno returns for the first time in 5 years to take over The New York Expo Center for 18 combined hours of some of the best the world of techno has to offer. In preparation, here are some of our favorite artists that you absolutely MUST see.

After the last year, you'd be hard pressed to find someone that doesn't know about Amelie Lens. Between being featured on the cover of Mixmag
last year, playing the Atomium for Cercle, or her jaw-dropping appearance this past Memorial Day in NYC for Teksupport, it's clear that her momentum won't be stopping any time soon. Her most recent 4 track Little Robot EP that came out this past September packs 4 distinct tracks that will be sure to fire any listener up before the event.

Maceo Plex's profound ability to weave beautiful melodies into his deep and soulful tracks makes him one of our top artists to catch on Day 2. His past NYC appearances have been nothing short of jaw dropping, with the most recent appearance stretching way past the event's official end time all the way until sunrise. Make sure to buckle in and let the maestro of techno take your on a journey. Make sure to listen to his most recent album, Mutant Series below.

Richie Hawtin is easily one of the foremost authorities on all things techno these days. He most recently released his CLOSE COMBINED live album, in which he took his Glasgow, London, and Tokyo Close Live shows and combined parts of each for a unique listening experience. In addition fans can will soon be able to download his "CLOSER" app where they'll be able to download previous Close Live sets and manipulate the camera views as desired to get an even more in depth look into Richie's genius.

Denis Sulta's meteoric rise over the last few years has been one to follow. With appearances at Circoloco,
DC-10, XOYO, and other big names, Sulta is a force to reckon with. His most recently released his new EP "Aye Spoake Te Sumwuhn & They
Listenhd" takes a very experimental turn, displaying his mind boggling versatility. Those who miss his appearance on Night 2 will be heavily missing out.