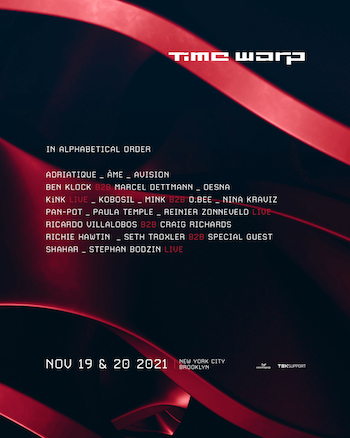 Continuing its legacy as what the New York Times referred to as a “pilgrimage event on the global techno calendar,” Time Warp, in partnership with long-term NYC collaborators Teksupport, announced the bill for its return to New York this Fall, following a two year hiatus. its new Brooklyn location will play host to two days of audiovisual technical immersion soundtracked by some of house and techno’s top talent.

Since its 2014 debut in New York, Time Warp has made the city a second home with Teksupport as its chosen partner. Its 2019 return saw fans gathered from across the nation to celebrate 25 years of Time Warp, which also marked the first large-scale underground dance music event to happen in the Bronx. Following a forced two year break, fans can expect peak energy for its 2021 return.

Time Warp’s return to New York will follow its prodigal return to Mannheim October 30 2021 before heading south to its Brazil HQ of São Paulo. Head to their website for more information on their international events and to sign up for tickets.