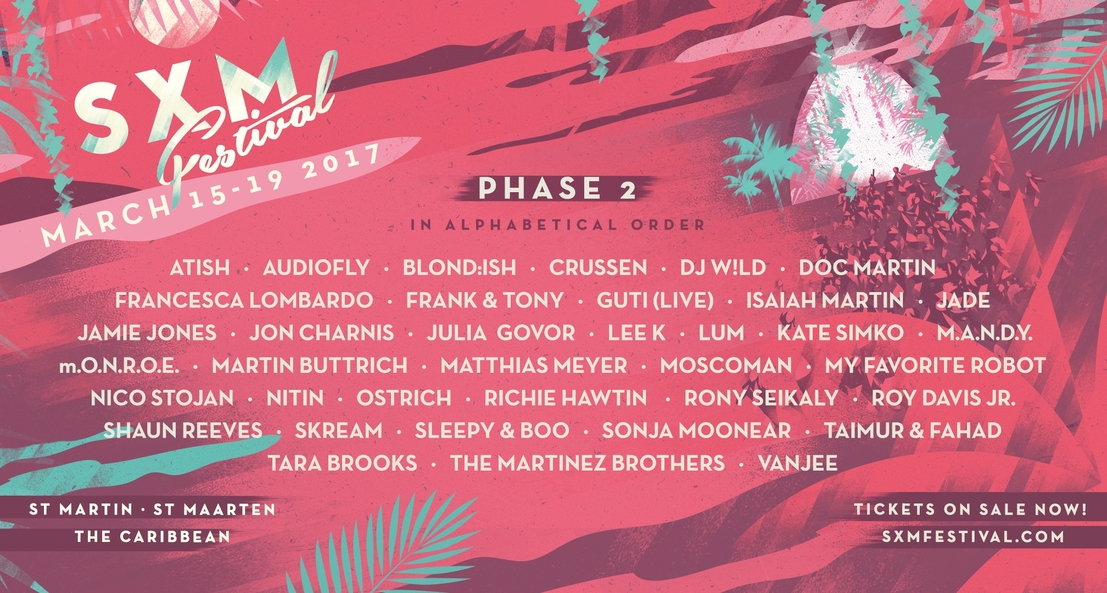 The hottest event in March has just announced it's phase 2 lineup today as SXM Festival (March 15-19th 2017) didn't disappoint with an even more impressive round of artists headlined by RICHIE HAWTIN, JAMIE JONES, DOC MARTIN, Martinez Brothers, and FRANCESCA LOMBARDO. The lineup was already jammed packed with talents such as RICARDO VILLALOBOS, BLACK COFFEE, Âme, BOB MOSES and NINA KRAVIZ – these newest additions show SXM Festival going even deeper into the underground and has earned its industry-leading reputation.

“At SXM Festival we value quality and intimacy. Quality of music and experience. Intimacy with some of the most wonderful, enlightened, party people on the planet. Add to that the breathtaking beauty of Saint Martin and it’s a powerful mix. We have already sold tickets in the US, Europe, Australia, Africa and Asia. And we can’t wait to welcome our global family to this magical island. In year two we have also redoubled our efforts to bring the very best talent in underground electronic music to SXM, with every carefully curated artist having their own sonic identity. Improving on last year’s line-up has been a challenge because we respect the musical story so much. But as we announce Phase 2, we feel like we’ve done it for 2017 – and this story should win a Pulitzer prize.”

For Tickets and More Info on SXM Festival Visit: