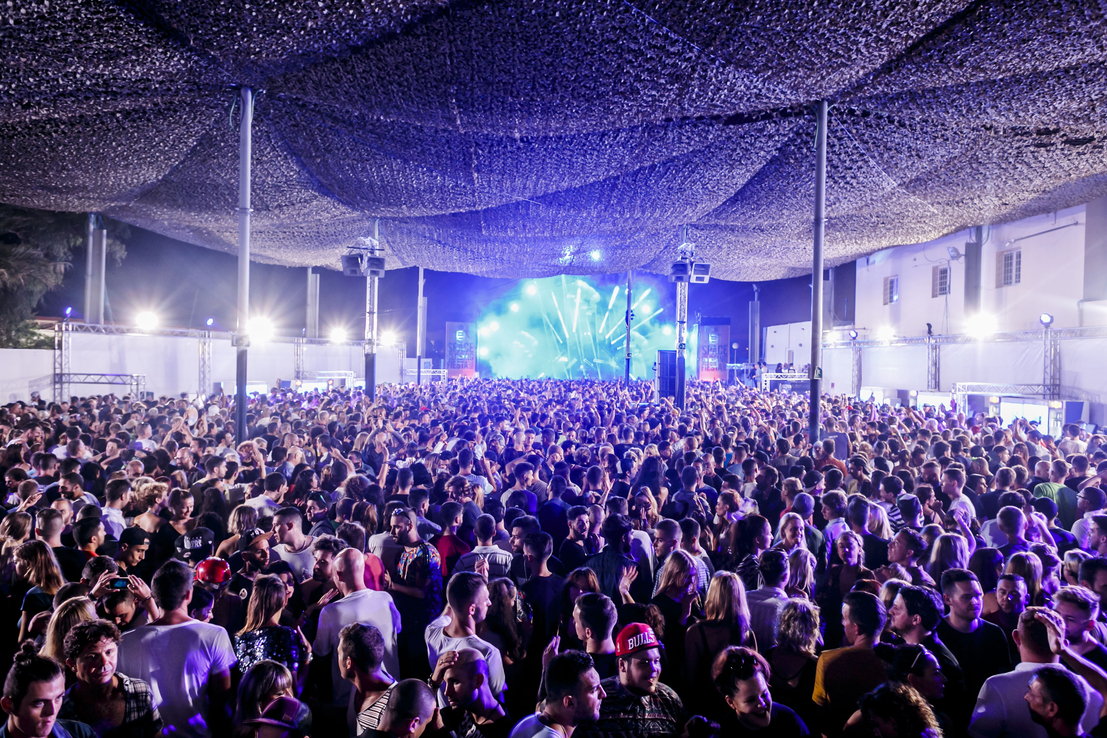 Space’s Closing Fiesta exceeds all other parties with its multiple rooms and close to twenty hours of uninterrupted partying. A terrific closing night as it’s supposed to be, it takes revelers on a trip beyond outer space, an unforgettable night that will inevitably go down in the history of many partygoers. Once again, the Space Closing Fiesta outdid itself, delivering more than necessary for a party outside of this world. Providing a taste of Space’s best of the season, Space puts up almost all of its parties on display once again, distributing them around the expanded space in the many rooms on top of the parking lot turned dance floor to accommodate the thousands of partiers saying goodbye to the summer and island’s party-season but not without one final unmatched blowout. By mid-afternoon, the party had already taken off outside with MYKRIS & Camilo Franco leading the carousing on the Open Air Stage by Ultra Ibiza. The mega-fiesta was off to an explosive start when ERICK MORILLO took to the console. With the crowd already on fire, planes flew overhead, reviving the old feel of open-air parties as revelers got their moves on. Dancing outside during the day in itself has a touch of magic to it; add Erick Morillo on the rocking stage set up by Ultra for one fine fiesta, as he can bring it unlike any other. Erick, whose rocky lifestyle keeps him on that thin line, knows exactly how to get a party going. Multiple award winner and renown for his own party abilities, which he deems necessary to delivering the vibe, his love for letting loose shines through when he gets in that zone, his decades of experience proving a solid foundation to his sound and groove. After his 2013 learning experiences, he appears to be back with a bang. Pulling out some sick tunes, Erick flew high this evening, taking everyone along for the ride with him. His two-hour set did not let up for one minute, top notch from beginning to end. With his very housy and loving remix of John Lennon’s “Imagine,” the vibe set off jovial and upbeat from the start. Around 8:00 p.m. several of the inside rooms welcomed the by now overflowing crowd. The Closing Fiesta nicely sums up the Space portfolio and feel, offering a taste of its multiple parties via the exceptional venue. For a little taster of everything, the Sunset Terrace bedecked back as Elrow with GEORGE PRIVATTI, while the Main Room by DJ started with Blackhall and Bookless, and the Premiere Etage, gently stroked by a light cool early fall sea breeze coming in from the beach across the street, put on DAVID GLASS. Teeming with excitement, the open-air stage proved difficult to leave despite its being full to capacity. After his impressive finale, Erick saluted the crowd and welcomed LUCIANO for another kicking set. Bringing his Latin flair touch, contagious rhythm, and dancey beats, Luciano dove right in, just as the Covered Terrace also joined the fiesta with Kehacuma resident JAVI BORA after 9:30 p.m. Javi kept at it strong for close to three hours, putting on Kehacuma one final time this season.

With people letting loose unrestrained, the most original dancing emerged while the mega-club was still filling up. As huge as a venue can be without losing its club feel, this closing party rules among the island’s already impressive repertoire, recreating a festival within a club. With 90s classic "Capricorn" emerging from the Sunset Terrace, Elrow grabbed a hold of a great part of the crowd. Possibly sometimes looked over for its youthful suggestion, Elrow proved quirky and entertaining on multiple levels. Its sound reminiscent of 90s but in a contemporary manner, BAUM b2b Bastian Bux (resident) put on one more treat after an indulgent season filling the Sunset Terrace with colorful human toy figures—some on stilts, others dancing on the bar—reminiscent of Toy Story, flinging colorful inflatable objects and confetti around as the music got nice and heavy in a bouncy way. With its playful and festive appearance and feel, Elrow brings playfulness to the scene, but it is not only games and play for this party, as the music is hardcore quality. With unmissable DJ Award-winner Frankey & Sandrino's “Acamar,” Baum & Bastian brought it home, leaving it to DE LA SWING & Toni. As El Salon greeted CoolMachines and EDU IMBERNON in the Main Room instigated everyone to "Let’s Go Dancing," the music in all the rooms was topnotch even though catching every act remains an impossible feat. Finally it was time for DEEP DISH, after a whole summer of waiting and rescheduling. With a gradual start and minimal beat, they took it easy on the brimming crowd with a subtle buildup that dove into deep space and a gripping sound that captured and enthralled the exploding room. As the bass line picked up to a trotting beat and their distinguishing vibe took over the atmosphere, Deep Dish did what it does best, bringing their original touch to progressive house, tech-house, and everything in between, their set was aurally stimulating and mentally inspiring. Meanwhile JOHN TALABOT in the main room, with a darker mood and sound, cantered between very contemplative moments and a thumping bass line. His electronica travels the line between dark, brooding, hard, and thundering for a techno with a ticklish feel to it—all this brought to life by the best sound system in the world with Space’s five million euro investment. Then Luciano came back on, this time b2b with JOSH WINK. Their b2b blended two different styles in a magical combo for an unusual but dazzling mishmash. Very acid and trippy, Josh’s sound offered a fine contrast to Luciano’s fervent range. Concentrated and smiley, Josh has a massive way with and control of sound. Further into the set, which went past the plotted two hours, they got harder and thumpier with some hard techno. Bringing on the tribal mixed with jazzy saxophone, the two played around with tunes pulling out the tribal in the crowd, that sense of communion intrinsic in human beings that is somehow lost in the world outside space. Is that perhaps what DJs do, bringing out that clan sense within human connection? Whatever the case, master of the universe of sounds, Josh later took it away on his own with his mesmeric beats. While the seeking souls ardently pursued that connection that comes from these nights of release where the pulsing beat and repetitive chanting vocals allow us to live and experience that closeness, long forgotten sounds from the 90s reemerged in Josh’s set. A machine, Josh went at it relentlessly. Even the lighting system at Space, with its intricate system of moving parts, joined in to create a paramount show of lights and lasers.

In the Terrace, the final part of Erick Morillo’s set was top notch. Then CARL COX & NIC FANCIULLI frolicked with tunes and sounds as the night turned into morning. There's a reason Carl Cox is among the most awarded DJs and continues to keep winning after all these years. Loved by all, the king of techno himself, with his inexorable energy and bubbly vibes he releases, was accompanied by Nic Fanciulli for a spectacular closing set. Both wearing funky hats, they were visually entertaining as well. Returning to revival their last hour, they pulled out the most unthinkable tunes, as the crowd got crazier, becoming a show in themselves, and the season concluded with outrageous and grotesque visions after 20+ hours of partying. For all music junkies out there Space in general and its Closing Fiesta in particular are unmissable experiences. The Mac Daddy of all parties, the Closing Fiesta not by chance concludes the weekend of epic closings. As most of the parties continue on to ADE, the moments of summer sunny days and moonlit nights remain within all Ibiza visitors as a light to be carried within, as everyone counts down to next season when Space will once again open its doors on 29 May, 2016.