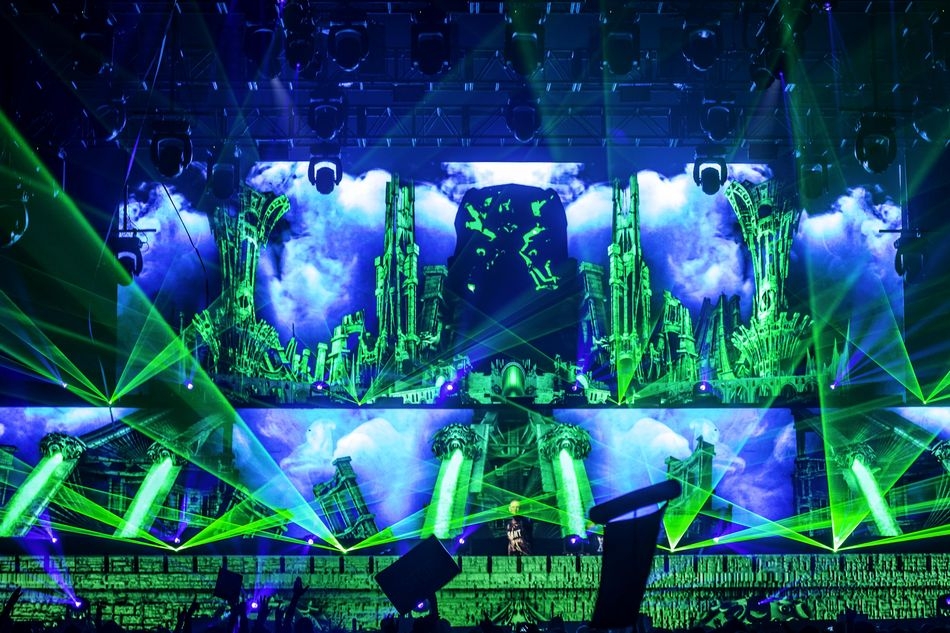 The Sound of Q-Dance Los Angeles: A Review

Hardstyle fans gathered outside The Shrine Auditorium and Expo Hall in Los Angeles on November 11th, chattering to one another in anticipation for The Sound of Q-Dance. You could feel the excited energy before even stepping into the massive, beautiful venue. The Shrine’s old-school architecture set as an intriguing backdrop, sharply contrasting the modern, electronic music that echoed through it’s walls. The show was an unforgettable one, composed of incredible music, an impressive sound system, and mind-blowing visual production.

The Sound of Q-Dance kicked off with a performance from SKYLAPSE, who provided a down-tempo hardstyle set - around 130-132 BPM. Attendees continued to filter inside, and Skylapse definitely set the tone for the awesome evening to come. By the time AUDIOFREQ took the stage at 8 o’clock, the visual production was in full effect and the auditorium was packed. The screaming audience welcomed Audiofreq to the stage as The Sound of Q-Dance intro played in the background. He delivered an awesome performance, incorporating his signature rawstyle tracks into his energetic set. When he dropped an insane remix of ALICE DEEJAY’s “Better off Alone,” confetti exploded into the air and the crowd erupted.

Psyko Punkz followed, providing an incredible set while maintaining the high energy level of the previous performances. Their mesmerizing visuals incorporated a medusa theme - with medusa and her head of snakes perched on top of a temple. The audience went wild when they dropped their popular remix of HARDWELL and JOEY DALE’s “Arcadia.”

Technoboy took the stage at 10 PM, and the medusa theme shifted to a circus from hell. The trippy carnival clown visuals featured piercing, aggressive colors which appropriately complemented TECHNOBOY’s hard-hitting set. The crowd exploded into absolute mayhem when he played fan favorites like “Devotion.”

Coone followed Technoboy’s aggressive performance, kicking up the energy another notch. His versatile set incorporated both hard-hitting, aggressive tracks as well as euphoric hardstyle tunes with mesmerizing vocals. It was purely magical when he performed his recent hit, “Into the Madness.”

Once COONE’s set came to a close, hardstyle veteran, ZATOX, took the stage. He played his biggest hits like “Wild, Wild West” and dropped an awesome remix of Showtek’s “FTS.” Zatox is known for his extremely energetic, almost abrasive style, and his performance demonstrated exactly that. He incorporates a signature “kick” that audiences fall in love with, and this evening was no exception. The already impressive laser show kicked it up another level, hypnotizing the audience to a further extent.

By the time EVIL ACTIVITIES took the stage at 1 AM, both the visuals and music were completely out of control. Evil Activities delivered a hardcore set, averaging at around 200-210 BPM. The Shrine Expo Hall erupted into complete madness.

Ultimately, the evening was an unforgettable one. While top-notch visual production and an earth-shattering sound system definitely contributed, the Q-Dance culture also played a huge role. Recent or new electronic music listeners purchase tickets to the bigger festivals, so massives tend to feature a more versatile crowd with a lot of “newbies”, so to speak. At The Sound of Q-Dance, on the other hand, you can feel the passion within every attendee. The sky-high energy level was, of course, partly the music, but partly the passionate fans. It was an incredible feeling being apart of that crowd. After the show, avid electronic music fan, James Rinehart, said "I've been to five Nocturnals, two EDCs, and a ridiculous amount of shows, and Q-Dance was the best and most fun show I've ever been to." All in all, The Sound of Q-Dance was a ridiculous, amazing experience, and I’ll definitely be back.

For more information on Q-Dance, check out their website here.