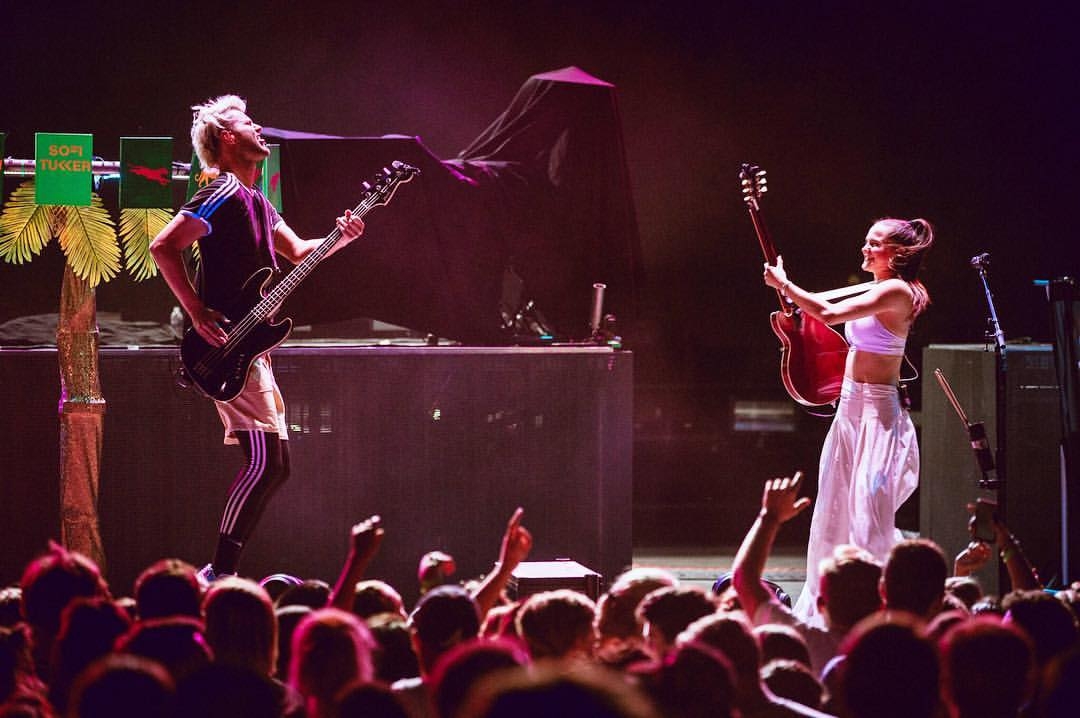 Sofi Tukker has had an incredible year this year and the duo is not slowing down. They just recently dropped a brand new single called "Best Friend" and it landed on Apple's official iPhone X television commercial ad. Now that is quite an accomplishment. From their earlier successes of hit single "Drinkee" they are now currently continuing their fall leg of their massive tour with ODESZA and CHET PORTER. We got a chance to catch up with them both at their performance at the Greek Theater in Berkeley, California for their 3 night sold out show.

You’ve been busy in the studio! Talk to us about your record “Best Friend” with NERVO, THE KNOCKS, ALISA UENO. What is the song about?

Tukker: Yeah it was a pretty fun one. It was a sort of a organic thing. I was with Sofi in my parent's garage and we should of started this beat thing and Sofi was on the phone with her best friend and she heard what I was doing and was so in love with talking with her best friend from college that she was like let me write about it and I was like perfect. She wrote a verse and we didn't know what to do with it and we have recently become friends with NERVO and they told us about this artist named Alisa Ueno from Tokyo that they manage. They were like if you ever want a Japanese verse (because they know we do different language stuff). So I hit them up and was like yo this one might be fun for a Japanese verse and they responded and they were like we love this record can we get on it too? I was like uh yeah. It's already about friends so lets just get a bunch of friends on there and have it be this fun thing so we called it "Best Friend" and it shaped up. It was really cool.

Sofi: Also, a really fun fact is the cowbell from that song is a Brazilian rhythm. It opens the song. One of the drummers from the show yesterday was like hey what's that song that starts with the samba?

Tukker: She's talking about the drumline because Odesza is touring with a big group of drummers.

Sofi: We got some Brazilian influence in there even if it's not that as obvious.

The record actually landed on Apple’s iPhone X ad…that’s a huge achievement for any artist. How do you feel seeing and hearing you own work on Apple’s ads?

Tukker: It was pretty crazy. That one was especially crazy because the ad was big news and we really didn't expect it to be a big commercial thing.

Sofi: It was really a shock to us and obviously it's an honor because I was listening to other artists on their iPhone ads growing up and that was a big thing. Yeah we're kind of still in shock and really grateful and lucky.

Tukker: It's going to be airing on television soon so it'll sort of be like worldwide as well which will be pretty exciting.

The music videos you make are always very creative and tasteful. Where can when can we see the music video for “Best Friend”?

Sofi: It just came out this morning!

Tukker: On YouTube! It was basically the most fun because NERVO has a residency in Ibiza and we went to play it and we decided like hey lets do the video while we're there and we had The Knocks and Alisa Ueno come as well. We just filmed us having so much fun.

We love the remix of “Fuck They” by BENNY BENASSI and MazZz. What got you into having these two rework it?

Sofi: We actually met Benny through a mutual friend. Then we started seeing him all the time. He is literally the nicest guy and we just kept staying in touch and we just asked him and he was like of course.

Tukker: We went to his Mixmag Lab in Brooklyn like 6 months ago and it was right near our house. We were like whoa that's crazy Benny Benassi is like right there. And apparently he wanted to meet us because "Drinkee" was a really big radio song and he knew who we were from that. So we met and we were delighted to meet him and it was very cool because he was delighted to meet us. We sort of stayed friends and saw him at all these festivals and we reached out and he was like yeah I love this track. It was crazy.

You’re on tour with Odesza and Chet Porter. How’s it been so far?

Sofi: I mean it's funny because Odesza are the nicest guys but I mean it.

Tukker: They're sooooo nice. They would like stand on the side and watch us perform. They also go out of their way to try and hang. I had lunch with them catering at Santa Barbara Bowl. They were asking about SOFI TUKKER and how we started and stuff.

Sofi: And meanwhile they had some huge things going on. The are the most ego-less guys. They're just so kind and always asking us questions.

Speaking of natural disasters, you raised some awareness on donations. How do you feel about recent mayhem from mother nature?

Tukker: I mean we feel terrible. We sort of just did the best we could. But we're hoping it would sort of rub off and other people would start doing things to raise money and awareness to people in need because there's so many people all over the world that are in need. Even more than usual with global warming and all sorts of things on top of already bad things that are happening.

Sofi: We wish there was more we could do. Another big part of what we're trying to do is knowing how the media portray things and we're hyperaware of how things are and we also want to be bringing really good things and some joy where you see radiant, happy and connected people. It's important for us to be spreading good news too. It's a hard balance, we're still learning how to navigate it. It's not like we can bring up something every day. There's so many things that are worthy of bringing up. We're trying to figure out what the balance is.

Tukker: I don't think we can say but we do have a lot of remixes coming out for "Best Friends" that we are really excited about. I don't think we can say exactly when the next single is coming out because everything is always kind of sort of up in the air and go with the flow and also we're not allowed to even when we do know. We have a lot coming. Super excited to get the video out. Then we'll get the remixes out and see what's popping when the commercial starts being on television for "Best Friends".

If you weren’t artists what do you see yourselves doing?

Tukker: I'd be a basketball player.

Sofi: I really don't know. I was studying conflict resolution. I was a mediator before. It's hard to think of alternate realities because I am happy with this reality.

What is one thing you are most proud of this year?

Tukker: I'm proud of Sofi for getting through a bad migraine and figuring out what was going on health wise and staying focused while she was really out for awhile. I'm proud of her and we can get through times when one of us is having a bit of issues and the other one has to step up. It's good to know what we have that.

What can we expect from you next year?

Sofi: A lot of music. And a lot of videos.

Be sure to grab tickets to see Sofi Tukker this fall on tour w/ Odesza* here. 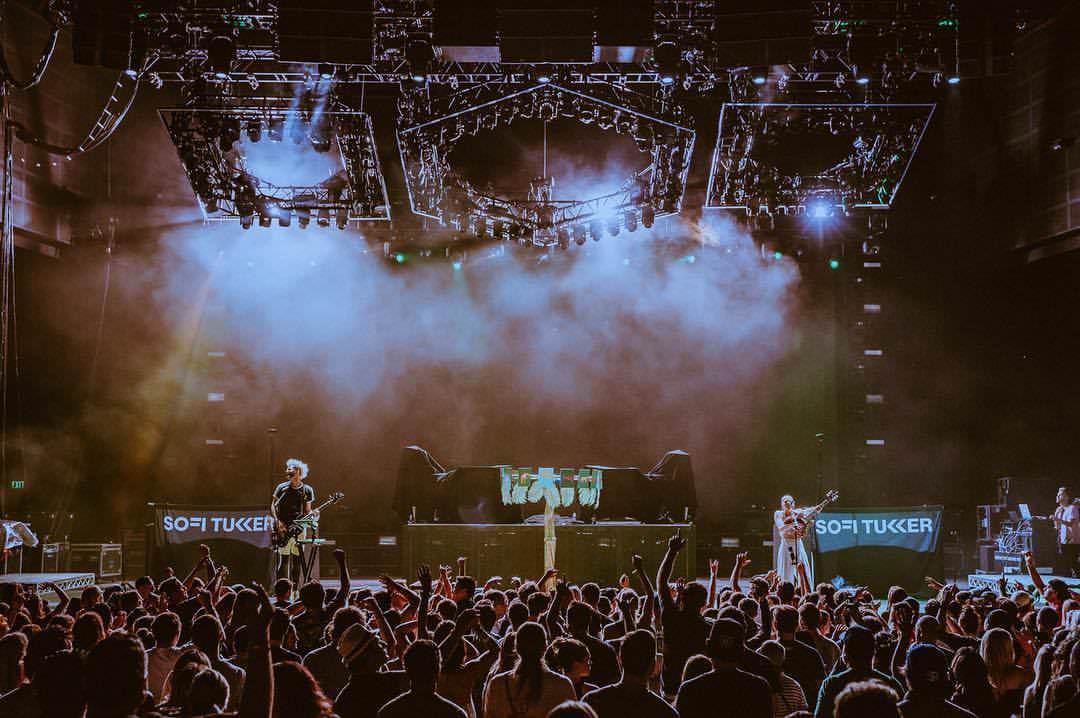