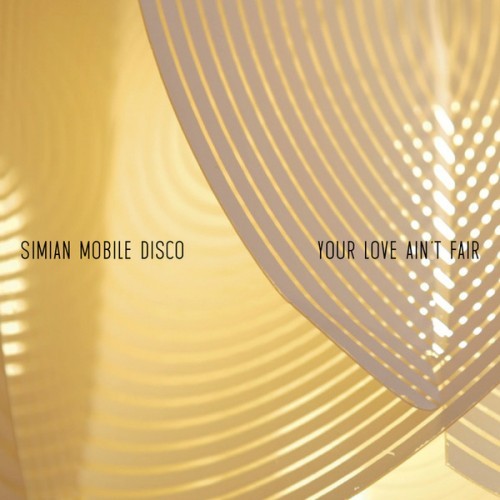 Simian Mobile Disco have returned in full force with the release of their slick LP Unpatterns. In my opinion their last album was (to put it bluntly) lacking. With the new release, the duo have fully rekindled exactly why I got interested in their tunes in the first place. Although it's a bit short, the whole vibe is anthemic. It's reminiscence of mid 90s trance and house, extremely modern synth programming, striking breakdowns, and very snappy percussion makes it one of the best albums of the year. Less is more for this one.

They've extended the dopeness into their new release Your Love Ain't Fair (EP), which was a major highlight of the album. The release includes the track itself, an extended mix, and a new track, Witches Of Agnesi.

The extended mix of Your Love Ain't Fair isn't exactly for all audiences, since it clocks in at around 6 and a half minutes, but the house heads will definitely be down. I love the variation by way of isolating certain drum elements compared to the original, and the subtle progression is great. Bottom line is that this track is perfect for any 4x4 sets, the extra length leaves plenty of leeway for smooth mixing.

Moving onto Witches of Agnesi, which registers in, even longer than the extend mix, at a whopping 8 and a half minutes (AIRHORN). Trippy echoing snares lead into a fuzzy, growling mid-range baseline, which opens up to some really interesting and symphonic chords. To truly appreciate the technical complexities, you need to hear this one on a good stereo, pure and simple. This track really reminds me of SMD's live show, and you can tell most of this track was improvisation and experimentation.

What I'm saying is get this release, you won't be disappointed. Recommended for fans of old school house, trippy sounds, and tits / acid (see what I did there).