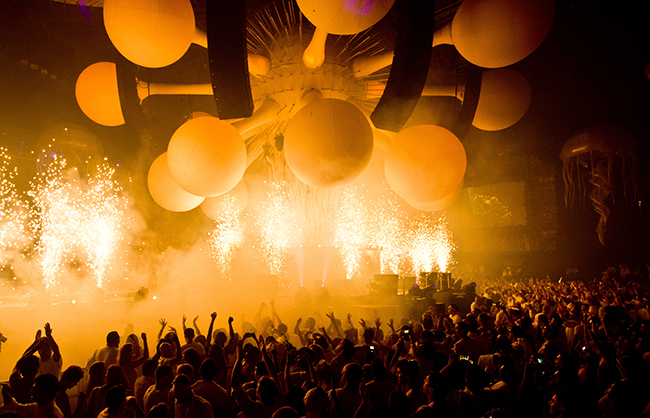 After producing more than 80 Sensation shows worldwide, attracting more than a million visitors in over 20 countries since 2000, ID&T (founder of Sensation in Amsterdam, 2000) proudly presented the famous ‘Ocean of White’ show yesterday at the Oracle Arena in Oakland.

Sensation has just kicked off its U.S. tour at the Oracle Arena. “The Ocean Of White,” is a production of water, fire and audiovisuals. Combining an ocean spectacle with world-class DJs that explodes to the beat of the music. All of us became part of a greater universe. This wondrous world of nocturnal sea life offered in-numerous possibilities. Acrobats shot from the ceiling, giant jellyfish hovered above the dance floor, as FEDDE LE GRAND guided the crowd through uncharted waters of mesmerizing grooves and melodies.

The night got progressively creative and quite impressive to say the least. MR. WHITE hosted the opening set with mermaids catwalking with a giant LED ball shortly after. NIC FANCIULLI continued the show along with DJ duo PROK & FITCH. With countless balloon and jellyfish performers we were throw into awe as we approached "The Mix" featuring pyrowheels and pyrowaves. As soon as the clock struck midnight, Fedde le Grand completely had the entire arena rocking out as the sensual performers made their way into the water fountains. Definitely a worthy start of the U.S. tour. The next show will be held on October 5th at the MGM Grand Garden Arena, Las Vegas. If you haven't got tickets, get them now!

Check out all pictures and tweets shared last night at live.sensation.com!