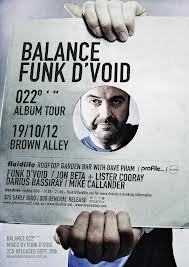 The much anticipated Balance album by FUNK D'VOID that comes out October 9th both digitally and CD. Funk D'Void really shows off his skills in his first Balance CD as he very quickly weaves in and out of tracks, crossing genres and sounds to create his story. The set has a rapid, fast-paced change as Chris Malinchak's “Razor 2.0” swings in with its melodic deep house vibe. The tone becomes darker as minimal sounds from ARKIST start taking over and then switches over to a more tech-house pace with TONKA. The set really takes off with the lovely chord sounds of JOHN TEJADA's edit of Soy Mustafa's “Return Of Annukai” and then transitions to Exercise One's “Lost Forever in a Happy Crowd” and its darker chords. You then hear more of a Detroit techno sound from legendary DJ DELANO SMITH, followed by Sam Matter's wavy-sounding track, which sets up the next track, “The Chase” by CHYMERA, perfectly. The tone has a dramatic deep feel from the likes of PEZZNER and Spirit Catcher, and leads to the crescendo of a Funk D Void's oriental-sounding remix that closes out with banging tracks by Toni Lionni and an unreleased Funk D Void track that was remixed by PSYCATRON.

The second CD starts off with an beautiful house track by KOLOMBO that carries a positive and floating sound, enabling it to transition seamlessly to a Lee Webster song. This CD has a much better flow to the first CD -- you can hardly tell when tracks switch over to the next. The feel is very much a 180 from the first CD, which definitely keeps with the Balance motto of showing two different kinds of mixes for each CD. The music transforms more into a electronica and break sounding quality towards the middle of the CD with Funk D Void's own remixes and JORIS VOORN's “Re-2001,” then turns a little darker with ROBERT BABICZ “Out of Order,” before changing into a jackin' disco house tune “Making Love” by Sunstream. The CD closes with Dennis Desantis, making you truly feel like you've experienced on a musical journey.

Funk D'Void continues the Balance tradition of having great DJs create amazing compilations, some of which include JAMES HOLDEN, DESYN Masiello, LEE BURRIDGE, and Joris Voorn, and Funk D'Void's newest addition will be a fine collection to add to your CD or digital library!