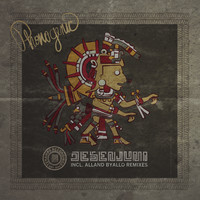 Not many people know of PHONOGENIC, but he has been producing music for quite some time with releases on Cocoon, 20:20 Vision and Last Night on Earth. Now he releases his newest EP "DesenJumi" with remixes by ALLAND BYALLO under Tenampa Recordings. DesenJumi takes you in a far away journey as it has a calm and relaxing worldly vibe to the song. You can actually visualize yourself in a different world as your listening to the song progress.

Alland Byallo's Bad Animal mix starts off with a more Detroit techno feel to it as you can hear the industrial claps throughout the song and then layers of the original mix fades in the middle of the track. As the song reaches the end, the techno and house sounds mesh in together to create a beautiful mixture of hard melodic music.

Brokedown mix has more of an earthly feel than the Bad Animal mix in the beginning, but as the song continues, a darker layer is added on and you get a mystical feel to the track. Both remixes keep the essence of the original track alive as you still can hear and feel the spiritual vibe that comes out of the song.

The EP also comes with another track by Phonogenic called Tired Being. This song has elements of DesenJumi and a darker tech-house vibe added on to it. This track has more of a dancing feel to it than DesenJumi. These tracks will be released on the mexican label Tenampa and will come out on beatport August 27th and will be a fine collection for DJ's who wish to take their listeners on a magical ride.