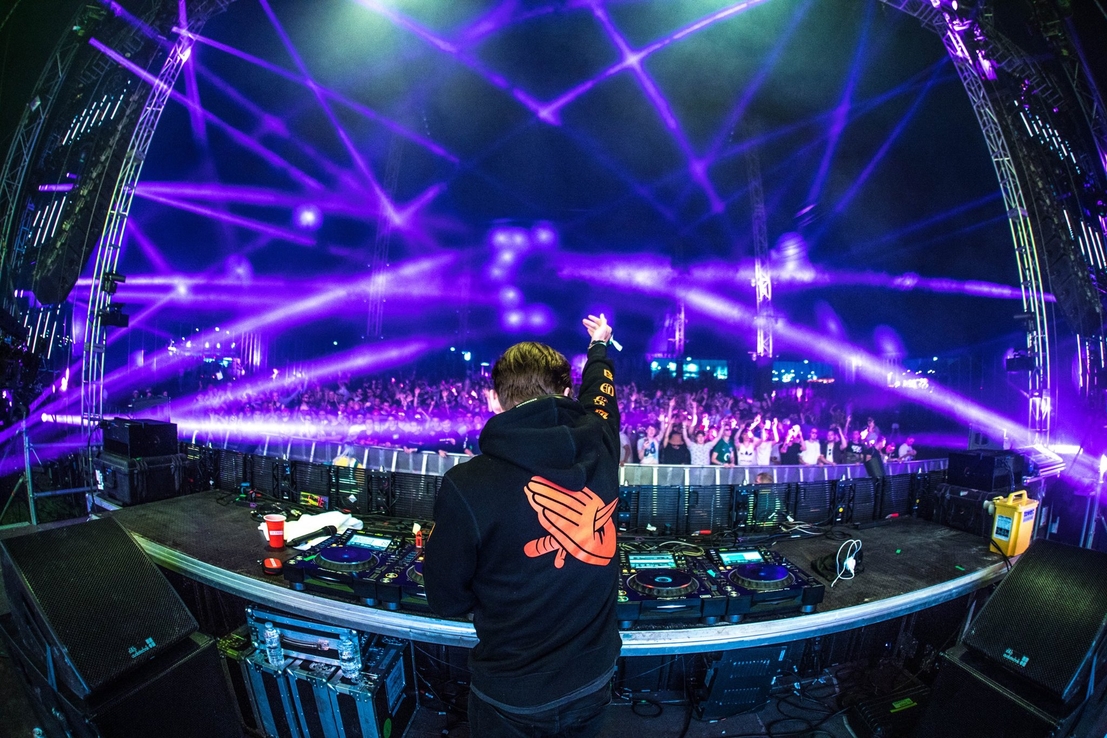 With a brand new collaborative record called “Bury” with BAD ROYALE featuring RICHIE LOOP, PARTY FAVOR is set across a massive tour and this time headlining with special guests such as FALCONS, FKI-1ST, GLADIATOR, GRAVES, KITTENS, KRANE, NOODLES, SAYMYNAME and TWO FRESH across the U.S. “Bury” is the latest track from Party Favor which features that addicting moombahton beat that we all know but with his signature sound. Together with Monster Energy, he's set on his "Tuned Tour" tour with a bunch of unreleased music as well. We got a chance to catch up with him before his performance at The Regency Ballroom in San Francisco this past weekend.

Talk to us about your latest collaboration with Bad Royale on “Bury” featuring Richie Loop.

Yeah man, that song is easily a year and a half old at this point. We made that song a long time ago and we were planning to do a collaborative EP together and made four other songs. They're all pretty dope. We never really released them and we waited too long. It felt outdated and started to second guess ourselves in that sense but we're really happy how it came together. It used to have different lyrics. It's just a fun track. I was playing that out for literally a year straight towards the end of the sets and I was getting such a great reaction I was like we gotta release this out.

You're on the road again and this time it’s called “Tuned Out Tour”. How has it been so far?

It's been amazing man. I'm always on the road so it's kind of the same old thing but it's really cool to be on an officially branded thing and have a set vibe of what I want to do. On certain dates, we're having full blown production like today. So yeah, I'm really excited.

Talk to us about some of your support talent and production.

Yeah so the production we made these amazing facade of all these old TVs but they were all hand built. Literally, there was so much detail, we kind of put the old and the new together in a cool way. It's something I always wanted to do and now I finally have the opportunity. I'm really excited to have the opportunity to do this production. Each show we been having special guest DJs that are in the area locally or local name artists that are pretty big. Tonight, we have a really big one coming out.

You also edited MAJOR LAZER’s and FLOSSTRADAMUS’ “Original Don” which is an incredible track. What made you decide to change it up a bit?

What's funny is I like to make stuff that goes in my set that people haven't really heard before you know? If it's something that haven't heard before or something that they don't know if it's familiar and what to revisit, I want people to be like oh wow that's a song that was from three or four years ago that was popping and now we have a chance to re-hear it again. That was something that I made awhile ago and I played in my sets for a long time. I just kept it to myself and a few DJs had it and fans were asking for it. Now, tonight, I will play the VIP version of it.

We absolutely love your new merchandise you just dropped. Can you share with us a bit about that?

I think for me I'm always trying to come up with new cool merchandise and not do what everyone else has been doing. At the same time come up with swimwear because girls love to wear that and I have a large female fanbase. One of the cool designs was we kind of ripped off the old escape and destroy logo and put "Party" and that was for my last EP last year. We got a lot of really cool stuff that will hopefully be dropping this year. 2018 is really going to be a big change for me, a whole new look, merchandise, vibe, production, etc...you'll see. It's going to be a cool transition. Check it out here.

We saw yesterday you made a beat in just 30 mins. How was that possible or what gets you into the creative mode?

Yeah, I got a challenge on social media like hey you should make a beat and show us how you did it. It was fun for me man, it was cool to challenge myself and also show people briefly how I work. I want to use the beat in something. It's 100% me. 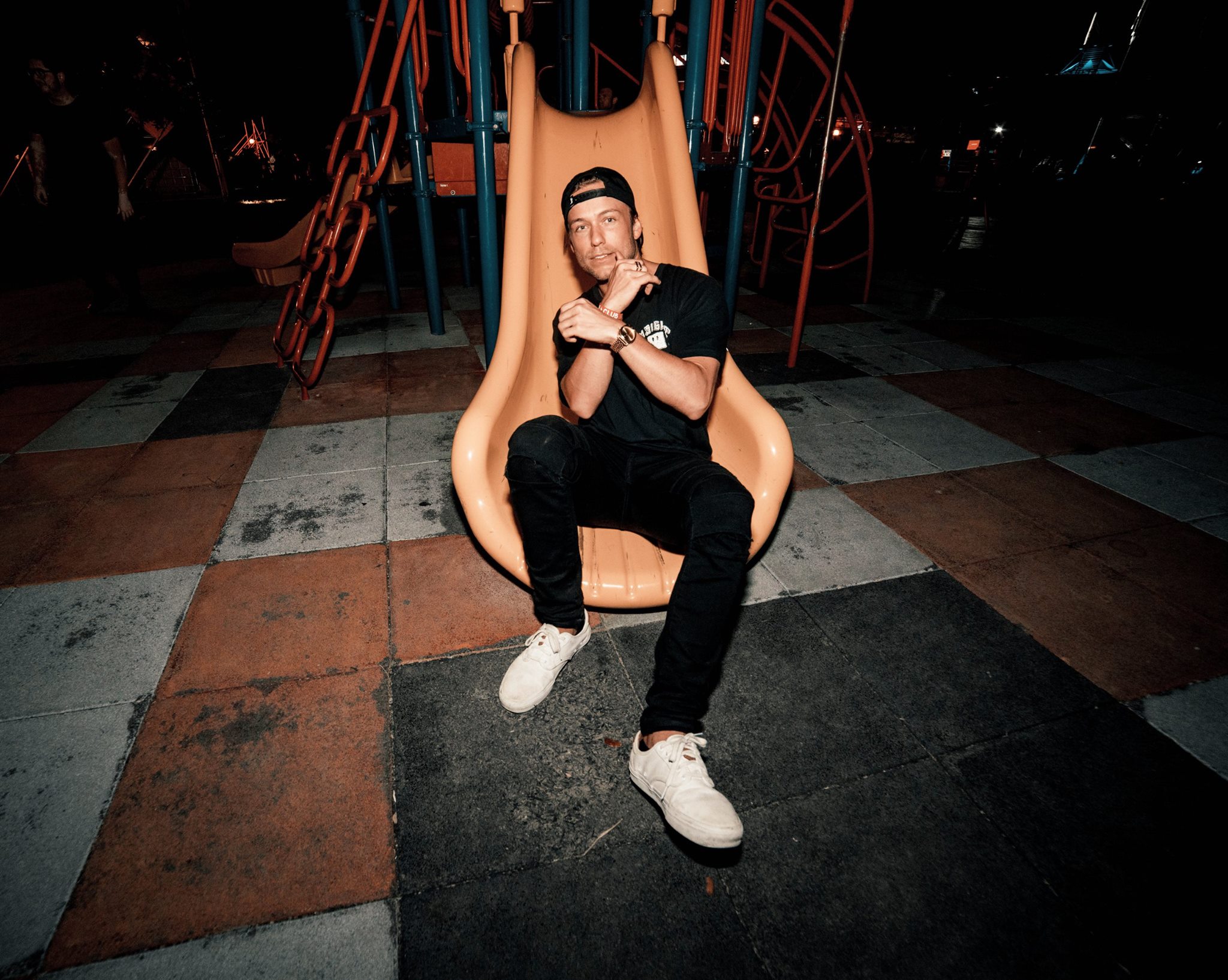 We already know you have some pretty dope remixes coming up because we caught a glimpse of what you tweeted earlier this week. Anything you can share about upcoming records?

I just dropped "Bury" and I am working on an EP in February to come out. That's my goal. I got a really big, secret side project that I am doing and that will be coming out next year. You will be hearing a lot about that towards mid Spring. On top of that, got a bunch of big remixes and "Chicken Soup" remix that I will play tonight. It's technically official but I don't know it if will come out officially. I think at a certain point in time I will just put it out.

Talk to us about your normal life when you’re not producing or touring.

Well, pretty much at all times I'm either working on music because ideas pop in my head all the time while I'm on the road or working at home. When I'm at home I like to spend a lot of time getting exercise, fresh air, going to the beach because I live right next to the water. Especially now I just try to take time to relax on this tour. It's cool, I've seen a lot of places I haven't seen in awhile and been touring a lot out of the country for the past couple of mouths. It's good to be back to the states.

If you weren’t an artist, what would you be instead?

Well I used to work in the film industry and I had a job there. A great job. I probably would still be there.

What is your favorite track you have produced to date?

That's a good question because there's a lot of songs that I am super proud of and some that I am working on right now that I am also super proud of but I would say the one song is probably going to be "Bap U" because it was such a huge song before me and it really pushed forward my name and brand so much. Everyone kind of has that one song that kickstarts their career. That was definitely one of the big ones, among other things, that really kicked it off for me.