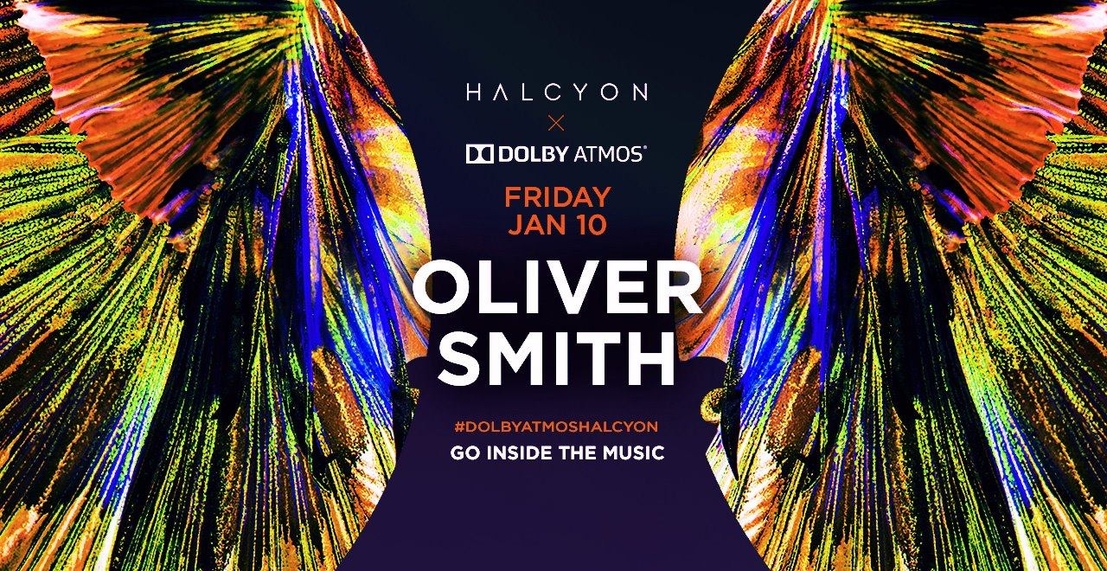 On Friday, January 10 ANJUNABEATS mainstay OLIVER SMITH returned to San Francisco’s Halcyon for an extended four hour set. Halcyon is the third venue in the world to implement the innovative Dolby Atmos technology, allowing for music to go beyond the bounds of stereo to create an immersive experience unlike any other. Sounds are thought of in relation to their movement throughout space with each speaker receiving its own audio feed. DJs can precisely place and move individual sounds through the room, giving the audience a sense of being inside the music itself. Dolby Atmos is revolutionizing the way artists produce music as well as how fans experience music live.

As the clock struck midnight, Smith took to the decks in front of a packed house. I found a spot on the stairs giving me the perfect vantage point. Everywhere I looked, I saw the Anjunabeats logo. We all knew we were in for a treat. His four hour set included hit smash hits “Curiosity,” “Lovingly,” as well as unreleased collaboration with ILAN BLUESTONE “Blue Eagle,” and the first Anjunabeats release of 2020 “Warehouse.” Lights arranged horizontally behind the stage and in starburst patterns across the ceiling came alive with the music, further enhancing the immersivity of the show. Energy was electric throughout but really picked up in the last hour and a half. It felt like a nod to Anjunabeats fans as he played tracks spanning many Anjuna artists. We heard ABOVE & BEYOND’s “Always,” 3LAU’s “Tokyo,” ANDREW BAYER’s “Magitek,” TINLICKER’s remix of “Out of Touch” and so many more it’d be impossible to list. Tthe crowd never let up, continuing to dance and sing along even as the clock crept toward 4:00am.

“The night was a blast! It was great to see him play an extended set and drop some progressive for the first hour or so, something I’ve never been able to see from him,” said Shane Smith.

Loyal fans known as the Anjunafamily have garnered a large community, with San Francisco being no exception, and came out to Halcyon in full force.

“Oliver Smith played the best set I've ever witnessed. I loved singing along to all the hits with the family. As the club cleared out around two you could tell there was mostly Anjunafam left. It was magical and gave me such a warm fuzzy feeling,” said Lisa Felice.

Anjunabeats and the Anjunafamily transcend beyond the music to connect fans and forge bonds through a shared love. For Raj Chetal, this was particularly true on this night.

"Before the show I was in an internal debate on if I could attend because of my best friend’s life having just ended unexpectedly. I messaged Oliver Smith on Twitter that I would come to get my mind off things. He responded to my tweet and stated that he was excited that I was coming. His entire set was so therapeutic and it was like his music spoke to me and was consoling my emotions. I had so many good feels like I always do but this time it was special. My emotions were in tune with the music and I danced straight from the time he opened to the time he closed,” said Chetal. “What a great way to start 2020 with such an incredible DJ that threw down my favorite set of his to date. Oliver Smith’s set felt like a beautiful narrative story that was communicated through music.”

Oliver Smith is set to play across the U.S. and Europe in the coming months including an appearance at Anjunabeats Explorations in France. For more information on his tour dates, visit his official website.