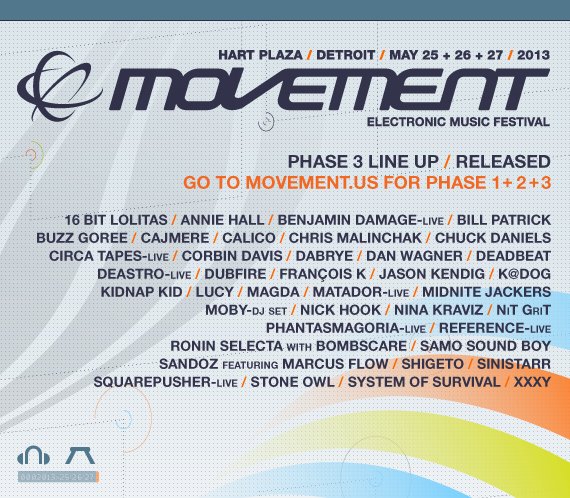 THE 2013 ELECTRONIC MUSIC MIX CHALLENGE PRESENTED BY MOVEMENT and 8tracks

The third phase of the lineup includes an electrifying live set by UK’s electronic music icon Squarepusher as well as a dj set from famed singer, songwriter and producer MOBY. DJ and Grammy Award-winning producer Dubfire returns to the festival as does Movement’s 2012 standout artist Nina Kraviz. Dubstep’s rising star Danny Beall, commonly known as NiT GriT, has also been added to the list of performers.

The complete list of the additional 39 performances announced today, in alphabetical order, are as follows:

Movement Electronic Music Festival, in collaboration with techno music pioneer and 2013 performer Carl Craig and 8tracks, one of the largest global internet radio services, present the 2013 Electronic Music Mix Challenge. Starting Monday, April 8, fans will have the opportunity to create their very own Movement-inspired mix on 8tracks. The lucky winner, selected by Carl Craig, will receive a pair of VIP tickets to Movement, official festival gear, featured placement on the 8tracks homepage and its mobile apps, and a complimentary one-year subscription to 8tracks’ premium service, 8tracks+.

"8tracks is thrilled to collaborate with Movement on the inauguralElectronic Music Mix Challenge,” says David Porter, founder and CEO of 8tracks. “For the past 25 years, I've been a fan of the sounds and culture of electronic music, which inspired the founding of 8tracks. I'm pleased that we can contribute to Movement in this unique way and I'm honored to have Carl Craig participate in the selection process,” adds Porter.

Discounted tickets for Movement are on sale now ($89 Weekend / $199 VIP), and can be purchased by visiting www.Movement.us. Ticket prices will increase on May 1.

The Movement Electronic Music Festival features: five technologically-rich outdoor stages; more than 115 artists; free Wi-Fi access on the grounds; a posh VIP setting located behind the main stage; dozens of official afterparties; an interactive technology center featuring the hottest gear in the industry; and several art displays to stimulate the senses. Over 107,000 people from around the globe attended the 2012 festival.