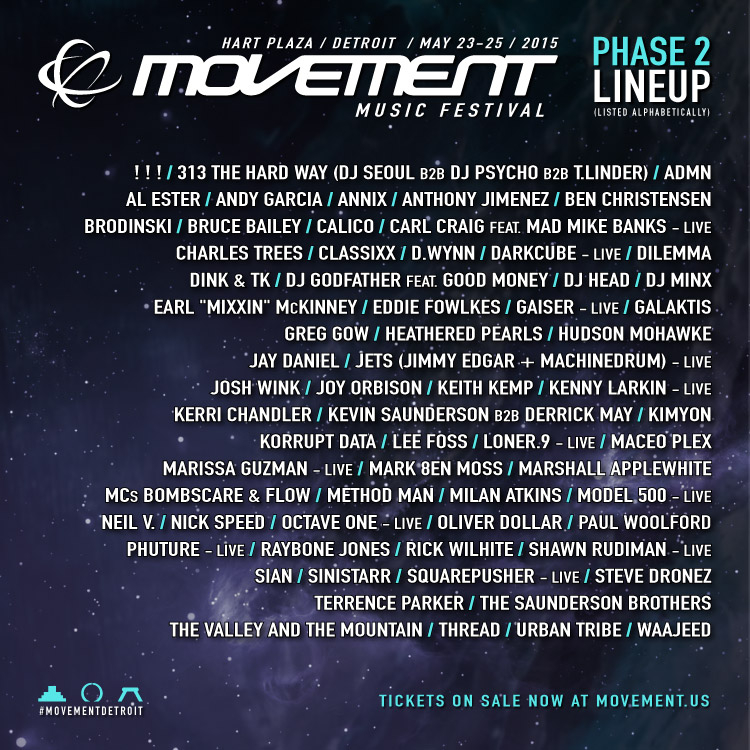 Paxahau Events is pleased to announce the phase two and final lineup for the 2015 Movement Electronic Music Festival, taking place Memorial Day weekend, May 23-25 inside Detroit’s legendary Hart Plaza. After a massive phase one lineup announcement earlier this year, the globally distinguished and independently produced three-day event is adding 67 more artists to its wide spectrum of up-and-comers, local luminaries, pioneers and trailblazers in Techno, House, Hip-Hop and more, featuring a live performance by the incomparable SQUAREPUSHER as well as dance-punk band ! ! !, Bromance Records label boss BRODINSKI, House music legend KERRI CHANDLER and Hip-Hop icon and Wu-Tang Clan member METHOD MAN. The 141 performances represent the most the festival has booked to date.

In addition to maintaining its status as one of the longest-running independent music festivals in the country, Movement continues to embrace its founding principle of promoting underground artists and Techno heavyweights. "Techno (music) was something we promoted over two decades ago in abandoned warehouses in Detroit - few knew where this music was going," says Paxahau founder Jason Huvaere. "And we continue our mission of cultivating and promoting the genre and its artists to the rest of the world. It's redeeming to see how influential Techno has been on many other promotions across the country."

Techno pioneer and hometown hero Juan Atkins is celebrating 35 years in the industry with a special performance at Movement under his iconic alias MODEL 500. To mark this milestone, the legend will also bring longtime collaborators as well as new talent to celebrate 30 years of Metroplex Records – Atkins’ iconic label whose catalogue reaches back to over three decades of futuristic sounds and releases, including No UFO’s, Night Drive and Ocean to Ocean, just to name a few. "I am surprised that it has been that long ago. I remember it all like it happened yesterday!" says Atkins. "I really didn't want to start a label at first, but after being overlooked by so many labels, I just wanted to put my music out. I never really got full support from any label then, or even now!"

In a nod to the festival’s continuous support of local talent, Movement 2015 is collaborating with some of Detroit’s most celebrated names and figures to curate multiple showcases throughout the weekend, including the return of KEVIN SAUNDERSON’s highly acclaimed ORIGINS – a celebration of originators, torchbearers and next wave creators of Techno and their cross-generational influence on each other.

Detroit’s native sons CARL CRAIG and Mad Mike Banks will perform a rare set together as part of Detroit Love – a new concept from Carl Craig, designed to bring together and support the sounds of Detroit and take a little of the Techno brotherhood to clubs and festivals all over the world.

Konkrete Jungle Detroit will host a full day of Drum & Bass music from the city’s best and brightest talent, including performances by KJDET co-founder DILEMMA and SINISTARR.

As previously mentioned, Guy and Howard Lawrence, the Grammy-nominated duo behind Disclosure will make their festival debut and perform alongside some of their favorite acts for their traveling Wild Life showcase.

The 67 performances announced today, in alphabetical order, are as follows:

The Movement Electronic Music Festival takes place every Memorial Day weekend inside Hart Plaza – Detroit’s legendary riverfront destination. The festival features: six technologically-rich outdoor stages; more than 100 artists; a posh VIP setting located behind the main stage; dozens of official afterparties; an interactive technology center featuring the hottest gear in the industry; and several art displays to stimulate the senses. Over 107,000 people from around the globe attended the 2014 festival.