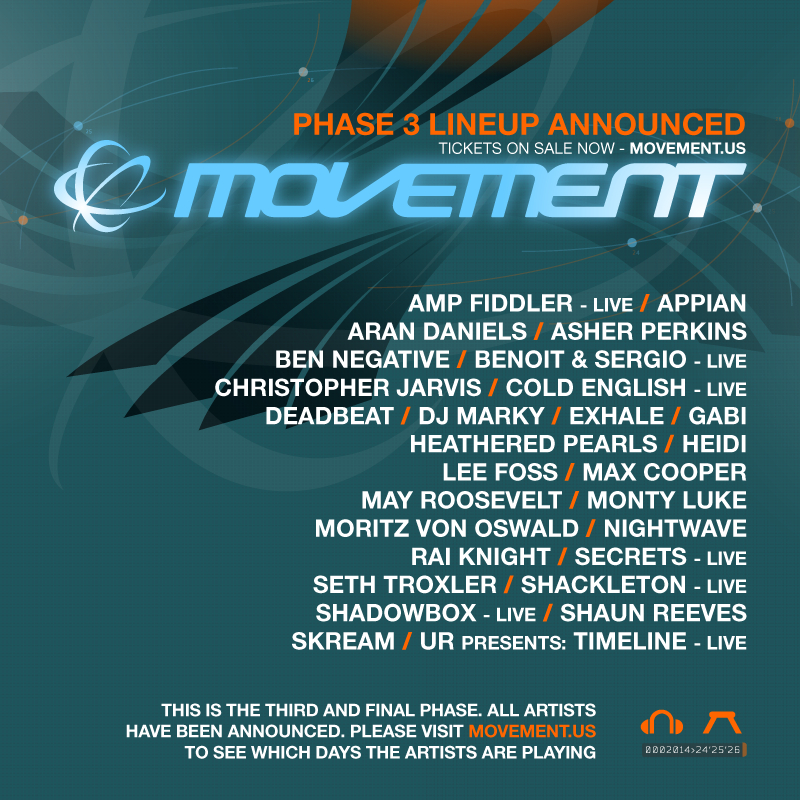 “We’re ecstatic to have Underground Resistance performing at the festival,” says Jason Huvaere, Movement festival director. “This will be a rare opportunity for fans to experience a profound group of Detroit artists that have been instrumental in revolutionizing dance music culture since the late 1980s,” he adds.

UR founder, Mike “Mad Mike” Banks, keyboardist Jon DIXON, saxophonist DeSean Jones and DJ Mark Flash will perform Timeline – a musical chain running from the past through the present and into the future with an emphasis on techno and jazz elements – what is known as “hi-tech jazz”. “What you will be seeing on stage is the future of Detroit,” says Banks. “Jon Dixon and DeSean Jones have taken UR’s hi-tech jazz sound to a new level. This is the future of jazz!” he adds. Tickets for Movement are on sale now and can be purchased by visiting www.movement.us. The cost for a three-day weekend pass is currently $130 and grants fans general admission access to the festival grounds with in-and-out privileges. The cost for a three-day VIP pass is currently $260 and includes many extras that can be found on the website. Check out the official Movement 2014 trailer online.

The Movement Electronic Music Festival takes place every Memorial Day weekend inside Hart Plaza – Detroit’s legendary riverfront destination. The festival features: five technologically-rich outdoor stages; more than 100 artists; a posh VIP setting located behind the main stage; dozens of official afterparties; an interactive technology center featuring the hottest gear in the industry; and several art displays to stimulate the senses. Over 107,000 people from around the globe attended the 2013 festival.