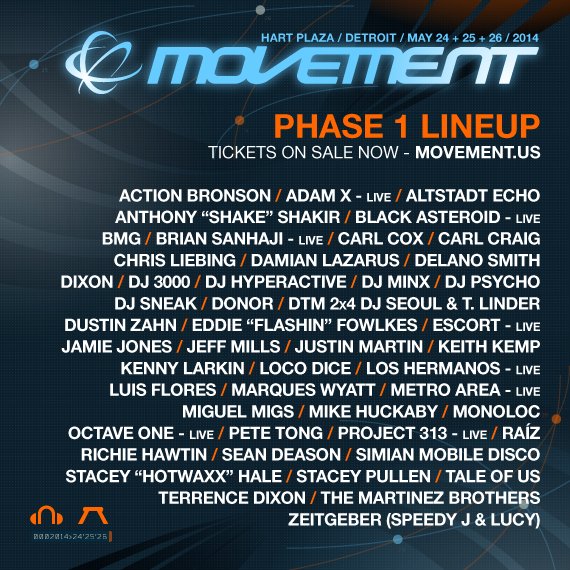 The 2014 Movement Electronic Music Festival makes its way back to Detroit’s Hart Plaza on Memorial Day weekend, May 24-26 for a three-day celebration of dance music and the people that make it great. 2014 marks the festival’s ninth year and promises to be the best one yet with a staggering assortment of rising talents, local heavyweights and pioneering legends.

Famed Radio One broadcaster, DJ and current Evolution Radio host, PETE TONG, whose name has been ubiquitous with dance music for decades, will make his Movement debut in 2014 as will rising hip-hop star, ACTION BRONSON. The Queens-based MC (and notable culinary expert) recently released Blue Chips 2 with production duo, Party Supplies – a follow up to 2012’s critically acclaimed Blue Chips album. Techno titans Speedy J and Lucy will perform as the collaborative duo Zeitgeber for the first time in the U.S. The duo released their self-titled album this past summer through Berlin-based Stroboscopic Artefacts. This is also Speedy J’s first album collaboration since 2005’s LP Collabs 3000 : Metalism.

A large number of local artists are included in the announcement today, fortifying the festival’s unwavering support of Detroit and the artists within. This includes one of Detroit's favorite sons, Grammy-nominated DJ/producer and Planet E chief, CARL CRAIG; the legendary JEFF MILLS; and Techno-soul pioneer, Eddie “Flashin” Fowlkes, just to name a few.

“We really wanted to have some fun with the lineup this year and showcase artists that continue to reinvent the wheel of electronic music as well as a slew of hometown favorites who are legends in their own right,” said Chuck Flask, artist coordinator for Movement Electronic Music Festival.

The 49 performances announced today, in alphabetical order, are as follows: