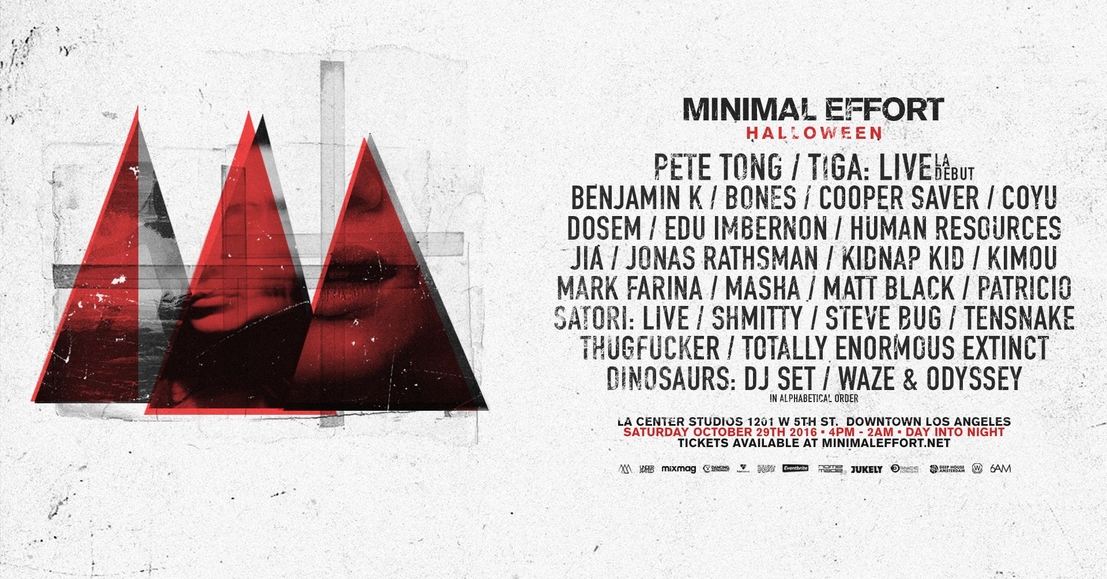 We are proud to work with Minimal Effort once again to have a ticket contest for our fans in Los Angeles. The party is on Saturday October 29th • 4pm to 2am • Los Angeles Center Studios • 1201 W 5th st. Los Angeles, CA. 3 indoor and outdoor stages, 24 DJs and 10 hours of music in the heart of downtown Los Angeles.

Over the past three years Minimal Effort has come to represent a shift in the paradigm of modern rave, a beacon of light for the North American underground and a contender for the global electronic spotlight. Today, with the brand’s expansion to a full-scale festival laid before it, Minimal Effort has announced its most impressive lineup to date for its October 29 event at LA Center Studios featuring a who’s who billing of dance music’s finest. In what has become thoroughfare for Minimal Effort’s dedication to ahead of its time bookings, attendees for this year’s Halloween festival will be treated to sets by titans like PETE TONG, DOSEM, EDU IMBERNON, JONAS RATHSMAN, Totally Enormous Extinct Dinosaur, KIDNAP KID, and MARK FARINA, a standout pairing of TIGA’s Live LA Debut and SATORI: Live, plus underground heroics by legends STEVE BUG, TENSNAKE, THUGFUCKER, WAZE & ODYSSEY, COYU and HUMAN RESOURCES with more to be announced. From dark warehouses to historic venues, Minimal Effort has spent years solidifying its positioning as leaders of the Los Angeles underground and flag bearers of more meaningful shades of electronic music. Those who have grown with the brand know their creative take on production and experience crafting,and those who don’t will be treated to the spectacle in store at LA Center Studios set before the iconic skyline of Downtown Los Angeles. It is this keen sense of experiential magic and an ear towards the purely authentic sounds of tomorrow that represent the pillars on which the Minimal Effort movement rest.

Headed to Minimal Effort: Halloween 2016? Save on hotels and reserve at The Westin Bonaventure Hotel & Suites, Los Angeles.