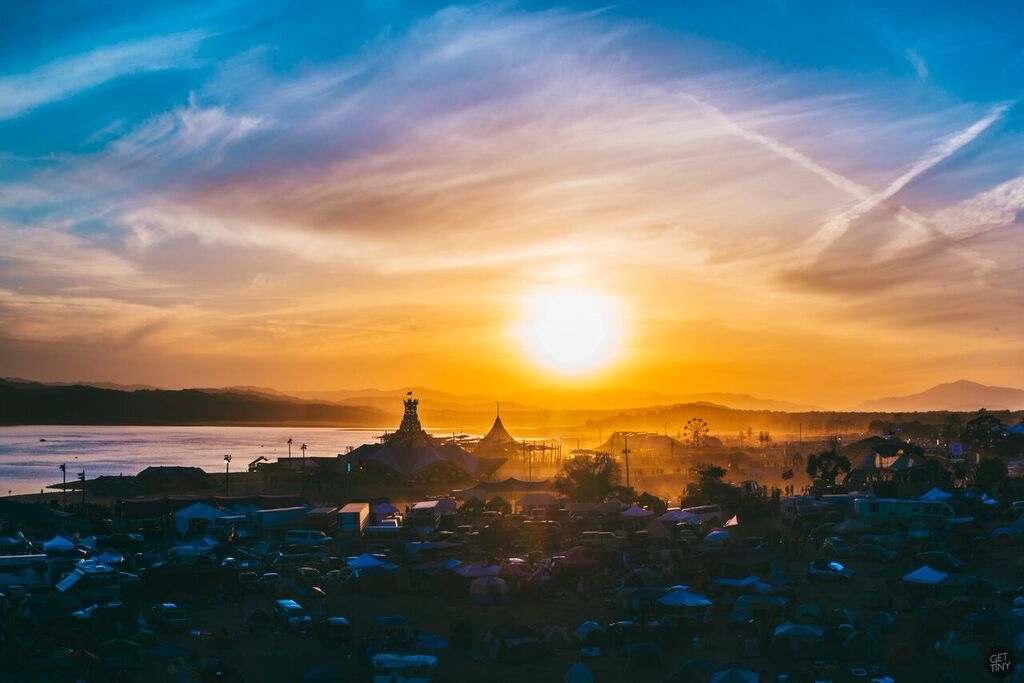 Lightning In A Bottle Once Again Sparks Our Hearts

"Wake up every morning and make the world a better place just by shining that gorgeous smile on your face." The Street Feather Project As I return home and gather the dust off my kaleidoscope of treasures, my mind continues to be entranced by the sorcerers at Do Lab. Lightning in a Bottle once again set the stage for magic, mystery, and intrigue on the newly revived Lake San Antonio over the Memorial Day weekend. While modern American families were at home barbecuing and pounding beers, people here were dancing in the sunshine and flowing through the waters. If you craved some funky bass you could frolic towards the Thunder stage, but if that wasn't your vibe intergalactic grooves awaited at the Woogie. Within this paradise, many curiosities awaited to enchant the hearts of many. The festival holds infinite keys to its success including the curation of music and live acts accompanied by the thousands of illuminated souls who are important to the recipe of what makes LIB an oasis. A fraction of what makes this festival immaculate is its stellar line-up of artists that usually features diversity among genres and big names in the scene! This year we were blessed to have BASSNECTAR, BONOBO, RUFUS Du Sol, KAYTRANADA, BOB MOSES, BIG WILD, RICHIE HAWTIN, and TROYBOI along with many other talented performers to astound and amaze. This marked my sixth year at LIB and with each new experience; I can see how this festival has found a home in my soul. To this day, I still reminisce about my first Lightning in a Bottle back in 2012. I remember being at the top of the mountain, as I was in a sauna amongst beautiful strangers singing of the ocean waves blissfully in the nude. By the time I left the haven and stepped back into the music, my phone was dead and my ride ended up leaving without me. I panicked and I was stranded with no tent and no warmth, but instead of worrying I found an after hours dome and danced until sunrise. I made some nocturnal friends with a man in a giraffe mask and a burner holding a sign that said GLAM. Good times were had. And of course, who could forget how GRIZ stole my heart with his rainbow laser beams dancing across the night skies in 2013. Each year, infinite moments glaze across me, but there are always a few that resonate deeply within. The author and his new Giraffe friend at LIB 2012

As I arrived on Thursday, I was alleviated to be camped in the Boutique area which made a lot of the stress that comes with camping festivals dissipate. The amenities included were private restroom suites along with outdoor showers and a Lush Lounge where I ended up retreating from the massive heat waves. I tried to put together a syllabus for the weekend which included some workshops I couldn't miss and artists that I had to experience live, but in the end I just followed wherever I felt I needed to be. With intuition as my guide, I was led to some pretty epic moments that ignited my experience. With that said, here are some of my highlights from Lightning In A Bottle 2017. Madame Gandhi, also known as a former drummer for M.I.A. impressed me as her alluring melodies set the vibe of the Lightning stage for the weekend. She was a powerhouse with her evocative and sultry beats melting off the speakers. Her energy was positive as the tunes were rocking and she even delivered a powerful excerpt from The Feminist Utopia Project during her set meant to empower the women of LIB. In honor of M.I.A. she even dropped Double Bubble Trouble in her set followed by an original called Yellow Sea, which was about the rise of the sun. The serendipity couldn’t have been sweeter since the elusive sun hadn’t shown its face much on Thursday.

This cinematic presentation takes you into the mind behind psychedelic artist, Android Jones, as he creates a virtual world projected throughout a 360-degree dome. It started off innocent enough and looked like something straight out of a DMT trip that induced an altered state of reality. Eventually, the images transcended into a metaphor representing the balance of life. The chaotic harmony of radically diverse images and deities combined beauty with the darkness of the world. A photo I snapped quickly via iPhone.
Two Feet

Two Feet is an up and coming artist from New York who gained fame overnight with his song Go Fuck Yourself. He stated that it went viral almost immediately after posting the track online. The most endearing thing about his set was the fact that LIB was his first festival to debut his project at, and what a place to do so. The crowd at LIB applauded his creativity as he sung soulful and sexy beats reminiscent of CHET FAKER (aka NICK MURPHY). He played one of my favorites Quick Musical Doodles, and even a jazzy cover of Ain't No Sunshine. He ended his set with his most followed song that people were anticipating to hear live. The elation was so high that he even did an encore of the same song in which he concluded, “I’m not even sure if I’m allowed to do this.” Two Feet also has a new EP called Momentum out today, so check it out if you can't get enough of his majestic beats!

The Do Over Salon

This was an interactive piece that was the epitome of a raunchy game show unfolding right in front of you. Three contestants were chosen at random to do something humiliating in front of an audience, and after they would spin the wheel of fate to see which makeover awaited them. The choices varied from Gaga, to Star Wars, Bowie, Punk, and even the stylist’s choice! During a segment in which people had to perform vegan porn, an infant was spotted in the audience. The host seemed a bit shocked and with a sigh of relief he stated, “You’re too young to remember any of this traumatizing experience anyway.” Getting Personal with BORETA and RHYE

Unfortunately, I didn’t make it to many workshops, panels, or talks this time around, but as I saw Intimate Fireside Chat with Boreta + Special Guest I couldn’t help but be curious. I arrived to discover that it was a Q and A type deal with Boreta doing the interview and Rhye being the guest. Rhye has created a following for himself with his compassionate lyrics and his sensual yet seductive voice. He even did vocals for a song titled Break Apart on Bonobo’s latest album, Migration. They spoke about many things relating to their music creating processes, how to get over writer’s block, Rhye’s alias and side project MILOSH, and my favorite was when they spoke about music as spiritualism. Music is a sacred healing device for many and as Rhye even stated, “I think exploring or journeying into sonic scapes is really important or cathartic.”

As I was making my way to the Pirate’s Landing (my nickname for the Tall Ships aquatic art), I heard a familiar tune by the Thunder stage and realized EDIT was playing Fortune Days. He was joined on stage by Boreta and OOAH for an impromptu Glitch Mob reunion. The last track of the evening was a preview off their latest album that’s in the works and featured some chaotic and wavy bass lines that sated the wobbling humans. As they ended their set, they closed out with some words of gratitude, “Thank you so much to the Do Lab for providing a place to grow, be creative, and love one another.” Amen to that. <3 Only at Lightning in A Bottle is it totally normal to have the nightly ritual of watching the sunset at the Mediation Lookout. Howling as the sun escapes and welcoming the moon and the stars was common practice here. Nighttime is creature hour and this change in pace offered a different mood at LiB. The sunset was a catalyst to activate the wonder and awe that awaited within the glowing environments beyond. These guys were sort of like the Banksy of LiB, but instead they decorated the venue with positive heartfelt messages scattered about that could lift any broken spirit. The point of coming to these festivals is to escape reality and the default world for a bit and to immerse oneself into the best time to be had. Bonobo and the Sea of Totems

Much to my dismay, I had to leave early Sunday night, but before departing I decided to close out my weekend with the mystical Bonobo. He has many hits and fan favorites in his discography, so I wasn’t sure what to expect, but it was nice to finally experience Kiara and Flashlight with a live band right in front of my eyes. While I was at his set I couldn’t help but notice the flourishing sea filled with twinkling totems that stretched across the vastness of the stage. The vibes here were on point and I let my gypsy self glide with the music. He concluded with Know You as streams of euphoria rushed down my eyes. EVERYTHING ABOUT THIS MOMENT

The weekend itself was a blessing and a curse at times, but in the end, I still hold an infinite amount of gratitude for the producers and everyone involved to make this gathering of the tribes and vibes happen. This alternative universe welcomes all and allows you to be your divine self in a realm of curiosity and psychedelic magic. Lighting In A Bottle, thank you so much for electrifying my life and filling my veins with nothing but effervescent melodies and shockwaves of love! I'll see you next year. :) Relive the glowing memories with the 2017 recap video below.

Don't miss out on your chance to get ahead by purchasing Super Early Bird passes for Lightning In A Bottle 2018. They will be going on sale on June 10, 2017 at 10 AM.

Follow LIB and Do Lab via their socials for more information on ticket sales and upcoming events!