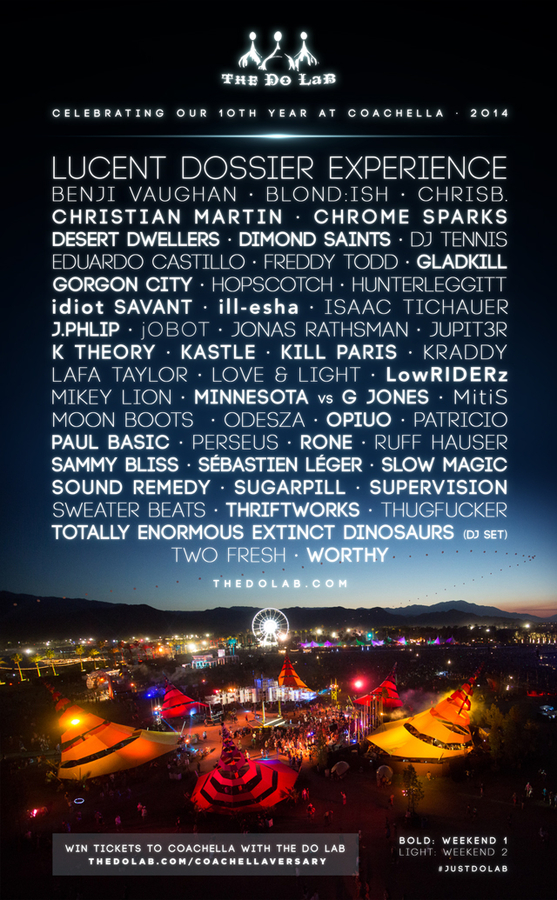 There's nothing that commences Festival Season quite like Southern California's Coachella Valley Music and Arts Festival in Indio, California. Back in 1999, during the festival's inaugural year, Coachella lasted for a mere two days and only used five stages - the Coachella Stage, Outdoor Theatre, Mojave Tent, the Gobi Tent, and every dance lovers home for the weekend - the Sahara Tent. Now, fifteen years later, Coachella spans two three day weekends and includes the Oasis Dome, the Yuma Stage and last - but certainly not least, the Do Lab Stage, which is celebrating it's tenth year at Coachella this April!

The lineup for their stage has always been fashionably late compared to the rest of the festival - but as things usually are, it's well worth the wait. Manned by the amazing production team that throws Lightning in a Bottle, The Do Lab stage boasts this year live entertainment and performance art from the following acts (in order on flyer)-

Suffice it to say, Southern California's seminal music makers have simply outdone themselves this year. To boot, this should only serve as a teaser for things to come at Lightning in a Bottle later in May! Keep up to date with all things Coachella and Do Lab through their socials -