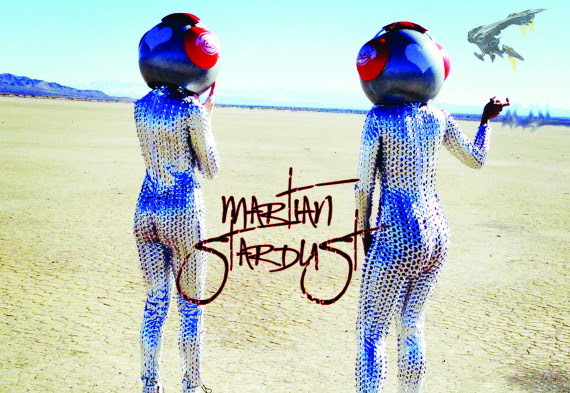 KALM KAOZ and its label, MASSIVE DECKS, announced the release of their first music video, filmed and directed by the renowned Jasper Faber hailing from Amsterdam. The video’s track is from KALM KAOZ’s upcoming EP entitled, K-HOLE, and their “ZIGGY STARDUST” release.

This video is complex, beautiful and alien, capturing KALM KAOZ’s musical vision of their “ZIGGY STARDUST” track. The video was directed and filmed by Jasper Faber, famed Director/Cameraman hailing from Amsterdam, Holland. Mr. Faber is known for his work on TV commercials, documentaries, music videos and his profoundly unique form of filming. KALM KAOZ noted: “Mr. Faber’s talent is incredible. He films video live, bringing in unique and powerful effects on the fly, changing lenses constantly. His camera work is much like DJing live - the effects and essence he achieves cannot be replicated in post-production. Simply a must watch.”

The “MARTIAN STARDUST” Art Director, Ms. Joyce Collin of Joyce Collin Styling, helped manifest the vision for the “MARTIAN STARDUST” video. Ms. Collins’ vision of a high-fashion “alien vibe” tribute to Mr. David Bowie’s genius has a powerful impact on the video. The combination of Mr. Faber and Ms. Collin’s talent created a work of art. In an age when music videos have lost potency, the “MARTIAN STARDUST” video stands as juxtaposition. It is a rare treat to the eyes, creating a powerful connection between KALM KAOZ’s track, “ZIGGY STARDUST”, and the alien essence of the storied history of the original track.

Mr. Peter Forelli, owner of White Bridge Productions, a motion picture production company and studio based in New York, produced the video, bringing together KALM KAOZ, Mr. Faber and Ms. Collin. After hearing the KALM KAOZ “ZIGGY STARDUST” track, Mr. Forelli was enthusiastic about the project, stating: “the track is powerful and open to many possibilities on the filming and creative side. The combination of KALM KAOZ’s “ZIGGY STARDUST” track, coupled with the unique video is potent and will leave a powerful mark on the dance music community.”

KALM KAOZ is thrilled to work with this level of talent, stating “KALM KAOZ is overwhelmed with the video and the entire team’s effort to create something new and worthy. The video is breathtaking, captures the essence of our track, and stands out within the dance music video genre.”