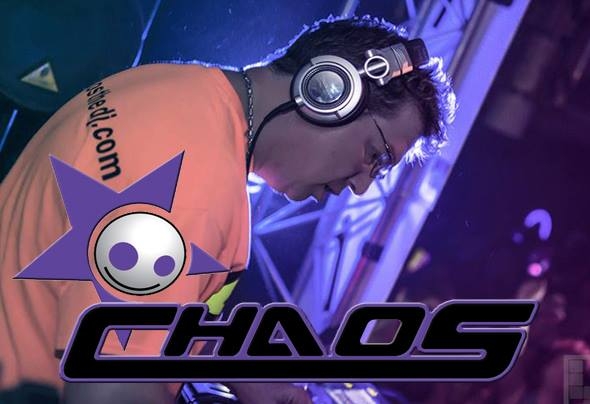 Electronic Dance Music is everywhere. From Top 40 radio to commercials to festivals, it has permeated in worldwide popular culture and in the psyche of hardcore fans and casual listeners. Not surprisingly, the increasing popularity of Electronic Dance Music has also yielded an increasing number of DJs and producers (or those who claim to be) within a relatively short period of time. However, veterans of the scene continue to create powerful and great quality tracks all the while being curators of music that has been going on for at least three decades.

As one of those veterans, Shawn Zilka (Chaos) has been involved in music since his early teens, delving first into hip hop and then into the Los Angeles rave scene. Now living in the San Francisco Bay Area, Shawn continues to keep the PLUR vibes alive through his elaborate shows in venues such as Treasure Island.

We caught up with Shawn in his studio as we talked about the latest projects and and his perspectives on the industry today.

How did you get your start as a DJ/producer?

I started DJing when I was 14 years old, starting out as a rapper and a breakdancer. At the time I was living in Waco, Texas, where I frequented a teen club. I met the DJ there who was a programmer for the local Top 40 radio station, and he thought that since I was good at rapping and dancing that I’d make a good DJ, which, being white, was a novelty. I was lucky enough to learn on turntables - cutting and scratching, and I was even a DMC regional champion. I produced a few tracks within the past decade and became serious about it the past 4 years. I started my own label and have been pumping things out like a machine lately.

What were some of the highlights of your career so far?

As a rapper I performed with Run DMC, Public Enemy, 2 Live Crew, Kid-N-Play, just to name a few, at various clubs in Los Angeles. I even went on tour with Rob Base for a while. One day I was at Ice-T’s club Water Under the Bush in downtown LA, spinning with DJ Futaka from Japan. While I was there, I met DOC MARTIN and GARY BLITZ. Gary took me to my first big LA rave, and we are talking about an old school rave in an abandoned warehouse. By midnight, it turned into a sea of up to 5,000 people, and I was brought up to spin some breaks. I didn’t know the music but I was a good enough DJ to wing it. As people were handing me tracks, I also threw in my own music, cutting and scratching on a 303 breaks. Next thing you know, I got 200 people staring at the DJ booth watching me go off. But what hit me about that night was the PLUR vibe. And that changed the direction of my career; I hung up my mic and went from spinning hip hop to rave.

Who are your musical influences?

Surprisingly enough, in hip hop, I was more into East Coast rap. And even before then, I was exposed to Electronic Music before I knew what it was. I had an uncle and he would turn me on to this weird, crazy sound in the late 70s and early 80s. Little did I know, it was Autobahn by KRAFTWERK. And depending on what genre I’m producing, my hip hop roots will surface, especially when I’m making trap, dubstep, breaks, and drum & bass. I also love the old school funksters like the Gap Band and George Clinton. You’ve been involved with the Bay Area’s electronic dance music scene. What have been some of the challenges you had?

I just moved here a little over 2 years ago. When I first got here, everyone was a bit standoffish. Then they meet me and we started to create events for the Bay Area scene. I’m all about helping people, DJs and producers alike. Right now, I have enough resources to throw smaller shows in local venues. The next challenge for me is to throw a large scale event, comparable to Pop. That’s the next step.

You’ve worked with Cloud10 Events, putting up great shows like Glow Island. Do you hope to see it expand?

The Glow Island series will remain exclusively to Treasure Island in San Francisco. It will happen 2-3 times a year, and it is one of the few times we can bring some great headliners. We will keep it going for as long as we can. Glow Island 3, which was recently announced, will be happening on May 16. I will be setting up a more intricate 3D mapping set up on the main stage, bringing some bigger name headliners, and there may be a surprise or two!

Your DJ name is known as CHAOS. How does that tie in to the music you do? Does it have any meaning?

It ties in to everything. There are two sides to every coin - yin and yang, chaos and order. In the chaos that is my life, I find and create my order. It can be really hard with so much stuff going on. Running all these different companies and productions can wear you thin, so you have to step back once in a while and then later jump back in. But more than anything, chaos also means that I love making all kinds of music, not limiting myself to any singular genre, whether it’s beautiful Trance, dirty Melbourne, nasty Electro, Dubstep hits, and Trap.

Do you have any new releases coming up soon?

Yes, just within the last six months alone I released a dozen. You can check them all out on Treehouse Tribe Records, my own personal label. I’ve also had tracks on DANK’s label Funky Element Records, Vibrance Recordings, Powerhouse SF, and Let’s Beat Milo Records. However, there are two that I am pushing. The first is “Darth Bass”, a Dubstep track that will be released on Funky Element Records. The other is a personal project of mine. The world is slowly spinning into a state of disarray. Countries are at war - some fighting for their freedom; even here at home, partisanship within our government and class warfare are tearing our country apart. With that in mind, I want to spread the LOVE worldwide with “Make Love Not War”. We have ENNOVI doing vocals and a top secret slew of big names doing remixes for the project.

If there’s anyone you would like to work and collaborate with, who would it be?

Wow, that is a tough question. I’ll try to break it down by genre. For Trance it’s the king, ARMIN VAN BUUREN. For House it’s DAVID JONES. Electro is a toss-up: DEORRO, LAZY RICH, AC SLATER, Dank, and CALVETRON, For Dubstep, it’s Calvetron, Dank, and even SKRILLEX. He has done more for bass music than anyone on the planet, and I got nothing but love or him. Also KNIFE PARTY has some nice sounds, as well as Internet Friends.

What would you like to say to all of your fans out there?

I would like to say thank you, plain and simple. I love you guys very much, and I thank you for following me, my socials, checking out my website, following my label, and tuning into my weekly webshow, Global Gruvz (Tuesday nights, 6pm to 10pm). It’s because of you guys that I’m able to do what I love to do so much, and that is to make music. I couldn’t do that with the fans, taking their time to listen and buy the music, as well as coming out to watch the performances. Thank you guys for being the fans you are.