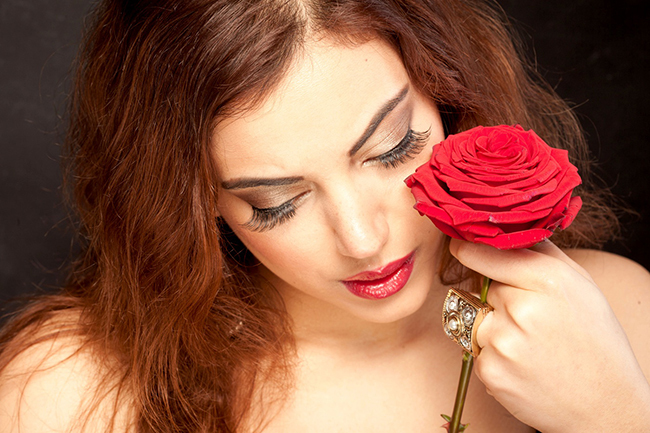 Jwaydan is a classically-trained British singer/composer/pianist based in the UK. Praised by PAUL VAN DYK's closest colleagues who noted "after being in the industry for 20 years and not once have I come across a singer who is so multi-talented, and not average at what she does, outstandingly good at all of them". She has managed to break into the world of dance music unusually fast, through both pure motivation and talent performing alongside ARMIN VAN BUUREN, TIESTO, JOHN DIGWEED and many others at Pacha, Space and La Dolce Vita. We got a chance to catch her in the studio for an in-depth interview.

How did you get into dance music?

While I was doing my degree in classical film music at The Guildhall (music conservatoire in London) electronic music was part of my studies so I learned how to do some basic production in Logic Pro. At that time I really wanted to be a producer and I would spend hours every night after college down in the studios just experimenting. My love of it continued to grow from there.

How did you get into becoming a recording artist?

Well, I started off songwriting with producers that have worked alongside: Demi Lovato, Jessie J, PIXIE LOTT, PLAN B, JOJO and more. So originally, I was just trying to get recognition in the commercial scene as an artist but then Fila (from ALY & FILA) heard some of the stuff I wrote and picked me up for a collaboration. It’s easier to start off in a smaller scene and build yourself up from there when you’re trying to break out. So I’m grateful I had that opportunity. However, I had no idea at the time that singing would become something I desperately wanted to do as a career. Who or what you say is your biggest musical influence?

My mother has educated me as a musician from a very early age. She was a renowned concert pianist so I had a very early start at the age of 5 and learned how to play a variety of instruments including the violin, flute, piano, guitar and cello. So my biggest influences are probably classical and film composers like Tchaikovsky, Stravinsky, Brahms, John Williams, Harry-Gregson Williams and Danny Elfman. I love that world of music.

Describe to us your sound and tell us a bit about your upcoming records.

It used to be quite classical and gentle in terms of my vocal style. Now it has developed into something very strong and passionate. A lot more commercial (these tracks have yet to be released) and just very wild I guess. Away from underground I wanted to start working on developing a sound that says 100% “this is who I am, all parts of me”. I'm in the process of creating a batch of songs at the moment that say much more about me as a person, my fears, my regrets, my dreams and what matters to me the most. I want to tell a story with every song, and not be afraid to show all sides of my personality. In my eyes the best artists are the most honest and fearless ones. So hopefully my current sound will express that more.

Talk to us about your latest collab "Until the End" with ANDREW RAYEL.

I wrote “Until the End” shortly after “We Control the Sunlight”. I was struggling deeply on getting recognition for my work and getting crushed and rejected constantly by everyone around me. It inspired me to write something that reminded myself and others to keep going, no matter what, whatever happens, you just have to keep fighting for what you want and not take bullsh*t from anyone. I wanted to write something that reminded people “this is your dream, not theirs. None can take that from you”. So the song means a hell of a lot to me. I want people to remember every time they hear it, what it stands for, and to keep persevering regardless of what anyone says. Also, Andrew was amazing to work with he is such a sweet, humble, funny, easy-going person and lovely to work with, very considerate, he is able to connect with people so well and sometimes DJ/Producers forget how important that is. It’s rare to find producers to work with these days that are considerate towards your musical ideas when it comes to a collaboration. He has a great future ahead.

Haha fans will kill me for saying this but what the hell…definitely DAVID GUETTA! Yep that's right people no hating! ;) I love that style—upbeat, positive, energizing, happy, the sort of songs you listen to when you just need to escape and feel a little lighter on the inside. But I relate to that sound a lot because it’s pretty similar to what I’m doing right now. What has been your most memorable gig so far this year?

Probably A State of Trance 550. Even though I sounded like a frog (due to tonsillitis) haha—so lovely for the audiences’ ears—I enjoyed it loads because the energy was incredible! You can feel when you stand on stage the intensity and the excitement and it just lifts you up. I understand why performers always say it’s the greatest feeling to see thousands of hands in the air waving to your song' because it truly truly is...it's one of those rare moments in life where you realize all the hard work you do was worth it just to get to that point where you feel so complete, so happy and so connected with the audience.

If you weren't an artist, what would you be?

A dog therapist, a garden designer, a photographer for National Geographic (I wish) anything that involves animals, being outdoors and TRAVELLING! Exploring the world, opening your mind. I just want to be a hippie, live in a tree house and forget the world some days ha (introvert).

Yes always :) I've been gone a long time, a really long time, but every day I’m gone, I'm in a studio recording a new song, working my ass off to bring something hopefully memorable into this world. So thank you for being so patient so supportive and I hope you can wait for me, I just don't want to turn out loads of collaborations or tracks like many signers do that will last a day and then disappear. I REALLY need to focus (and have been focusing) on making a collection of tracks that will, I hope, stay with you, so yes just stay with me for now and I promise it will be worth the wait!

Bonus Question: What has been your most embarrassing moment in your career?

Shouting out a club's name I was performing at except it was the wrong club name…needless to say that won't be inviting be back again :D