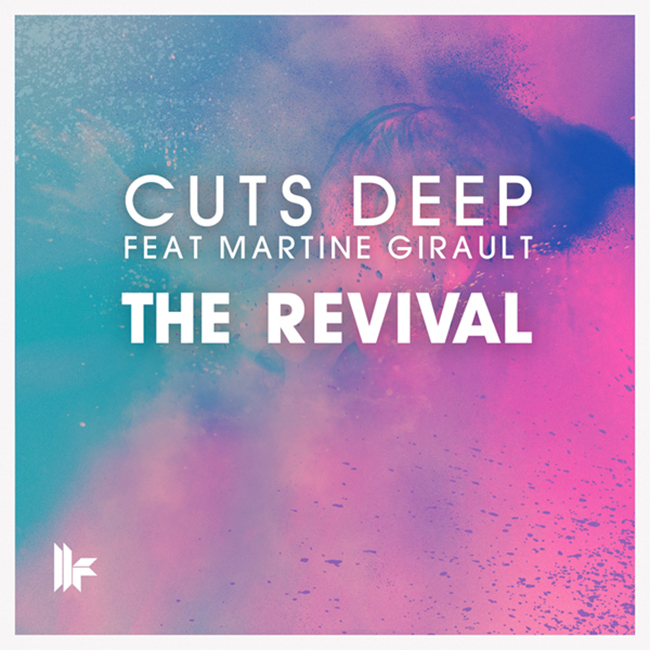 New London based production duo Cuts Deep make their debut on Toolroom with a remake of the infamous classic 'The Revival' by Martine Girault. Giving the lush vocals a fresh lease of life, Cuts Deep add rolling beats & deep basslines to reinvent this all time classic. The package also features four massive remixes from some of the industry's most exciting up and coming producers, including COPY PASTE SOUL, GIOM, DEEP CITY GROOVE and LONG & HARRIS.

Gathering DJ support from dance luminaries ANNIE MAC, T. Williams and DISCLOSURE, new breakthrough artist Copy Paste Soul delivers a delicious deep mix of the 90's remake, whilst Toolroom favorite Deep City Groove brings a tech inspired infusion to the package. Nu-disco hero Giom also makes his first appearance on Toolroom, delivering a funky re-work of the former number one, and regulars Long & Harris finish off the release with their own smooth garage inspired re-vibe. We got introduced to the new duo regarding their release of 'The Revival'.

How did you two get introduced to dance music?

Billy: At the age of 12 my friend got himself some decks and started buying and mixing early House records. I asked for a go, and was hooked from then on. Soon after that I blagged some decks for Xmas and purchased my first 12inch, a track called "Radio Babylon" by Meat Beat Manifesto. (I know, I know showing my age!).

Guy: When I first heard acid house back in the late 80’s, I actually hated it! I was a drummer and playing in bands, and it didn’t sound like music to me. Then the free party scene kicked off big time around 90/91 and my mates dragged me to a few Spiral Tribe\DIY parties way out in the countryside. I discovered the elation of dancing all night to crazy beats, and just fell in love with the music and the scene. Bought my first synths and drum machines shortly after that and put my drumsticks away for a long time!

What or who is your biggest musical influence?

Billy: I’ve only ever really been into dance music, mainly House. My biggest influences, as a producer, have got to be the likes of Frankie Knuckles ,MK ,Tuff Jam, Ben "Cozmo D" Cenac, Todd Edwards & MAW to name a few.

Guy: Dance music wise, I’d probably have to site those early free parties, being exposed to a whole new world of music. After moving up to London, I used to go regularly to the SW1 club and listen to techno served up by Colin Faver and Colin Dale. I remember going to the Drum Club and being among the crowd to hear Darren Emerson play a pre release dub plate of ‘Rez’. Those days of clubbing in the 90’s had a big musical influence on me.

What is the story behind your alias?

Billy: We want our music to be quite personal and touch people.
‘Cuts Deep’ seemed to fit that somehow. The term to ‘cut someone deep’ means to touch someone’s heart in an emotionally painful way, we want our music to do the same, but obviously in a good way!

Like Bob Marley said "One good thing about music, when it hits you, you feel no pain!"

How did you meet each other?

Billy: We met through a mutual friend back in 2006, when Guy had a studio at ‘The Fortress’ near Old Street. We co produced a few tracks together under a different name that went out as white labels and did really well. After that, I went to live in Ireland for a while, and then we came together again in 2012 to work on "The Revival" project. We just instantly gelled once more and continued the partnership.

Billy: Our musical taste is really broad, especially when it comes to House, one day we could be feeling some proper swung beats with a piercing bassline, dubby and plenty of breakdowns and drops, then the next a more rolling, building, techier vocal thing! We like to experiment, and are currently trying different sounds so don’t pigeon hole us and watch this space!

What is your choice of DAW?

How is the music scene in London?

Billy: Really good at the moment we think. House is back on the up, which is great thing. There’s always been a strong dance music scene in London and it’s spawned some great genres in the past. Although House is not new it kinda feels that way right now. Everything feels fresh and exciting ...tracks getting into the UK Top 40 and even Number 1’s is obviously helping, but without the hard working promoters putting on the regular underground club nights like Jesse James does with Connected for instance there would be no scene.....big up the club promoters!

Talk to us about your release of ‘The Revival”.

Billy: I came back from a summer in Ibiza and was itching to get back in the studio. A friend of mine said he was going to see a good friend of his do a PA, I asked him who it was and he told me, Martine Girault. I instantly knew who she was and remembered the track in particular. I asked him to put me in contact and I took her out for dinner and explained that I had idea of doing ‘Revival’ as house tune as it had never been done before.
She was well up for it, and immediately got Ray Hayden, (writer/producer of original) on the phone. Ray being the top man he is, gave me his blessing and we started working on it late 2012 finishing it early 2013. We started sending it to a few labels, and a friend of ours said she knew George at Toolroom quite well and sent it over to him. He replied and said he really liked it, could see the potential, and was interested in signing it! We were blown away that such a big House label wanted it and things moved on from there.
Toolroom then set about putting together a remix package. Featuring fantastic mixes from ‘Giom’, ‘Deep City Groove’, ‘Copy Paste Soul’ and ‘Long and Harris’ we are more than happy with how it’s all turned out

Guy: When Billy got back in touch with me shortly after his dinner with Martine and told me his plan and which track it was, I couldn’t get stuck into it quicker, in fact I did a mock up of the track the same day, initially by time stretching and chopping up the original and trying different beats. Billy then came down after that and we worked on it some more until it was ready for Martine to come down and re sing it and then we had nice clean vocals to work with.

Billy: Huge question, so many great vocalists out there that we’d give our right arms to work with! I would love to work with India (Masters at Work). Amazing voice!

Guy: I’m really digging that Wilkinson track with Becky Hill at the moment, I’d love to get her on a house tune, something a little different.

We have a 2 track EP scheduled for release in the New Year with No Agenda.

We also have a single lined up with No Agenda featuring the extremely talented ‘Georgie Soul’. a little after the EP.

We have some something special lined up for pre summer but we can’t say too much about it yet!