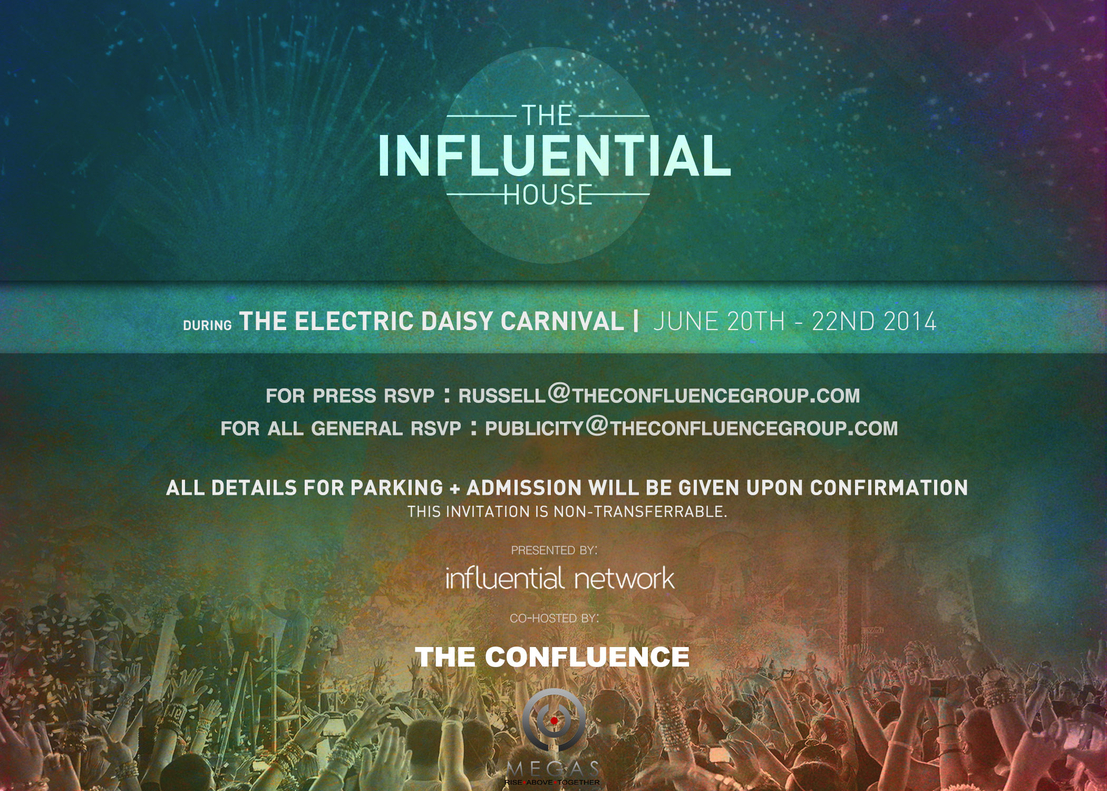 During this year's Electric Daisy Carnival in Las Vegas, The Influential Network is taking over the ICONic former Mike Tyson mansion (featured in the box-office smash hit “The Hangover”) for the biggest social media event ever as part of their Influential House Series.

The Guinness Book of World Records will be on hand to confirm that their off-site EDC party will take the crown for the largest social media gathering in history over June 20th-22nd. This event will be a first of its kind convergence of Tech + Music + Pool party like nothing that has come before it.

The Influential House launched during the first weekend of Coachella in April 2014, bringing the world’s biggest social media influencers from Twitter, Instagram, Facebook, Vine, and YouTube together for an action-packed, 3-day party with the concept of creating the most social media influence in one place, ever. The launch event garnered over 1.1 billion native impressions during the 3-day weekend, causing The Influential House’s hashtag #TINhouse to trend #1 worldwide on Twitter, over #Coachella -- during Coachella! At EDC, The Influential House intends to shatter the previous mark of 1.1 billion impressions.

This exclusive, invite-only event will host influencers, surprise celebrities guests and industry VIPs and will serve as a daytime oasis to connect, celebrate, and create social influence.

The Influential House pool party will feature top DJs like THE STAFFORD BROTHERS, E-ROCK, ICON, KARMA and electronic crossover artist MAKI HSIEH. Not to mention,additional production and art curation by Dancetronauts. Sponsors Monster Products, Cyberdust, SelfieMe, PreFunc, Breakr, JusCollege and ShirtWasCash will do brand activations and gift product to attending influencers. Media partner, Entertainment Tonight will be returning to cover The Influential House for the 2nd time. Additionally, FanPass.TV will live stream directly from the event and Equiinet will provide connectivity. LA Bloom is co-producing the event and brought many of the entities together. Additionally, the LA based P.R. firm The Confluence will also be co-hosting the event.

“We are so excited about our second Influential House event; Our launch event during Coachella exceeded our expectations and created a new format of events to celebrate the newest form of celebrity, the social media influencer. We look forward to breaking our previous mark of 1.1 billion impressions, all while providing the influencers with a weekend that they will surely never forget.” - Ryan Detert, CEO of The Influential Network.

If their Coachella pool party is any indication of the mayhem about to ensue, this is one party not to be missed!