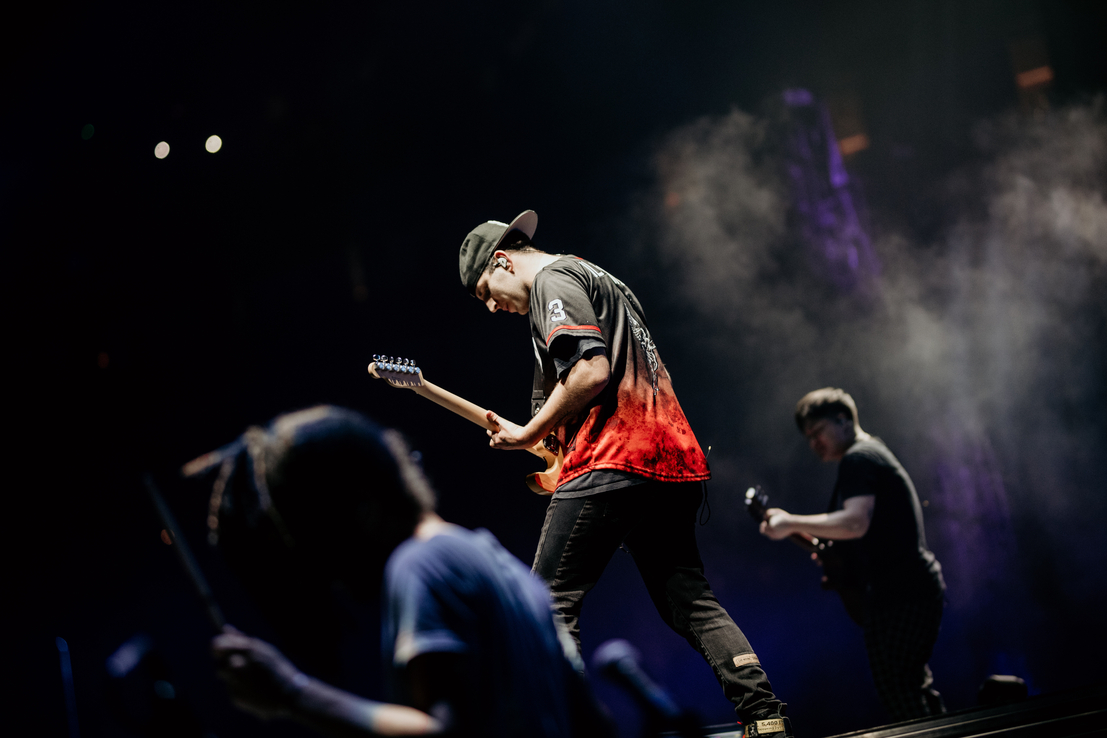 Two years ago, Nick Miller – best known as ILLENIUM – came to The Warfield Theater in San Francisco. As a Denver-native I was already a huge fan and this was the first time I’d seen him live. Singing along to tracks off his ‘Ashes’ album, I could never imagine how much would change in two years. Two albums and endless headlined festivals later, Miller’s meteoric rise would bring him from the Warfield, to a sold out show at the Chase Center and two throwback sets at Bill Graham Civic Auditorium as end caps for the weekend.

On Friday, December 13 I donned my jersey and headed to Bill Graham for the first throwback set. Miller stood alone on stage, often cast as a silhouette against a backdrop of ethereal visuals. The set opened with a dynamic medley of his older hits that flowed into "Afterlife" and his remix of "Operate". The crowd cheered when he played PORTER ROBINSON’s “Sad Machine” before switching things up, bringing the tempo down with Coldplay’s “Fix You” and back up with SEVEN LIONS’ “Worlds Apart.” Both bassheads and fans of his emotional, melodic music were satisfied as he transitioned seamlessly between sections of each. One moment we were singing wholeheartedly to his remix of KASKADE’s “Disarm You” (this one always hits so hard), and the next we were headbanging to SKRILLEX’s Scary Monsters and Nice Sprites. We were even treated to deeper cuts from his discography like collab with SAID THE SKY "Drop Our Hearts, Pt. 2" and mashups like Post Malone’s “I Fall Apart” over a personal favorite "Leaving," and Panic at the Disco’s “I Write Sins Not Tragedies” over Porter’s “Divinity.” Miller closed with a new track with EXCISION called “I Prevail.” My favorite moments were hearing "Spirals", JUST A GENT’s remix of "Fortress", and "Reverie". We were taken on a ride though Miller’s first two albums and it amplified all of the reasons why I became a fan in the first place. His incredible talent transcends the music in a way that clearly speaks to so many people. With one night done, I couldn’t wait for the next two. The brand new Chase Center would welcome us the next night not only for an Ascend set, but for the very last of the tour. Joining him on stage were DABIN, Said the Sky, Day Gatsby, and Annika Wells providing their talents on guitar, piano, drums and vocals, respectively. In typical Illenium fashion, he opened with a beautiful medley of songs, this time off the ‘Ascend’ album, which then started the show off with a bang by going into his track “Blood.” Annika Wells then came out to sing "Crawl Outta Love" before a sequence of tracks off ‘Ascend.’ I loved hearing "Hold On," a stripped down take on "Crashing," and "Broken Ones." Unlike the throwback set, there was less oscillation between melodic and harder bass music, however there were plenty moments of both and Miller still incorporated older songs in this set list including "Fractures", his remix of Flume’s "Say It," and "Beautiful Creatures," making sure not to repeat songs that had been included in the throwback. The show concluded with the entire live ensemble on stage and four of my favorite tracks from the album starting with the beautifully moving combo of "Angel" and "Lonely." This lead into "Sad Songs" with Annika Wells coming back on stage to sing on her collab with both Miller and Said the Sky. Last came audience favorite "Good Things Fall Apart." There wasn’t a single person not singing along as confetti rained down.

I got chills at so many points during the show. The combination of music, production and live elements is always awe inspiring. It’s also always amazing to see such a talented group of friends come together and put on something as massive as this tour. I couldn’t believe how many people were in the crowd and how tangible the energy was. It was an incredibly magical night. I returned the third and final night to Bill Graham for one last throwback set. I was lucky enough to watch the show from the sound booth where WILLIAM BLACK, Said the Sky, Dabin and Miller’s family and friends also were. Singing to all of the tracks, especially "Rush Over Me" and “Good Things Fall Apart” with everyone, and getting to experience the show all over again was invaluable. There was definitely a sense of bittersweetness with these being the last set of shows on the Ascend Tour. There was relief but also sadness as this would likely be the last time Miller would tour with his band of friends. Anyone who was lucky enough to witness any of the shows knows how truly special they were and the success could come to no one more deserving.