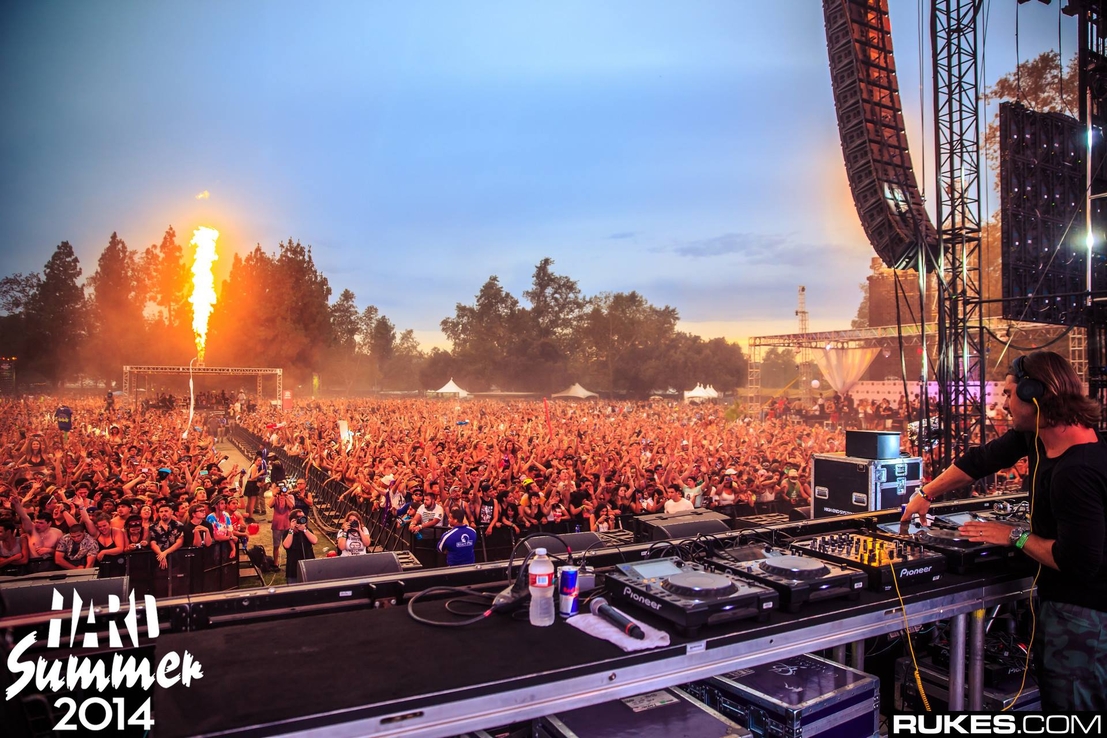 Last weekend, we were among the eighty thousand people who went hard at Hard Summer. "Hard" may even be an understatement. Since the event had been sold-out for weeks, we expected a bit of madness. Ticketless festival-goers stormed the gates in failed efforts to gain admission; one even stole the shirt off of a worker's back. As you can guess, the former's attempt to "discretely" disguise himself backfired, and the less-discrete runners suffered a similar fate. If you were one of the unlucky souls who was unable to secure a ticket, failed at tricking security, or just could not make it out to Southern California last weekend, do not fret. We have the top moments that you did (and did not...) miss at Hard Summer 2014 right here.

The new venue was hotter and had more dust than the Sahara desert. One of the biggest lessons we learned was to never attend an outdoors festival without an emergency bandana on hand. Whittier Narrows Recreation Area was also gigantic. The five stages were so far apart that you either had to a) be really ambitious to roam around the entire venue, or b) redo your entire personal schedule so that you could stay in one half of the venue area only. The HARD and HARDer stages hosted big names, while the pink, purple, and green tents welcomed niche, underground artists (who are the real headliners, in our opinion). The stages were not elaborate, but they did the trick. As much as we love the magical production of other massive festivals like EDC LV and Tomorrowland, it is easy to get lost in the glitz and glimmer of it all. HARD, on the other hand, prides itself on the amazing talent it brings. The venue may not have been glamorous, but the music sure was. Because of this, Hard Summer attracted a diverse crowd to say the least. Ravers, trap lords, hoody girlz, frat stars, festival newbs, EDM veterans, and even some goths found peace and harmony together at Whittier Narrows. Halfway through his set, Baauer disappeared from the HARDer Stage, and finished his set on top of a 50 foot tower behind the crowd. This move defied the "you snooze, you lose" notion at most events where you miss out if you are not at the front of the crowd early. Nero, providing one of the best sets of the weekend, brought out Alana Watson. There was nothing quite like listening to Alana's beautiful high pitched, siren-like voice over filthy, grimy dubstep wobbles. DILLON FRANCIS also had Taco from Odd Future as his MC. DISCLOSURE came out full throttle with a full stage setup of drums and keyboards. As if seeing Disclosure perform songs from their album "Settle" live was not amazing enough, the two brothers also brought out Mary J. Blige & Eliza Doolitle to perform with them on stage. These two guests were not the only ones singing, however, as the duo also added in vocals throughout the set. There was a British invasion on Sunday at Hard Summer, as Disclosure was not the only group to perform with live instruments. RUDIMENTAL also had a full stage setup that did not disappoint. Our favorite part was when the quartet performed some old-school British jungle music, which is an extremely rare treat for us Americans. Hard Summer is also one of the few EDM-dominated events--or dare we say it, "raves"--that still offers live instrumentation and band performances. A-TRAK also revolutionized the concept of "live performance" when he brought out his turntables and presented a phenomenal scratching routine. Dillon Francis teamed up with V Squared Labs to debut his new stage show inspired by Frank Gehry's Walt Disney Concert Hall. Each of Dillon's sets is unprecedented with an entirely new vibe, and his performance at Hard Summer was no exception. He went back and forth between his past and present self, throwing down his original moombahton tracks and giving shout-outs to the genre, while mixing in I.D.G.A.F.O.S. and returning back to trap. He also debuted his new single with MARTIN GARRIX, who joined him on stage before his own set at the HARDer Stage. Last but not least, he had the most ridiculous, but wonderful visual show that included Fabio, I Can't Believe It's Not Butter! containers, dogs eating hot dogs, and, you guessed it, cats. Carnage had an extreme diva moment, screaming "f*ck hard, f*ck Gary Richards" when the sound cut off for 10 seconds during his set. We cannot say we were not too surprised by this small outburst. As angelic as Diamanté can be, he is also outspoken and clearly gives zero f*cks (unless it comes to Chipotle). Despite A$AP's impressive performance, it was a bit obvious that the crowd was not feeling it. A$AP Mob called the crowd out for not being turnt up enough. They outright asked if it was because people were not high or drunk to show them some love. At any other hip hop festival, the same exact performance would have had attendees on the ground bowing down. Simply put, A$AP is not used to rapping in front of a bunch of ravers. This same phenomenon occurred during PUSHA T's performance; it drew such a small crowd that we were able to walk right to the front of the stage without a scratch. Wiwek's "Salute" (surprisingly) & Duck Sauce's NRG (unsurprisingly) were played dozens of times throughout the weekend. Popular hip hop tracks were integrated into each Main Stage set; A-trak, JACK U, FLOSSTRADAMUS, and Dillon Francis were masters at this, to name a few. We swore that Kanye or Drake was going to pop up on stage at certain moments. Also, DJ SNAKE & Aazar's remix of "Dirty Vibe" will forever go down as the Hard Summer 2014 anthem. I think Hard attendees can agree that Jack U had the best, or maybe second best set of the weekend. Their opening introduction comically combined BREACH's "Jack" with Soulja Boy's "Crank That." This sort of contradiction was apparent during the rest of their set too, as the duo mixed tracks with polar opposite BPMs. Skrillex and Diplo would slow down the set with instrumental vocals, only to blow listeners away with massive dubstep, trap, and electro house drops. Even if it was raining, they set the stage on fire (literally). In addition to Jack U, fifteen minutes of GORGON CITY's set uplifted us to cloud nine. Also, after checking out Snails we have no doubt that he will be a big bass contender by the end of the year leading into 2015.