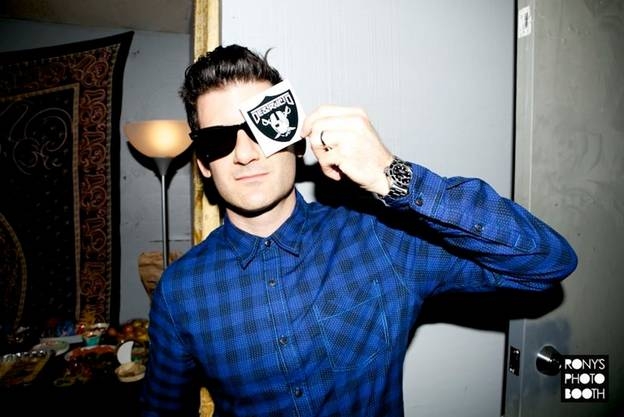 Go HARD or Go Home: Gary Richards and the Evolution of His EDM Empire

As an innovator and pioneer of the dance music scene in Los Angeles, Gary Richards has forged an empire of sound out of a simple mind state: just play good music. Internationally recognized as Destructo and the head honcho behind HARD, Richards had humble beginnings as a club promoter and warehouse DJ  in perpetual search of the perfect party location.  His first two ventures  - Magical Mickey's Holy Water Adventure in '91 and Ravemerica in '92- were held at Wild Rivers Water Park and Knott's Berry Farm and spoke volumes to his creative capabilities; not to mention, they're something his current fanbase would most certainly welcome back with open arms. 'The Sermon', his first real parties series, was perfectly timed to open at 6am and boasted Richards on the decks as DESTRUCTO donning a priests costume as an extended family of friends rallied around as the sun came up.  As a local Angelino with almost 15 years in the industry, he proceed to throw parties at literally every venue in town - from the Roxy to the Viper Room, The Standard to the Fonda (formerly the Music Box) and The Shrine to his personal favorite The Palladium. In 2011, he was sought out by Trent Reznor to promote the American release of 'Girl With The Dragon Tattoo' at his Mouth Taped Shut Parties and he's even forayed into the silverscreen as the Music Supervisor for the 2001 flick 15 minutes; though it's not likely he'll be back again.

"I just do what I like to do, I dont do test stuff with audiences; I just kinda go 'Hey, let's do this!' The thing with Trent was way different, he personally asked me to help promote the parties - but movies, I'm good with what I'm doing right now"

As I sit, quietly grinning on my cell phone, a gregarious Richards sits on the other end; and as he delves into the details on his new Album, it's easy for me to forget that the musical tastemaker and global jet-setter had literally just walked in the door from LAX. For the last few days, he's been in Europe as part of The West Coast EP World Tour in promotion of his latest album dropping later this year. For the past few months, he's been deep in the studio curating his signature G-House sound for 'The West Coast' EP - his third. Plus, his latest single 'Party Up' featuring YG, one of the first releases on Insomniac's new label.

"As a DJ I always try to find something new - that's the point of being a DJ, playing something new. I heard some stuff incorporating hip-hop into house and wanted to do a whole set, but there just wasn't enough material.  So I went into the studio with intentions and sampled some stuff from Dr. Dre.," explains Richards, "I thought 'It's cool - but I thought it'd probably just be better to get a real rapper instead of sampling.'  I hooked up with YG before and it worked out real well, and he introduced me to other artists - and not only are the songs cool, but it's fun.  What I do, it's computer, programming, synthesizers - so to have someone come in as professional lyricist, or someone to who really sing and put it over all that - it's like discovering a new planet; it adds so much more to the music, it's exciting. "

Though we can't tell you who else he's collaborating with, we can  tell you that he's excited. For an artist who draws inspiration from personal favorites like Depeche Mode, Nine Inch Nails, NWA and Dr.Dre - this album is set to be a Pandora's box full of eclectic earcandy and creative collaborations. From promoter to producer, father and husband, artist to audience - Richards is more or less a modern day Renaissance man. Hand picked by Rick Rubin to handle A&R for the Electronic Music division Def American Recordings, Richards was responsible for bringing in the electronic rock sound of Prodigy, Lords of Acid and XL Recordings.  As he catapulted throughout the industry, Richards forayed back to DJing and Producing when he realized that what people were really craving was the live experience.

On New Years Eve '07,  Richards threw what would turn out to be the party of a lifetime with at a private warehouse in downtown Los Angeles. And Within just 7 years, the HARD  franchise has catapulted from a one night stand into an international empire with events spanning from North America and into England and Australia, curated stages at festivals like ULTRA and EDC,  and last but certainly not least, the cruise everyone craves: Holy Ship! Since it's inception, the HARD brand has forever been at the crux of music festivals - offering up something a little darker and outside the norm of a more 'mainstream' event, and has  become synonymous with exceptional live performances from some of the most talented, multifaceted artists across the board.  Though they might differ in terms of styles and traditional 'genres' - they all do have one thing in common: they play good music.  Through the pursuit of exceptional artists and his annual US tours, Destructo has catapulted the careers of artists, peers and friends like BOYS NOIZE, WOLFGANG GARTNER, RUSKO, CRYSTAL CASTLES, THE BLOODY BEETROOTS and is responsible for bringing the awe-inspiring South African group DIE ANTWOORD to Los Angeles.

"I just like good music.  It's just about dancing and having a good time - but I always try to pepper something in with an edge."  Take one gander at his lineups over the last seven years and you'll find yourself wondering whether you've stumbled into an EDM Festival or a Rock Show - but according to Richards, that's the point.  "HARD is like a salad - artists like BOOTSY COLLINS, GIORGIO MORODER, MIIKE SNOW: they keep it fresh."

Every brand has growing pains as they reach their pinnacle, and HARD is no different; take the most recent HARD Hollywood Bowl date featuring the legendary NILE ROGERS and CHIC, with Giorgio for example. "Sometimes when you try new things, they don't always work - I got ahead of myself," lamented Richards, "We will definitely be having them for a show because they deserve the notoriety."  The main difference between some brands and this brand - perseverance. Minor setbacks aside, HARD has blossomed into a household musical name, hosting shows from LA to Miami and New York City to Colorado.

Next Thursday,  HARD's ruckus returns to Red Rocks with KNIFE PARTY, DILLON FRANCIS, SAMO SOUND BOY and JULIO BASHMORE. With such an iconic venue to look forward to and a sensational lineup alongside him, Richards couldn't be more excited.

"Red Rocks - favorite venues anywhere period.  I remember the U2 album 'Blood Red Sky'  from when I was a little kid.  It was recorded there live. They sold out that place, and to now sell out that place with house music; I'm humbled.  And the people of Colorado are fucking awesome - they know their music!"

The day after Red Rocks, he'll rush back to Los Angeles for the Sold Out 7th anniversary of HARD Summer. With LA's Historic Park under construction - the event has migrated to the Whitter Recreation area, about an hour away from the heart of Los Angeles.  From Beyond location, fans should note some fantastic changes coming their way:

"It's a much larger park so we have more room...and we have grass! We added a fifth stage - so just expanding and making it into a more proper festival."

Representing each and every genre, HARD's lineup boasts a menagerie of musicians - the HARD and HARDER stage featuring the 'biggest acts' and the Green, Pink and Purple tents speaking to specific sounds, according to Richards - he's basically DJing the DJs.   On Saturday, the Pink Stage hosts the Dirtybird Crew with WORTHY, J.PHLIP and JUSTIN MARTIN. Sunday on the Green Stage will be a G House showcase as Destructo joins Tech House phenoms BRODINSKI, SHARAM JEY, SHIBA SAN, KILL FRENZY, DJ MUSTARD and favorites HANNAH WANTS, BONES, VANILLA ACE alongside production partner WAX MOTIF.  "We all go together like butter; it's 10 artists vibing out to the same beat."

If we're going to talk about every genre, we have to mention the Trance elephant in the room - TIESTO.  Though Richards admits he'd never host a whole stage, if there's one or two guys in the Trance scene that are habitually turning it out (we're looking at you, Anjunabeats) - they'll be there.

Originally introduced through ZEDD to, Tiesto was in talks to come to Holy Ship 2013. Though that fell through, his agent reached out to Richards again this year and after paying his own way to the cruise - Tiesto got to pull surprise of a lifetime as Zedd introduced him as the guest act of the weekend.  And after playing a late night back to back deep house set in the disco of Holy Ship!, Richards was taken back by Tiesto's skill and sold on his abilities to bring something new and different to HARD,.

"It seems like the perfect thing.  People are excited to see him, and I'm stoked because he gets to play what he wants.  He's an awesome fucking DJ. It's weird when you say the word trance because what I think of trance and what you think on trance is different. When I started DJing, Trance was synthesizer, arpeggiated, super deep long, electronic, synth-ed out really cool shit - and somehow it turned into vocal pop music. What happens a lot with these guys is they have to live up to their name, they have to live up to what fans think of them. But they want to do different stuff too, they don't always want to do the same thing."

Between developing the HARD brand and his perpetual push to fill the world with good music, Richards has built more than an empire of music -in a true reflection of our cultural melting pot, he's assembled a brazen community of international music lovers, simply begging the world for more good music.  Catch Richards as Destructo next Thursday at Red Rocks, then Sunday 8/1 at HARD Summer on the Green Stage.

HARD Summer FOMO? We've got you covered - get in on HARD Day of the Dead Pre-Sales Here