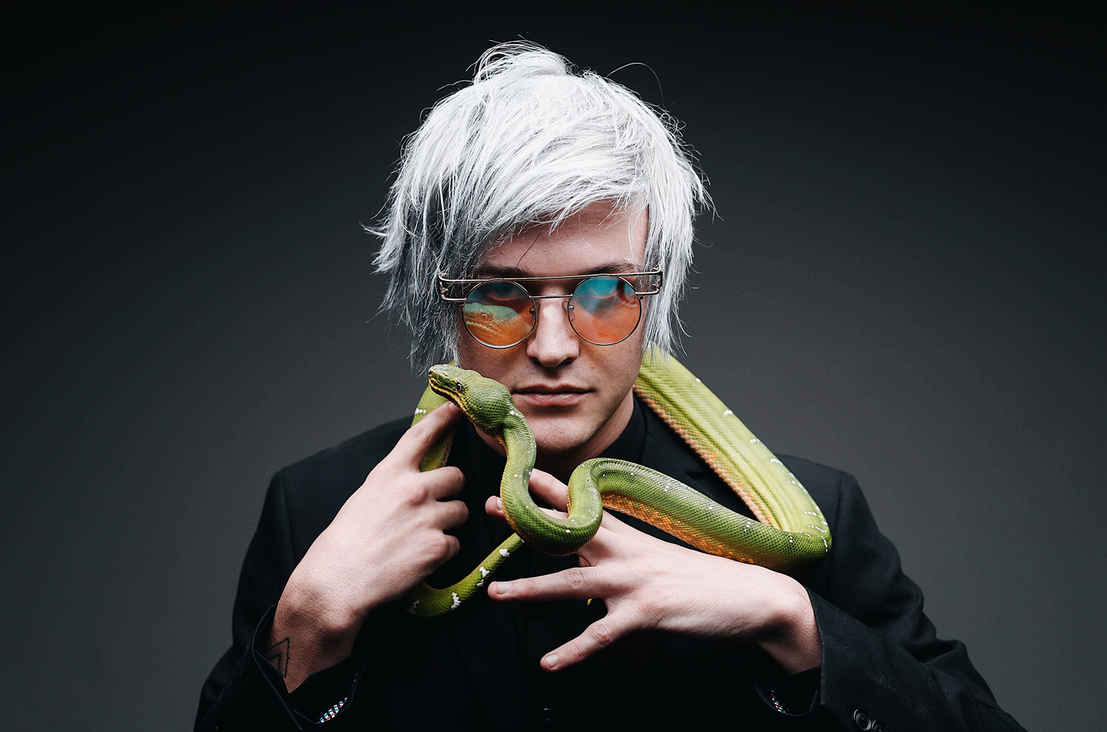 Ghastly on his beginnings, his sound and hints on new 2018 tour

Not much is known about GHASTLY apart from his real name of David Lee Crow. The innovative producer and DJ continues to push the musical boundaries of house, bass, dubstep, trap and everything in between. Invoking the attention of Skrillex, Borgore and others, Ghastly has since made a profound standing and name for himself in the electronic music space. With a slew of solid releases on OWSLA, Buygore, Dim Mak and more, there is no stopping Ghastly with this infectious records. We got a chance to meet him after his sold out performance at Bill Graham Civic Auditorium in San Francisco about his latest remix and single “I’ll Wait”.

How did you get started with music in the first place?

I think it really stemmed from just my original passion from youth, but for me I knew it was something I really loved when my brother showed me all the music that our parents didn't want me to hear like Metallica, Death, Cannibal Corpse, etc. I came from a really wholesome and religious family...they did not f*ck with that kind of sh*t. When I saw all of the Metallica and Megadeath albums broken into pieces in the garbage, I was like wow if music can make people feel that passionately where they have to destroy it because of its message, that's when I was even more interested. So in their attempt in trying to remove it, they instilled it.

Who or what would you say is your biggest inspiration?

I'd have to give that to life in general. Just the experiences, the people we meet, the orchestrated chaos we call being alive is always inspired me more than any artist could. If I had to name a few I would say Andy Warhol, Aphex Twin, The Beatles...multiple legends beyond the platform of just dance music.

It's whatever I'm feeling on the inside. If I'm feeling a certain way I do my best to convey it in audio. I mean a lot of people would call it more house music because I've always loved house music but with tidbits of different things like heavy bass music to something beautiful and melodic. It's whatever I'm feeling man. Trying to find the chemical makeup between all these different styles and making them still fit together without being too contrasted.

What’s the story behind your name?

I think it originated from the word out of the dictionary, which is a ghostly, terrifying figure, etc. I always like that word. I like how there's an 'h' because it's silent. That was such a weird word for me and I loved it. A lot of people think it comes from Pokemon. I'm not going to lie, I thought about Pokemon when I was coming up with it...but I didn't think anyone would actually think that. Now I get Pokemon candy every other night you know.

Talk to us about your latest remix “Loving Every Minute” by LATROIT & BISHOP.

You know what's funny that actually wasn't my latest remix. I don't know what happened, labels are weird. It just popped up on Spotify like two weeks ago. It said it was new but I actually did that remix in 2015 I think. I loved that one. I did it with my good friend Latroit who was also my musical mentor. He was the first person who really gave the opportunity to shed some light on this path to making it a reality. He introduced me to Sullivan King, Jauz, Buygore crew, etc. I am eternally grateful for that.

Talk to us about your latest single “I’ll Wait”. What made you write this?

I kind of share this mentality with deadmau5. I don't necessarily sit down and say like alright this is what I'm going to make. I just kind of f*ck around with something until it feels like and I connect with it. That's how I know it's authentic. I was listening to a lot of Mat Zo and Porter Robinson at the time and they helped influenced that track. I'm thankful for that. We're all out here inspiring each other just like all other humans. That's how we create new things and develop new cultures, etc.

What was your favorite moment on Holy Ship!?

It was a blast man. It's really difficult to say like you know what's the best part like this one 5 second thing that happened. The whole thing was just a blur and every night that I would lay down my cheeks would hurt from just laughing at every thing that was so funny and so fun. I think my favorite part of Holy Ship! was the culture that surrounds it and the actual #ShipFam feel. It's not just a hashtag when you're on the ship. You're out in the middle of the Atlantic Ocean with all these people you never met and they treat you like you've been their friend for years.

Are you excited for EDC Mexico 2018 next week?

Oh sh*t that's next week. Hell yeah I'm excited! Very excited for that. Mexico is the first country outside of America that I ever went to. I always thought how beautiful it is out there and I love the people, the food, the culture. In spite of their hardships, they've proven to have such a beautiful side to everything that they are.

Is there any other festivals can we expect you to perform at?

I'm doing EDC in China, there Ultra Music Festival, Lollapalooza in Paris, and a couple more. What I've been really gearing up for is a new tour concept that I've been keeping under wraps. We're going to announce all that in March. It's a brand new everything. Production is completely fresh and I'm bringing so many new things to the table, I'm really excited about it. It's been so difficult to keep under wraps. I'd sit down and draft up the tweet about what I'm about to say.

What is one thing you're currently obsessed with?

Just one? F*ck. I have multiple obsession syndrome. I have an obsession with horror, anime, staying up until 4:00 AM, and people. I think people are really f*cking cool.