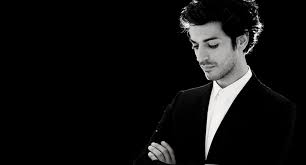 Gesaffelstein On Tour b2b Nights at Shrine Auditorium in LA

Following his comeback performance at Coachella 2019 and several other major festivals this summer, the Dark Prince is currently underway on his biggest headlining tour, featuring his new live set and stage production. After playing a Thursday night show at Bill Graham Civic Auditorium in San Francisco he returned to Los Angeles for two sold-out nights at the Shrine.

The French producer and DJ brought his highly-raved about stage production that was first debuted at Coachella this year. It featured the very scare, very expensive material known as Vantablack, the world’s blackest material that hides any visible features to the human eye and can be quite disorienting. The material hides 99.96% of all visible light, leading to very confusing effects on the mind. It was contrasted by the reflective black outfit he wore, covering all parts of his body, even his face, and hair. It was reminiscent of a metal Mario. The 30-ft high monolith splits in two to reveal dual video screens and a wall of lights. The prince of darkness entered and exited his set by passing through the doors that made It appear as if he was coming out of a pitch-black void. The crowd roared to the sound of each song, featuring many VIPs of already released songs and the debut of some new ones off his recently released NOVO SONIC SYSTEM EP. His return this year marked the end of a 3-year hiatus, but that break resulted in the production of music for other artists like The Weeknd and Pharrell. This year’s return and consequent tour mark his return to the dance scene, hopefully for many more years to come.

More information and tickets can be found on GESAFFELSTEIN’s Facebook page.