How The FriendShip Stole My Heart in 2020

As I sit here reflecting on FriendShip 2020 from my couch, it’s hard to believe that just a week ago, I was afloat Royal Caribbean’s Navigator of the Seas with some of the best people and DJs on the planet. This year was my fourth ‘Ship’– following two sailings on ‘Holy Ship!’ (9.0 and 10.0) and last year’s first ‘The FriendShip’ (although both of the cruises share the same founder, Gary Richards AKA ‘Destructo’, and though many consider The FriendShip to be Holy Ship’s spiritual successor now, they are otherwise unrelated.) 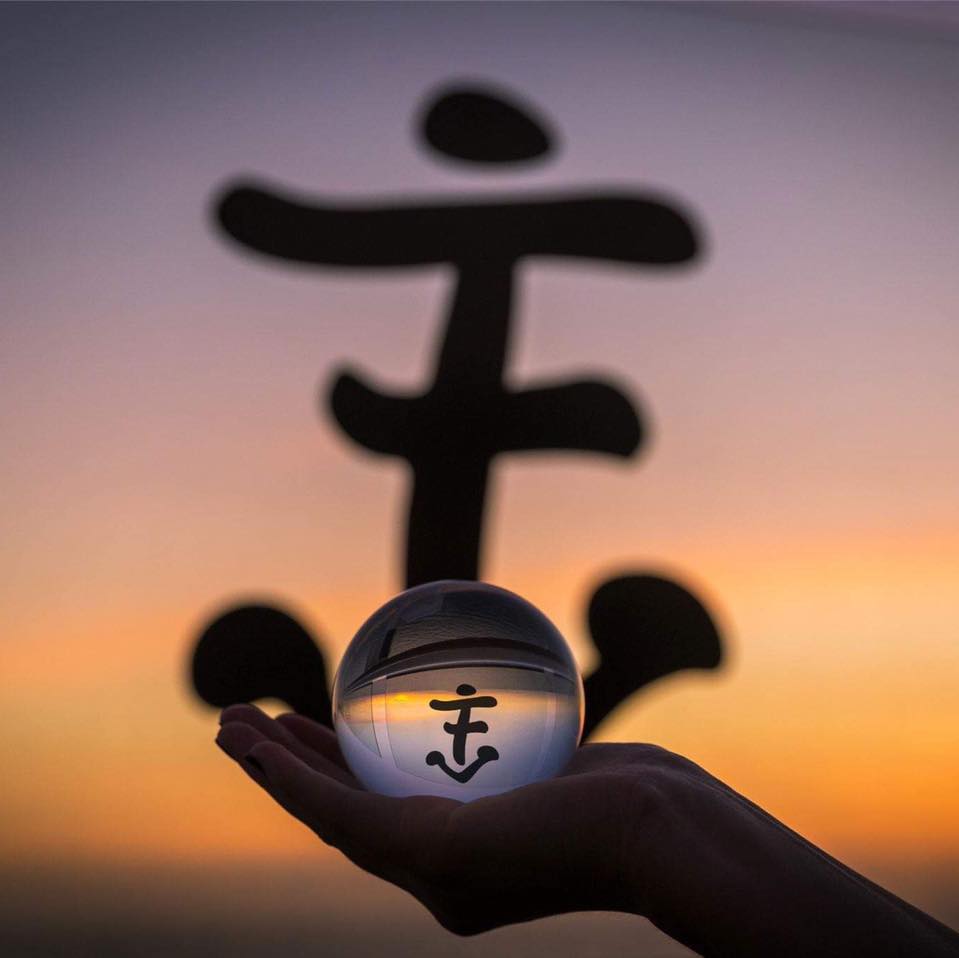 Each year, I find myself more and more infatuated with the idea that so many incredible souls gather to spend time together in such a unique environment. The FriendShip is a perfect blend of luxury accommodation and high-caliber entertainment, and this year’s iteration absolutely topped every one of my past experiences. 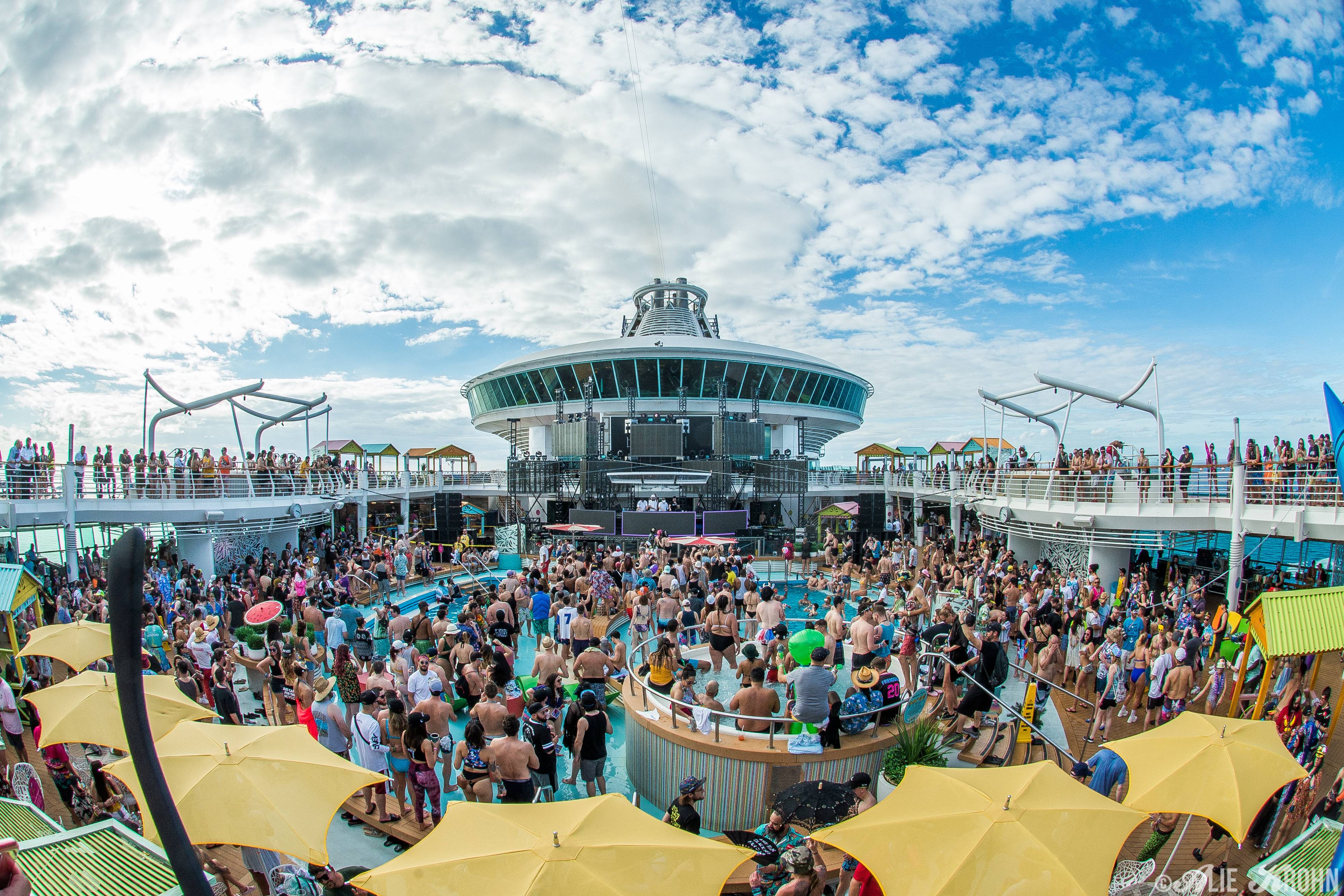 On my first ‘Ship’, as a ‘virgin’ (a term of endearment originating on Holy Ship! and assigned to those who have never shipped before) my mind swam with a great deal of uncertainty. Though I had my then-boyfriend and a few friends coming with me, I did not know that a majority of the attendees who already sailed together many years prior had formed a tight-knit community lovingly referred to as ‘ShipFam’. I had previously attended a handful of festivals, and electronic festival life was certainly nothing new to me, but no event could have prepared me for what I would experience on that ship and all of the ships to follow. Everyone welcomed us with open arms and by the end of the week it felt like we had known them for our whole lives. We instantly felt comfortable, immersed, and accepted. That feeling kept us coming back to book another cabin on another ship. Last year the same man I shipped with on 9.0 proposed to me on the inaugural FriendShip sailing and now, three more sailings after that first ship, my husband, almost all of my close friends and the people that I interact with daily, and I are ‘FriendShipFam’.

FriendShip to me is no longer just a festival vacation, but a reunion of friends and family from far and wide and also an opportunity to meet and connect with even more kindred souls that otherwise I’d maybe have missed out on knowing. So many festivals I have been to in the past are more or less about just seeing DJs with your friend group, whereas FriendShip is about enjoying the company of friends new and old with a soundtrack of incredible talent everywhere you go. Everyone is so eager to integrate and effortlessly flow between the seas of friends that being new no longer feels so harrowing. 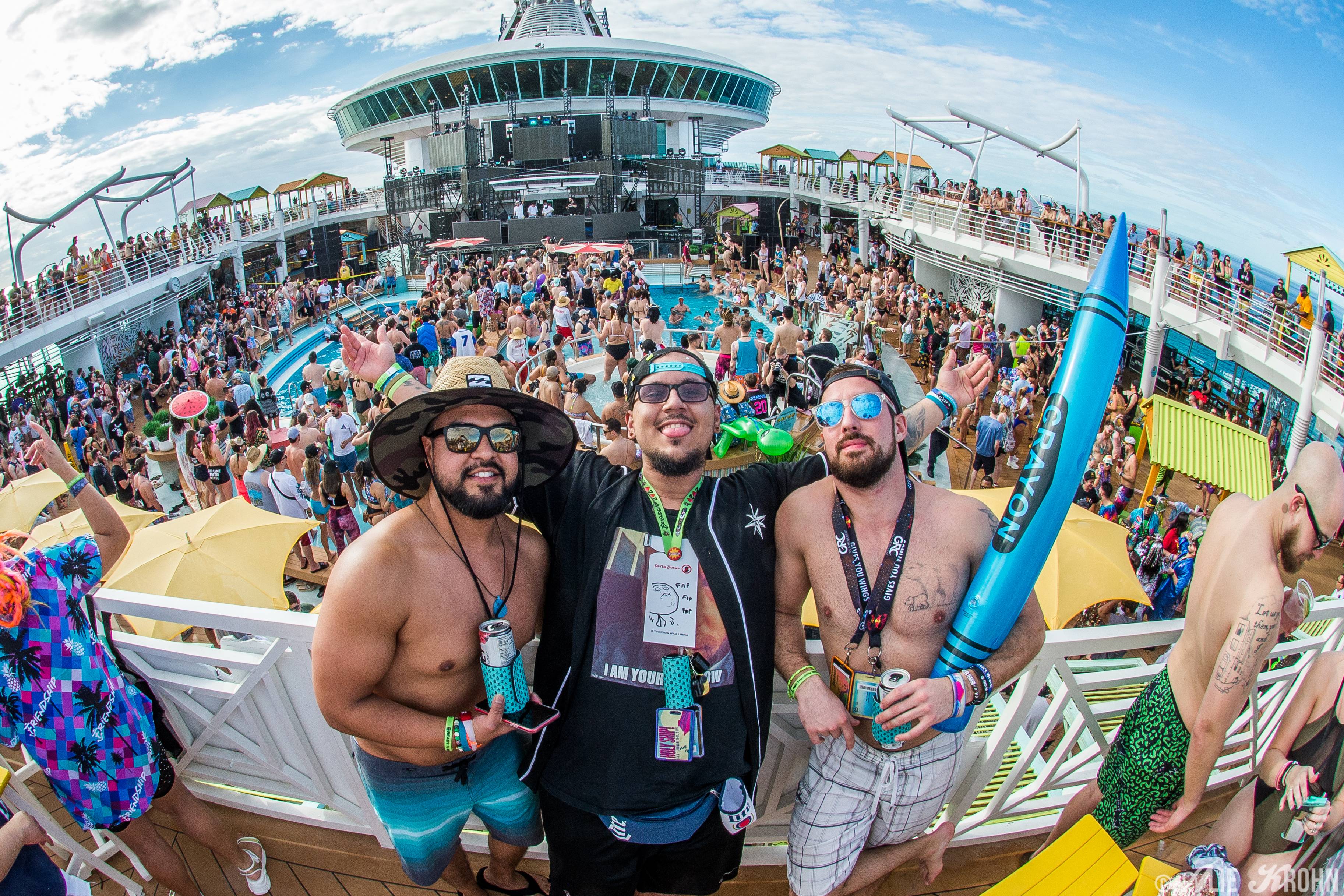 This year, we arrived at the port early and immediately saw a large slew of people that we knew. We exchanged hugs and eagerly awaited entrance to the ship, slapping “READY TO SHIP” stickers on everyone and everything as per tradition. We were lucky to be boarding through one of Royal Caribbean’s newest ports, which meant everything was quick and spirits were high. The staff in the port were just as happy to see us as we were them! Each year, they tell us how much fun they have hosting FriendShip. Before we knew it, we were boarding! We were met with a champagne toast just steps onto the ship, and I had my FriendShip 2020 luggage tag in hand. Rooms take a little longer to be readied, so as per tradition we hopped in the elevator up to the buffet to grab a bite before festivities began. The FriendShip had themed drinks this year, aptly titled “Griz and Juice”, “AMF”, “Gary Water”, and “Elax”, a nod to some of the notable presences on board.


We opted to book a Junior Suite on the 9th floor, close to the elevators. The suites have a bit more room, a closet, and a full-size shower, which helps maximize the space when shared between four people. Before we could get so much as unpacked and changed into our outfits for the always not-to-be-missed sail away set, we had friends stopping by for a hug and a champagne toast, and then it was time to dance! TroyBoi, DESTRUCTO, and CHRIS LORENZO brought serious heat to the Pool Deck to kick things off. The ship had a Johnny Rockets restaurant on the pool deck, and in one of those classic “this only ever happens on ship” moments I enjoyed some Johnny Rockets chicken tenders and fries while I danced away the sunset.


One of my favorite additions to my experience was the purchase of the Unlimited Dining Package, which allowed me to eat at the specialty restaurants on the Ship for one fee. In addition to Johnny Rockets, I ate at Jaime’s Italian, Playmakers Sports Bar, and Chops Grille, all of which had fantastic food and service. The Ship does have a buffet and restaurant included, but I felt that the food at the specialty restaurants took Ship to an entirely new level. I ate well every day and fueled my body for all the dancing. 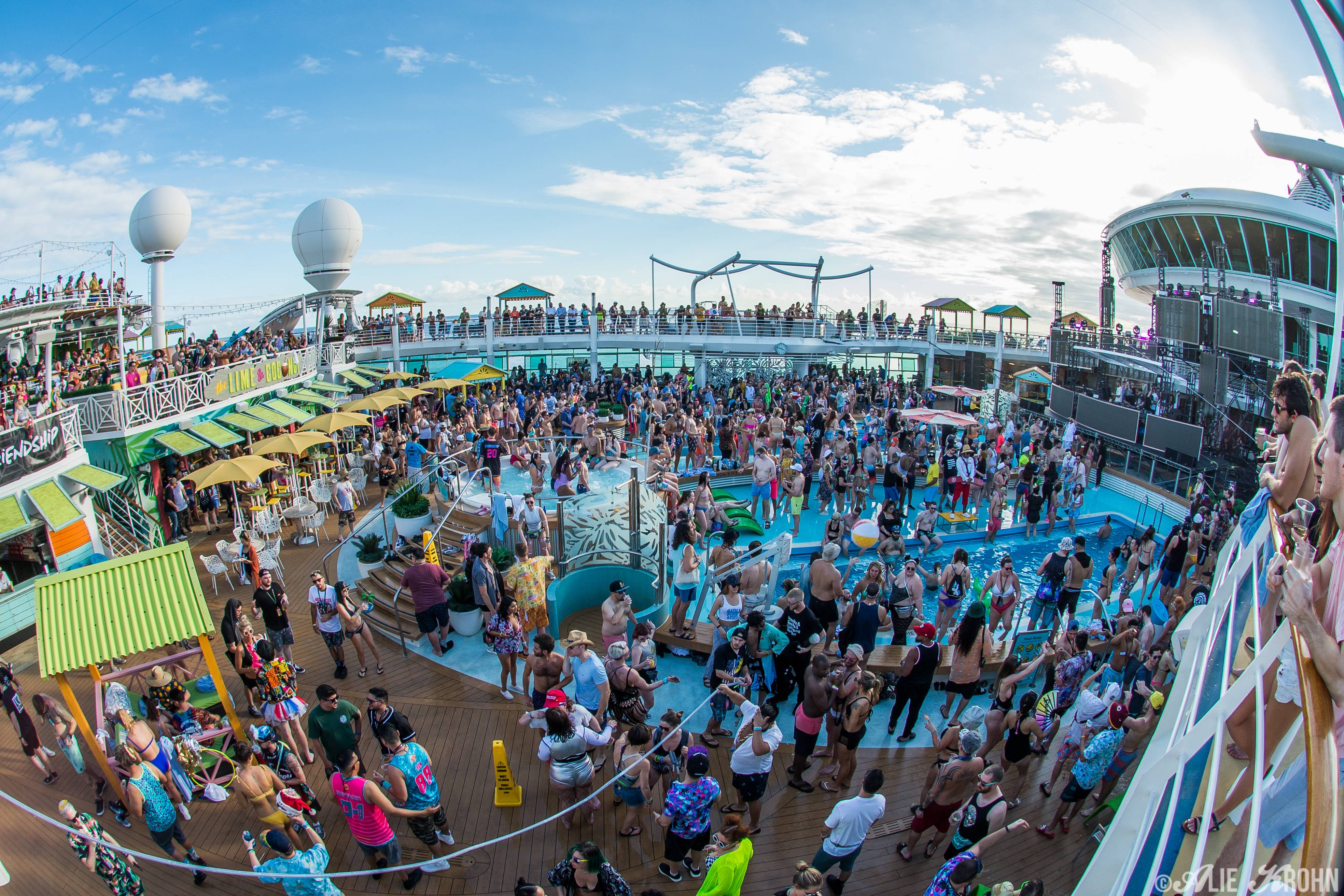 This year, the FriendShip team had a “For Fam, By Fam” merch contest, in which ShipFam attendees could submit merchandise designs to The FriendShip for a chance to have their ideas transformed into reality and sold in the official merch store (and score some seriously cool prizes in return). The community of ShipFam came up with some solid swag this year from baseball jerseys to patches and everything in-between including: snapbacks, track jackets, flags, and yes, even champagne stoppers. “For Fam, By Fam” merch was such a huge hit that most of the Fam designs sold out on the very first night. Everyone was eager to support their fellow FriendShip Fam and it was heartwarming to see the enthusiasm from the get go. 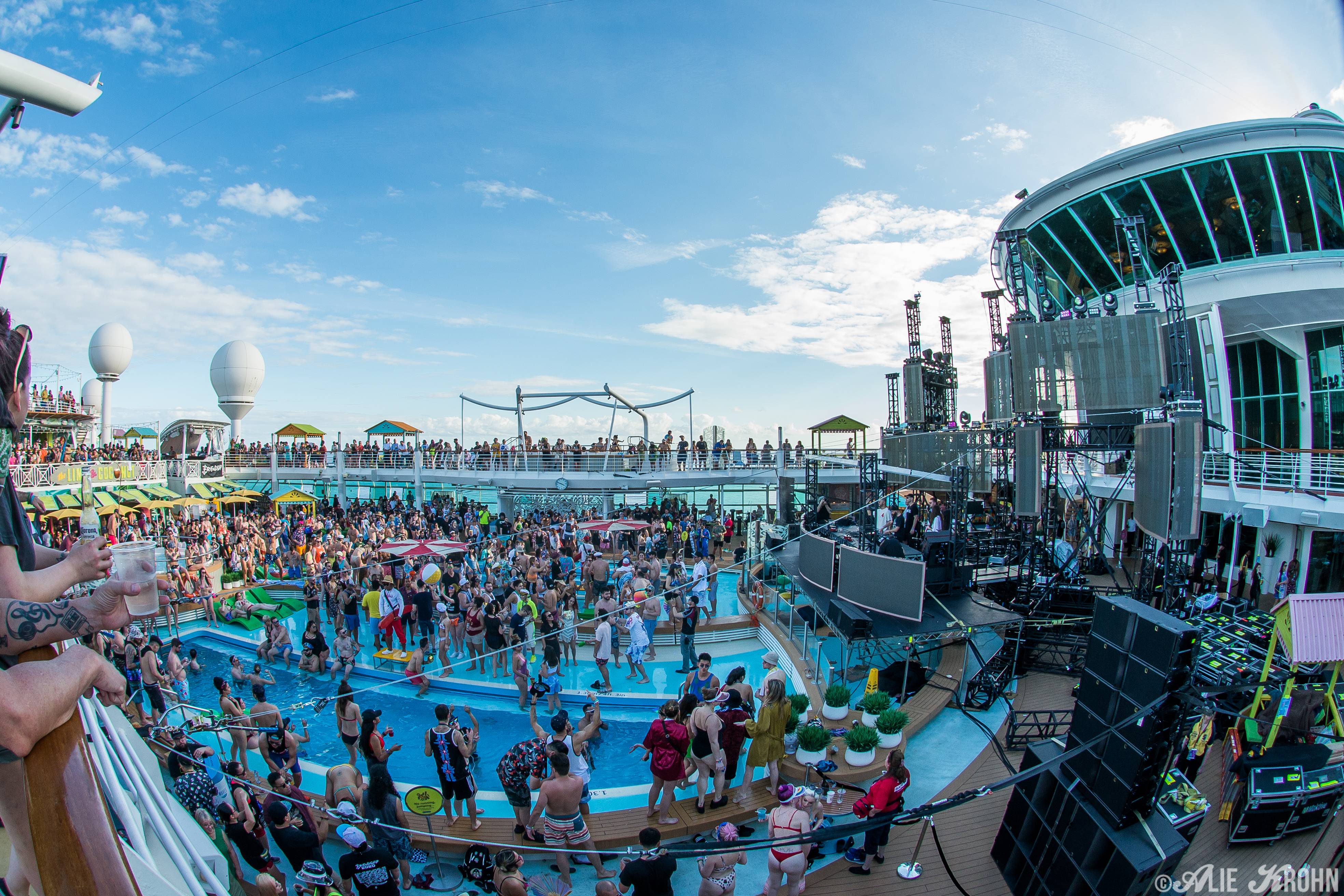 As the evening powered on, adventures found me discovering all of the stages– The Theater, Studio B, The Promenade, The Solarium, and the Star Lounge, all offering simultaneous music through day and night. Each stage had something special. The Theater was a dark, moody cove where you could rage right up front or take a seat in the balcony and drink in the views. The Promenade was at the center of the boat interior and had tons of places to get food and drinks while enjoying a DJ. The Star Lounge had “AMF” themed lighting behind the stage and The Solarium was behind the Pool Deck, so it had hot tubs! When docked at CocoCay there were three more stages off the Ship: one on the beach, one at a swim-up island bar, and one setup specially for a Destructo and Friends “Family Set” at ‘Captain Jacks’ bar to round out the night.

Although I had a general idea of which DJs I wanted to catch from the schedule, one of my favorite parts about The FriendShip is exploring and running into spontaneity - it’s one of the best parts of the whole festival! One of my friends, the DJ AMPRS&ND, ran by me at the Promenade and yelled “I’m about to go play at Star Lounge!” so I abandoned my plan, announced to everyone around me where to go, and booked it to the stage to see her perform. When we caught an elevator one night, it opened to reveal a pianist playing inside on a full upright piano! Of course, the most exciting secret sets to catch were those called up via Dial-A-DJ cards: on-demand sets that you could host in your room if you got a card from a staff member. DJs such as DUCKY, MIJA, Chris Lorenzo, and GRIZ held raucous room parties that hit capacity in a snap. There were also pop-up parties in the Library, Casino, and the Tiki Lounge. It’s important to explore every corner of the ship at all hours because there are always unannounced surprises. I had to remind myself to build in some time for sleep, because I was so excited and wanted to be everywhere at once. 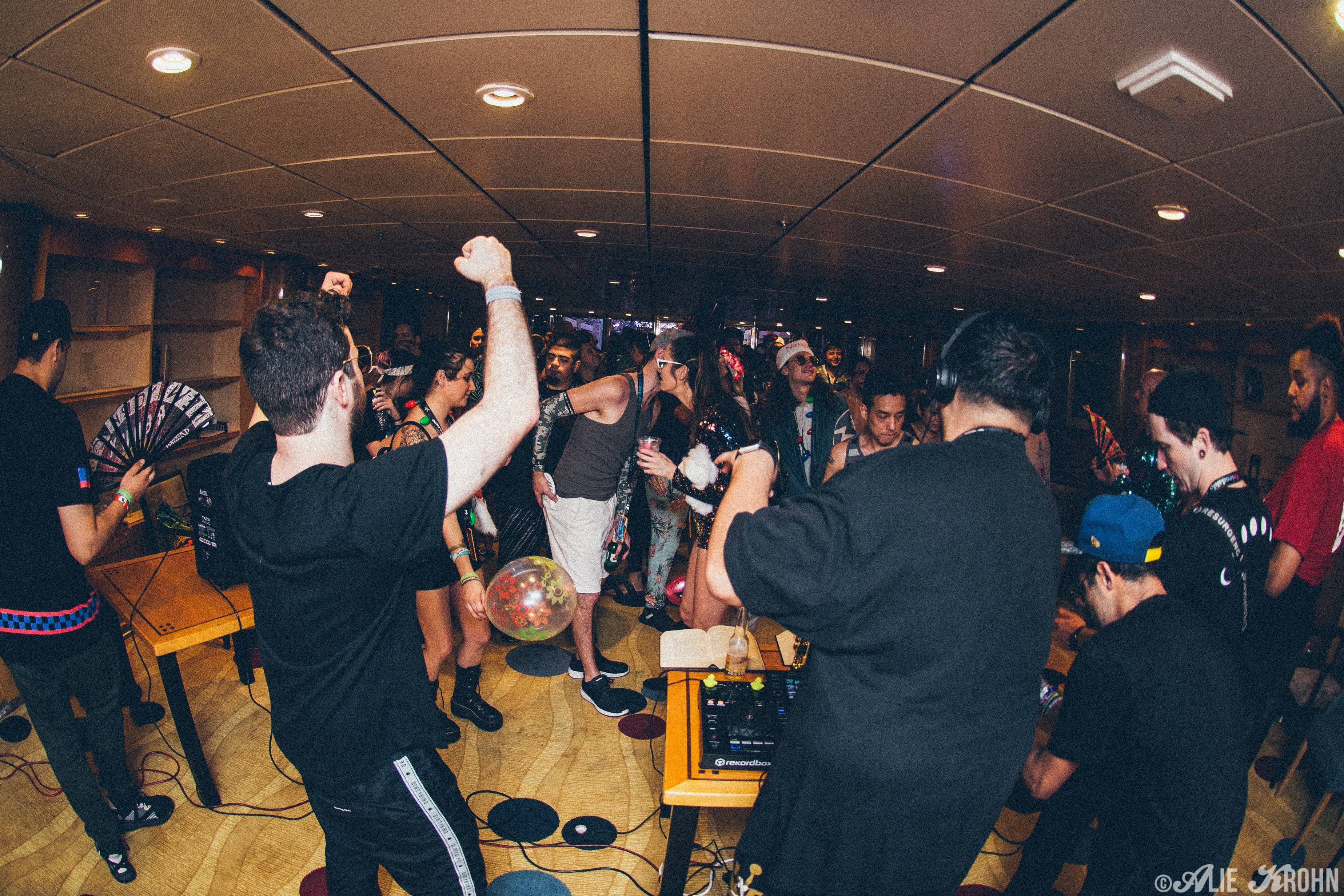 Along with Royal Caribbean’s many upgrades to Navigator of the Seas and their Port, they also rebuilt CocoCay in its entirety since the inaugural FriendShip sailing, and christened “Perfect Day at CocoCay”. This now includes the ability for the ship to dock at the island for the first time of any prior sailing on either Holy Ship! or the FriendShip. Game Changer! This meant that we were able to walk off and on the ship for the island day at our leisure, saving time and allowing us to get the most out of CocoCay. Many of our friends purchased the waterpark pass and spoke highly of the water slides. I opted for a more relaxed day enjoying sets from Destructo b2b Chris Lorenzo, TroyBoi, and BILLY KENNY – an artist who I’d not seen for quite a while. Billy Kenny ended his set with some booming DnB tracks, which I absolutely partied hard to from the pool.

The weather brought some intensely dangerous winds to CocoCay at the end of our first beach day, which unfortunately caused the cancellation of the second island day, but from the size of sea swells at night it was clear that without the dock we would have had no island days at all. The FriendShip more than made up for that with two full nights of ridiculousness at the Promenade, the backup location for previously scheduled beach sets. 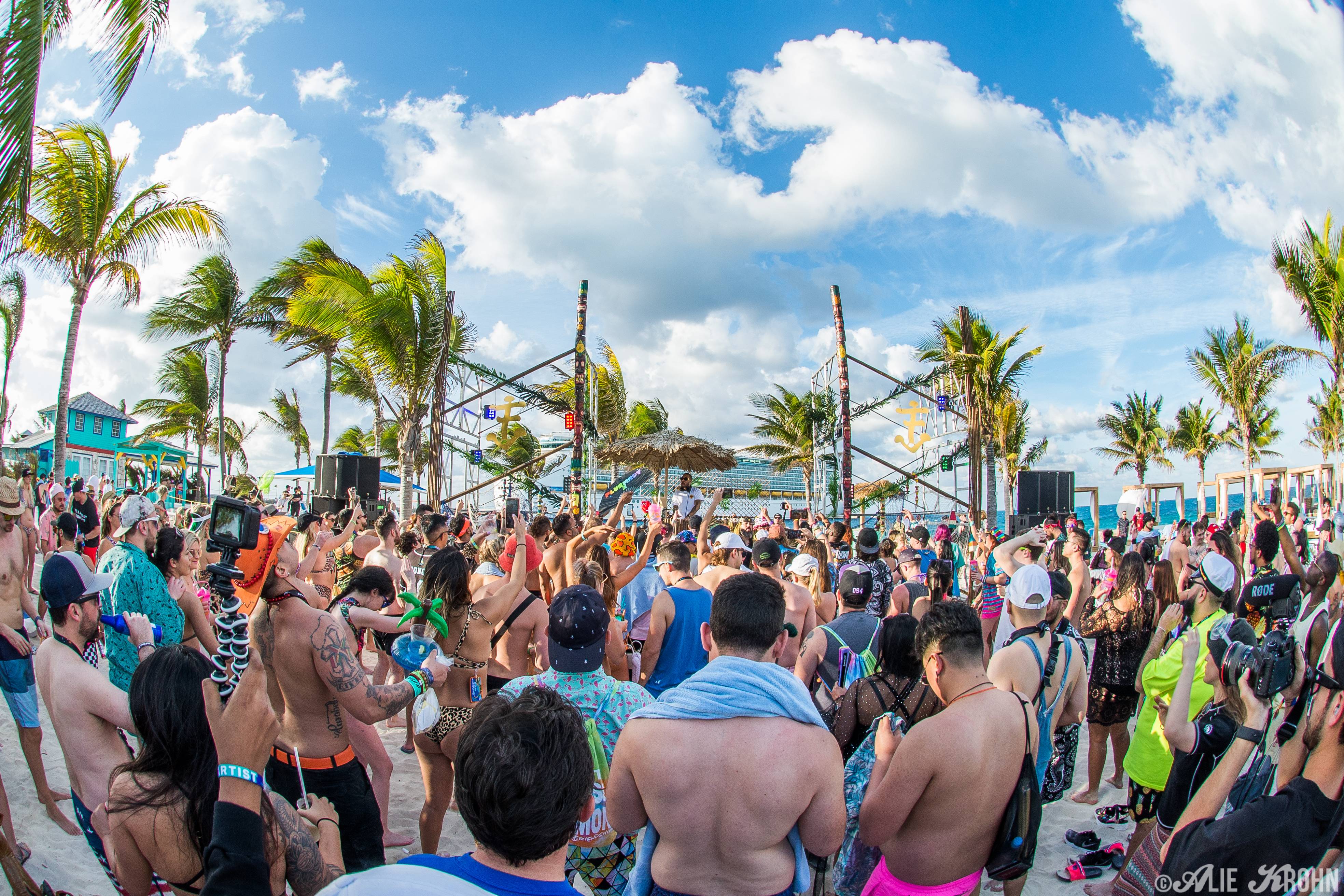 Although I was disappointed that we were unable to return to CocoCay on Thursday, the insanity of ShipFam energy that ensued as a result became one of my favorite moments on Ship. The sets were moved to the Promenade and lasers were added to the visual mix. The Promenade was a long hallway typically reserved for jumping from restaurants to the Merch Store, duty free shops and salon - but with the Beach no longer a stage option, the Promenade was transformed into a wild party of epic proportions. It was clear that the DJs had heard our pleas for more bass - LUCII, Ducky, BOOGIE T, and Griz all brought some absolutely filthy dubstep to the table. The Theater also boasted a Night Bass takeover with Argenil, Volac, and PHLEGMATIC DOGS, then a deep set from Bob Moses followed by a powerhouse party from AC SLATER. The vibes were high until the very last moments on Ship.

Although The FriendShip 2020 has come and gone, the memories we have made will last far beyond the week we spent together. I’m grateful that social media allows us to connect to each other with photos, stories, and messages when we are all apart. It’s no secret that I’m already looking forward to next year, and I can’t wait to see what Destructo and the team will dream up. It’s true what they say: “FriendShip is the Best Ship!” 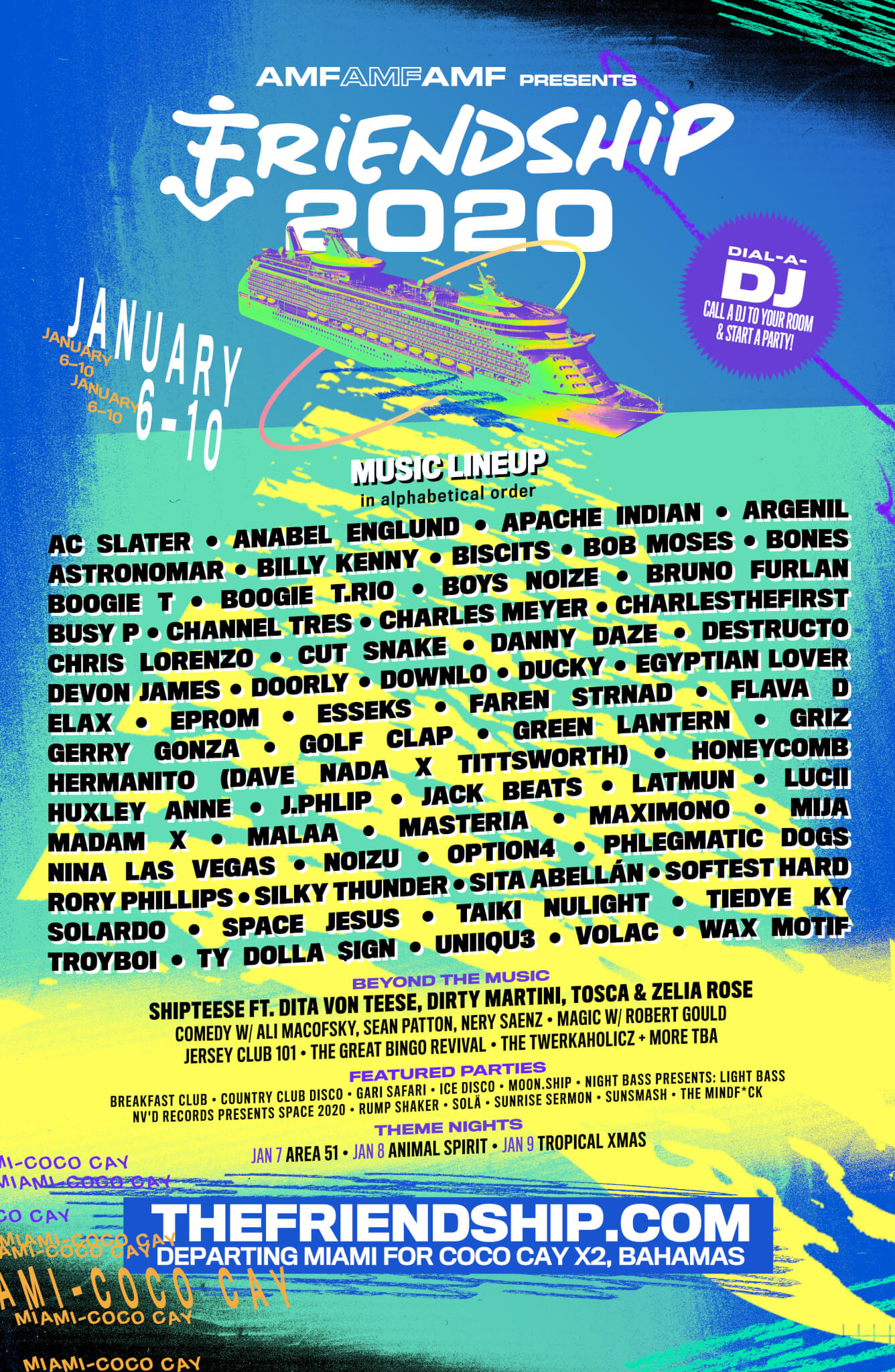 Article and photos by Alie Krohn and edited by Nick Verburg