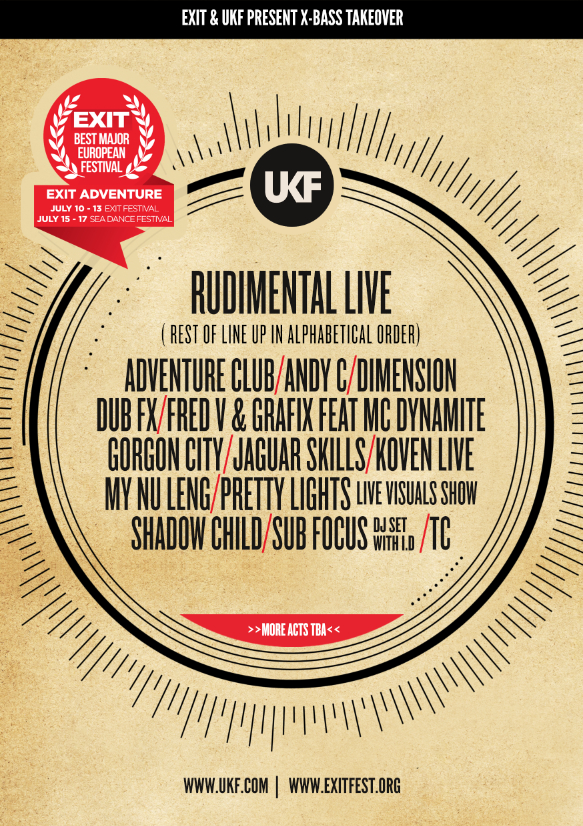 Representing the rude state of health electronic music is enjoying right now, the line-up UKF and EXIT have curated explores every inch of today’s biggest and best. From chart-smashers to underground pioneers, each corner of the dance is delivered with both clarity and consistency. Between 1am and sunrise every night from Thursday July 10 to Sunday July 13, the Petrovardian fortress walls will rumble and shake at the hands of the best contemporary bass talents out there.

Thursday 10th July is set to be a DJ connoisseur’s dream as hotly-tipped DnB sensation Dimension ignites proceedings and sets the scene for Jaguar Skills. One of the most razor-sharp DJs in the game, not to mention a regular on BBC Radio 1, he guarantees a genre-melting, free-for-all that will defy conventional turntable rules. To ensure EXIT’s opening night goes down in festival legend, they’ll be joined by none other than Andy C. A bona fide drum & bass pioneer with over 35 Best DJ awards to his name, the Ram Records founder knows exactly how to smash the EXIT main stage arena.

Friday 11th July is equally show-stopping. Joining the previously announced Rudimental and Koven Live are two of the most exciting acts to have emerged from the UK west country in recent years; Black Butter’s, sub-low tech maestros My Nu Leng and Hospital Records’ Fred V & Grafix. Between them they cover everything from dark garage to vibrant drum & bass. For added focus and fire, Fred V & Grafix have also invited a very close friend of EXIT festival to join them on stage - none other than the iconic Dynamite MC.

Saturday 12th July sees the arrival of Gorgon City. Leading the charge in the UK’s latest chapter in house music, their lush blend of pop soul and driving grooves have already dented the UK Top 10. Joining the UK duo with a perfect blend of bass and house flavours will be Shadow Child.

For a fittingly fiery finale, UKF & EXIT promise to pull out all stops for Sunday 13th July as they invite the mighty Sub Focus, TC, Adventure Club and Pretty Lights! Last spotted destroying the fortress in 2012, Sub Focus continues to add to his stellar reputation with more and more genre-exploding fusions. Joining him will be TC. One of the most respected names in bass music right now, his meticulous club constructions can be found on Skrillex’s OWSLA label and his own critically acclaimed We Don’t Play imprint. TC isn’t the only incredible EXIT debut signed and sealed for the Sunday either as Grammy nominated Pretty Lights is set to make his bow at Novi Sad. Revered for his extraordinary live show, expect to be melted by incredible visuals and moved by his exploratory hip-hop leaning beats.

To round off proceedings in style, Adventure Club will also be making their Exit debut this year. Enjoying a justifiably rapid rise to fame, the Canadian super-duo are one of the hottest names in electronic music this year. Demonstrating their power on some of the biggest labels in electronic music like Spinnin and Dim Mak, their creative multi-genre fusions and raw physical performances make them the perfect act to soundtrack the final hours of what’s set to be the most on-point, most exciting, most explosive line-up UKF and EXIT festival have ever curated.