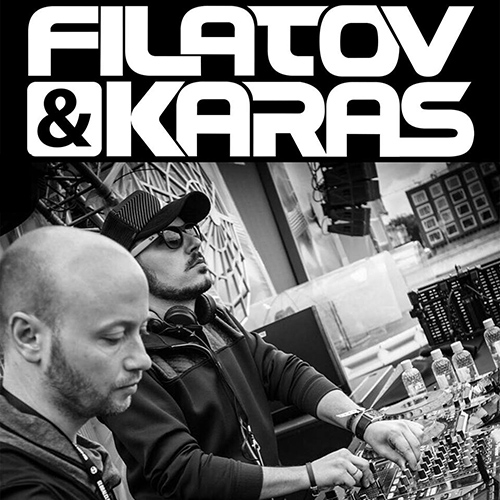 The sounds of Russian duo FILATOV & KARAS recently caught our attention thanks to a release of catchy single "Satellite" through Ultra. This pair are set to continue doing great things, and we wanted to hear a little more from them on how they got to where they are today.

How did you start off working together? What’s the story behind Filatov & Karas?

We’ve been working many years as solo producers and under different band aliases like - Sound Fiction, Filatov & Soloviev, Raduga, Te5la and Man-Ro. 4-5 years ago we decided to make one EDM tune and suddenly we got a reply from all the 3 members of SHM. Steve Angelo even wanted to release it on Size, but nothing happened. We decided to continue and created a band called “Red Ninjas”. After 2 years of hard work, we found the idea unsuccessful (no one needs good tunes without the success story behind them). So we switched on a local market and started to produce instrumentals and remixes for different pop/rock artists. Suddenly we got platinum success with our remix of the Imany song “The Good, The Bad and the Crazy”. It was Number 1 for 10 weeks on Russian iTunes. As a result the record company wanted us to produce another remix for them and we thought that “Don’t Be So Shy” could be a hit. So that is how we got a worldwide hit!

What initially inspired you both to make music?

Other music. We wanted to create something... it was in the mid 90's. At that time the process was much more complicated than it is now. So the inspiration came with every new program-sequencer: Dance Machine, Trackers, CakeWalk with analog synth, Acid from S.F., then Reason, FL. At that time we couldn't even dream about Logic or ProTools.

Do you feel you’ve influenced each other’s styles?

Filatov - No. I think i would make the same music style alone. But of course Karas brings some good ideas. Working in a team is always better.

Karas - Yes. Before I never wore sunglasses during shows =)

Are there any new producers that you’re shouting about right now?

Of course! There are a lot of talented guys, but we would like to pay attention to the local independent fellows who need that support now - Matvey Emerson, Andrey Exx, Andrey Keyton.

After your previous remix successes, are there any more in the pipeline at the moment?

Can you tell us a bit about the recording process for "Satellite"?

That is our own original single. Filatov composed the top line and wrote the choruses with the breakdown and our record partner from Warner Music Greece - Nektarios Tyrakis, who made already couple songs for Eurovision contest, helped us with the lyrics for the verses. The voice belongs to our vocalist that we are currently performing with.

How has it gone down in your sets?

It is really strange, but it works 100% on the dance floor. Especially for the girls. That never happened before with a tune that is not very known! It has all the elements to become a big hit. Now we need luck!

Do you have a personal favourite tune of yours?

We love all of them, but "Satellite" is great. And we have more to come!