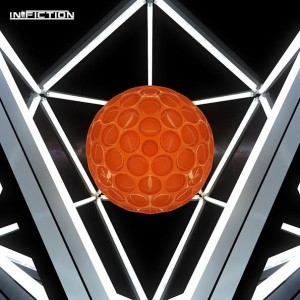 In the seemingly mass-produced world of electronic dance music, the duo INFICTION, (hailing out of Los Angeles, California) breaks the trend with their new album “Europa.” “Europa” takes the listener on a journey to the space age of music. With several eclectic styles ranging from house and trance to lounge music, this album is a sure fit for any advocate of electronic music.

Following in the well traveled footsteps of EDM legends like Chicane,Lange or the Front Line Assembly side project, Delerium, InFiction is a breath of fresh air in an otherwise unimpressive sea of mediocrity that has become the EDM market.

Their second and most mature album to date “Europa”, begs the question, “when exactly did EDM lose it’s mojo?” Many EDM acts these days have just become mirror images of a very tired club market. Gone are the days when you can just get lost in the music without having to endure another night of endless repetition and lackluster songs.

InFiction is bringing back a long defunct style called IDM which we have not seen since the 90’s. IDM or (Intelligent Dance Music) combined ambient and atmospheric music that bordered on New Age. With the addition of hard hitting beats, stabbing synths and unforgettable melodies, this “intelligent” new music transcended both time and space.

Though InFiction has not reinvented the wheel, their unique sound proudly stands out amongst most of the current club fare. Their new album “Europa” stands as a powerful testament that mature, more “intelligent” dance music is surely on the horizon.

To label “Europa” as a trance album, is simply a gross miscarriage of justice. There is something here for everyone and surely something that will satisfy even the most sensitive of pallets.

This fantastic album starts us off with a unique track titled “Before The Mist.” It consists of a series of uplifting chords, funky beats (reminiscent of DEADMAU5) and angelic vocals. “Before The Mist” begins in a sea of euphonic sound and voice, provided by Aeone. Before you can blink an eye, the track takes a very unexpected turn that leads into a dramatic build up.  It then explodes into a funky house beat before dropping out to reveal a lush and  cinematic soundscape. “Before The Mist” is an excellent way to begin our journey of “Europa”.

“Go” features a more pronounced beat, but there is still a hint of the same ethereal sounds as described in the previous track. “Go” commences on floating waves of dazzling synths, while a strong kick brilliantly carries the tune. These atmospheric sounds of space-age euphony, seem to be the overall theme of the “Europa” album.

“He’s Got A Blaster” carries  a name befitting for the song. “He’s Got A Blaster” literally blasts our ears with a pronounced electro march that most assuredly appeals to any modern day fan of EDM. Well placed vocal samples add a tasty touch to InFiction’s crafty blend of  electro and funk. Like clockwork, this clever track proceeds to break into an uplifting harmony, with just a hint of panning vocal samples. This fantastic effect is almost the polar opposite to its hard driving electro sound.

“Lolita” also does not stray from InFiction’s winning formula. Quickly diving into a pool of alien sound, “Lolita” breaks off into pulsating chords and percolating synths that marvelously melds it all together before reaching it’s glorious climax.

If a song were able to show us how to sparkle and shine, “On November” would definitely be the one to do it. “On November” is a plethora of scintillating sounds followed by uplifting vocal samples that resemble a choir. It’s heavenly sound and ominous architecture will truly deliver an “out of body” experience.

“The Balance.” Quickly comes to the attention of the listener as this song is different than the rest. Luxuriant synths playfully dance on a bed of deep grooves and commanding beats. The Science fiction element is omnipresent  as the unmistakable voice of HAL 9000 from 2001: A Space Odyssey, emanates from the dark soul of the record creating a chilling, almost haunting effect.

“Weekend” is perhaps the most club –friendly track out of the bunch. It’s hard hitting melodic trance style will be a complement to any peak hour set.  Taking cues from some of the greatest minds of the emotional trance sect, “Weekend’s” clever sound might just surprise you. If you are expecting the same old trance fare, think again. “Weekend” packs one hell of a powerful punch that will have dance floors exploding into uncontrollable fits of ecstasy.

Though “Weekend” breaks off into the zero gravity field, the deep rolling synths surely will energize a trance floor.

Last but not least, is an exclusive remix of David Bowie’s smash hit “Let’s Dance.” InFiction pays tribute to the pop legend by completely transforming the 80’s classic, while still managing to keep the original integrity of the record intact. With a delicious blend of David Bowie’s inimitable vocals and an uplifting symphony of moody string arrangements, “Let’s Dance” is a tour de force that you simply cannot afford to miss.

InFiction did a supremely exquisite job in composing their out-of-this-world album entitled “Europa.” It is highly enjoyable from start to finish for any fan of electronic music.  “Europa”is an incredible voyage of sound that will leave a long lasting impression. With more commercial sounding tracks like “Let’s Dance” and “Weekend” “Europa” is sure to gain mainstream attention as well. Whether it’s hard beats or a tranquil and relaxing experience you seek, “Europa”  has just what you need.

Be sure to run out and buy InFiction “Europa” now. As an added bonus, you will receive a special remix of their international hit “Let’s Dance