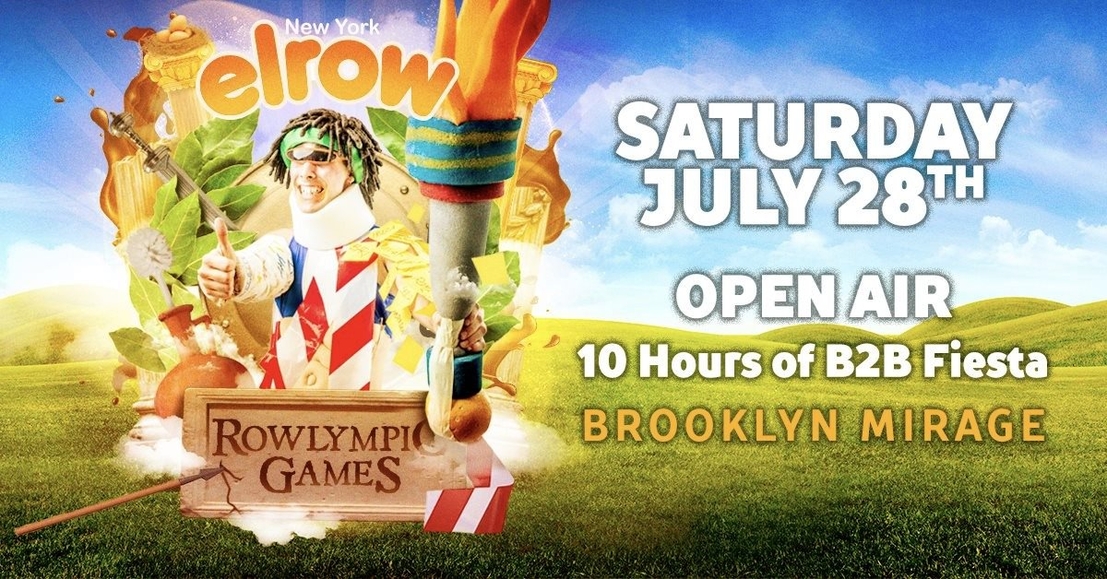 Everyone's favorite Spanish house party is back at it again in New York with their Rowlympics themed 10 hour immersive B2B dance party being held at The Brooklyn Mirage in East Williamsburg, New York City on July 28th. There is really nothing in the world quite like an Elrow party. Aside from the extensive decor, the vibe you get from an Elrow party just can't match anything else you have every witnessed. With a stacked lineup rolling out B2B sets across 10 hours, this is an Open Air event series you surely do not want to miss.

Santé got into house music through sampling at age 16 and apprenticeships at engineering studios in Berlin. Santé who has remixed Grace Jones, Depeche Mode, and many others has been a must-have on festival circuits and in party meccas like Ibiza, London, New York, and Miami for years nowi. He recently released an exclusive track on the elrow V2 compilation. Hailing from creative hotbed Bristol, England, “bearded and cuddly” WILL CLARKE made a splash with “Booty Percolatin” in 2016 and has since become a regular member of Claude VonStroke’s Dirtybird family. Also no stranger to the Dirtybird camp is EATS EVERYTHING, donned as “Best British DJ” by DJ mag and ranked in the Top 15 by Resident Advisor, he’s known for his majestic sets that get the party started. In 1996, Charles Siegling and Amil Khan founded TECHNASIA as a way to bridge the house music east-west divide. In 2010, Amil left and Charles continued Technasia as a solo artist. His label, Sino Records, has helped launched the careers of DJs like Joris Voorn. He has played everywhere from Zouk in Singapore to Berghain in Berlin.

The July 28th event is part of elrow’s roaming New York residency that began in 2016. Their sold out April 21st gathering at Avant Gardner, “Nomads, The New World,” theme transported revelers to a “Star Wars meets Avatar” dimension, will also debut in Las Vegas in October, further extending elrow’s presence in the U.S. As with their three previous sold out shows in New York, more than 2,500 early bird tickets for Rowlympics were snatched up in less than 24 hours based solely on word-of-mouth, without any musical talent announced.

Eats Everything B2B with PATRICK TOPPING

Will Clarke B2B with SANTE

This is the first North American outdoor event for the world’s leading event production company with six generations of experience promoting unforgettable spectacles. One of the biggest attributes of elrow is their mission to create an immersive experience in an enchanted environment that completely surrounds you, so that you feel that you are inside it and part of it. Performers interact with guests, who become actors in the story, integrated into a psychedelic circus-like environment and vibrant atmosphere unlike any other. It’s been described by media (RBMA) as “a cross between Cirque du Soleil and Burning Man.”

Get your tickets now, HERE!