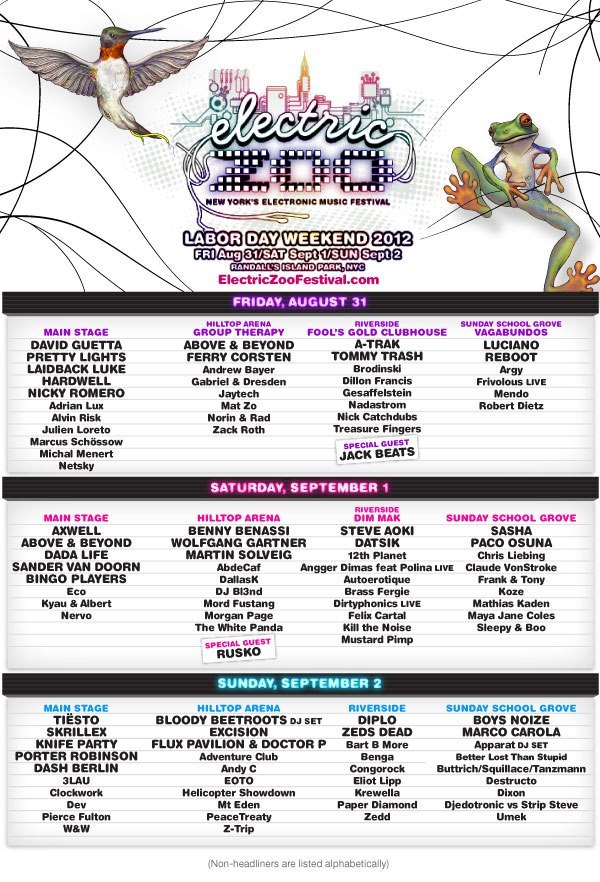 It's Electric Zoo week in New York, and the city is preparing for its large annual event, attracting visitors from all over the US to the Big Apple. On Friday, the Sunday School Groove stage will be taken over by LUCIANO and his Vagabundos crew all day. For those unfamiliar with Luciano, he is a major staple in Europe and South America – he owns the very successful label, Cadenza and established a residency in Ibiza at Pacha. He will be accompanied by ROBERT DIETZ, MENDO, FRIVOLOUS, ARGY and REBOOT. These DJs have produced some of the biggest hits on Luciano's label and are sure to bring a rocking party vibe that you would expect in Ibiza over to New York.

On Saturday, the stage will return to normal, except the lineup will be packed with nothing but big name techno and tech-house DJs. MAYA JANE COLES, who has been taking over the world with her amazing productions in the past two years, will be making her Electric Zoo debut. MATHIAS KADEN and DJ KOZE, who have a strong following in Europe, will also be displaying their talents on the same stage with Dirtybird boss, CLAUDE VONSTROKE, and techno heavyweight, Chris Liebing. Finishing off the night will be PACO OSUNA, whose stardom has been rising at an astronomical pace the past three years. Plus legendary DJ SASHA, who had a five-year residency in Twilo with John Digweed in the mid-90s and holds a special place in New Yorkers' hearts.

On the final day, Sunday School Groove won't hold back punches as more great techno and tech-house DJs grace the stage. DESTRUCTO will start the day off and will be followed by DJEDJOTRONIC vs STRIP STEVE. MARTIN BUTTRICH, DAVIDE SQUILLACE, and MATTHIAS TANZMANN, who make up the trio 'Better Lost Than Stupid', come up next on the stage. Individually, each one of these men is a huge draw, so it will be a treat to watch all three of them play together on Sunday. UMEK and DIXON will also have the crowd roaring and dancing from start to finish. The two main attractions on Sunday will be BOYS NOIZE and MARCO CAROLA. Though Boys Noize may be a bigger name in the US, Marco Carola has a massive following in Europe and Ibiza; over the years, Marco has won people over with his amazing raucous DJ sets that have been known to leave dance floors in shambles after a night filled with nonstop dance music. All three days of Sunday School Groove will be amazing and are a definite must see – at least once – for those who are planning on going to Electric Zoo only for trance and the headlining DJs on the other stages.