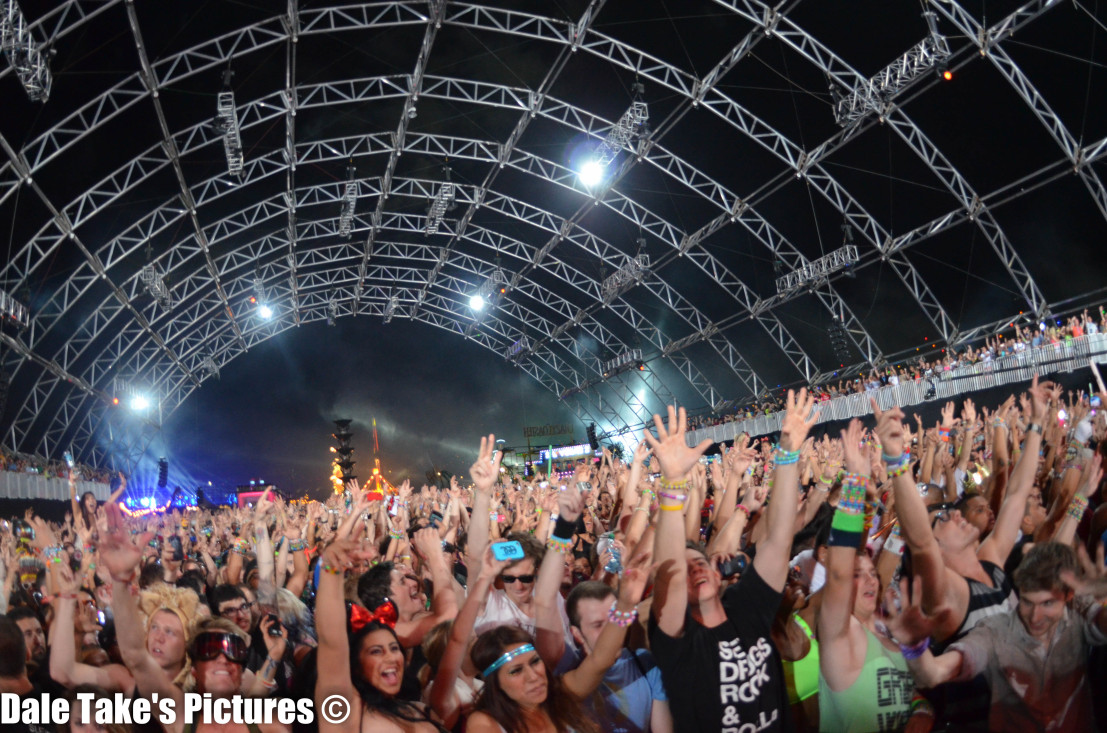 After an excruciating two hour, traffic-packed car ride from the Las Vegas strip, I walked in the gates of the Las Vegas Motor Speedway not knowing what to expect. Having never been to Electric Daisy Carnival, or a rave of its magnitude, I was fully prepared for the worst things possible: 12 year olds sucking on pacifiers, thousands of people seizing on the ground, and awful, hardstyle and dubstep noise that I wouldn’t be able to bring myself to dance to. Once I actually gave the festival a shot, it grew on me.

The first DJ set I enjoyed was MAT ZO who played at the Circuit Grounds Stage which was a treat for all senses. As the crowd started to fill in, the lights became more stimulating and eventually I lost all sense of what or who was around me. I was quickly enveloped by the EDC experience. I’ve for sure lost track of my body and whereabouts at a music festival before, but never in this way. EDM has a profoundly different effect on the senses than any other genre of music and in the festival setting; the opportunity to lose control is thrown in your face. Before I had the chance to get my bearings, the familiar sounds of ABOVE & BEYOND flooded my ear drums and brought me right back to reality. My group soon left the Circuit Grounds Stage and headed towards what became my favorite set of the night. Fabian Campos, a local DJ from San Francisco was playing at the Discovery Stage. Fabian literally brought a smile face with a less than crowded atmosphere and some banging TECH! We ended our first morning at the Kinetic Field for FEDDE LE GRAND’s closing set. The visuals were awe inspiring and included dancers, fireworks, insane lights and my favorite, fucking lasers!!!

After my interview with ATB, our second day started off quite earlier than our first, leaving with the hopes of missing traffic. Saturday was by far my favorite line-up and I could not wait to check off some of my “must see” DJs. Cosmic Meadow was the place to be with the likes of DUBFIRE, RICHIE HAWTIN and LOCO DICE performing. Unfortunately, right as I was starting to stomp my feet with the utmost purpose to Gaiser, an announcement came on that the winds were too high and that all the attendees of the festival were to file up into the bleachers in hopes of the winds dying down. This, however, was not the case and we soon left with the rest of the 100,000 people feeling like we were all on a giant bad acid trip.

After raising our low spirits from the day before, our crew managed to pull it together and go enjoy the final day of festivities getting to our home base, Cosmic Meadow, just in time to hear the last of GREEN VELVET’s hard-hitting set. Umek was on next. The bass was hitting so hard that I swear my heart was now pumping to the beat. It was almost too much bass, but that’s a big almost. To my surprise, CARL COX was my favorite of the night. Being the most well known artist at that stage, I didn’t expect Carl to blow my mind like a hungry hooker, but he did. He didn’t leave any room to breathe. Every second of his set projected body clenching, muscle moving sound. The night soon finished with one of my tech heroes, Danny Teneglia who had the whole crowd moving like in sync tourettes patients. That is precisely how I will remember EDC 2012.

Now it’s all said and done, what I can say about EDC is that it most certainly did measure up. It may not be the scene for everyone, but I cannot deny the absurd amount of talent that the people at Insomniac brought to one place. Like the old saying goes, “don’t knock it ‘till you’ve tried it.” You may end up experiencing some of your favorite music in a wholly different and unexpected way, just like I did.