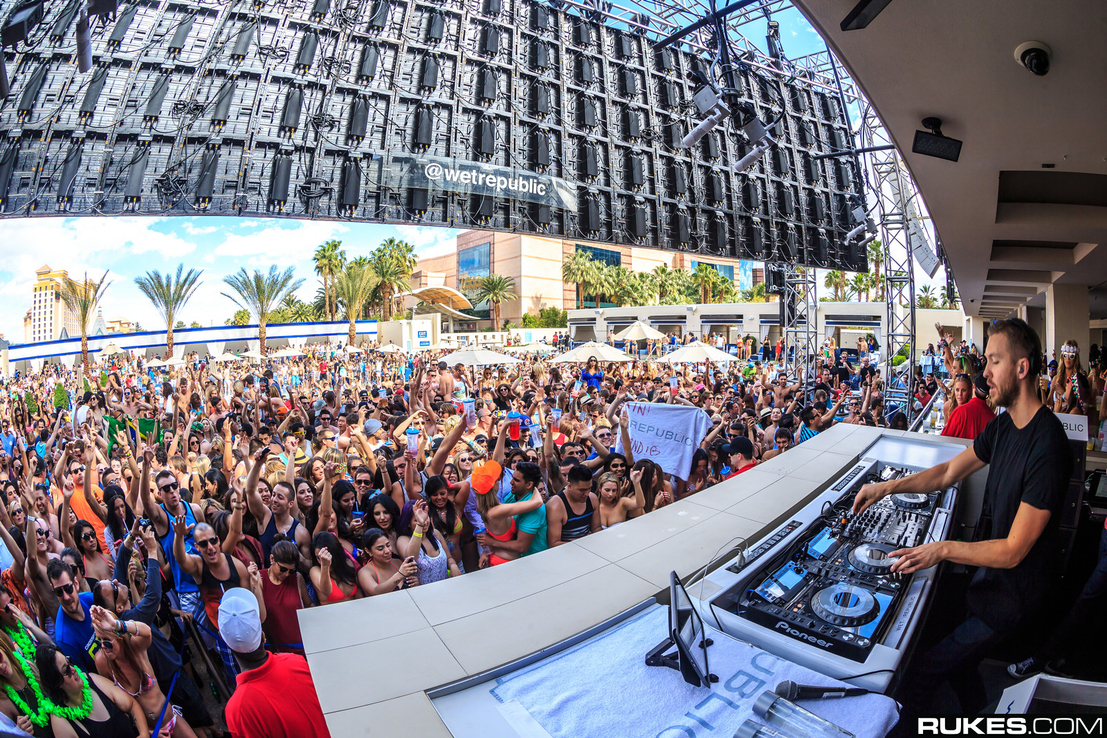 Electric Daisy Carnival 2014 and it's plethora of amazing day parties and clubs events will soon be upon beginning next week. Here at The DJ List, we are exciting to present our EDC Week guide to all the events you simply cannot miss. So start planning and don't forget your sunscreen.

Citizens...expect MGM's premiere nightclub Hakkasan to be transformed into Dada Land on Wednesday night. Plenty of party goers are expected to arrive beautiful and leave ugly. So get ready to an insane night that will most likely include bananas and champagne. Be sure to watch their music video for “Born To Rage”.

Trance titan DASH BERLIN will be closing out the EDMbiz Conference & Expo at The Cosmopolitan's Bouelvard Pool with Norway's very own Kygo who has been producing the best feel-good summer anthems lately this year. Be sure to listen to Dash Berlin's newest record "Underneath the Sky" featuring Christon Rigby and Kygo's take on Coldplay's "Midnight".

Mad Decent favorite, MAJOR LAZER, will be performing at Encore Beach Club for their residency at Wynn in Las Vegas. They just recently put out their video for "Come On To Me" featuring Grammy award-winning, platinum-selling dancehall artist, Sean Paul from their Apocalypse Soon EP, that has been out via Mad Decent/Secretly Canadian. The video, inspired by classical Kabuki theatre known for the stylization and elaborate make-up worn by the performers and directed by Ruben Fleischer who is responsible for Zombieland and 30 Minutes or Less, opens to a barrage of tribal drums and a group of Kabuki performers syncing dance moves to this catchy dance floor anthem.

Above & Beyond with MARK ETESON―Wet Republic, MGM Grand

Anjunabeats' forefront icon ABOVE & BEYOND will be keeping the party going at Wet Republic with rising Hakkasana resident Mark Eteson. Above & Beyond have recently gone #1 on the U.S. iTunes Dance chart with their recent compilation "Anjunabeats Volume 11". Be sure to listen to the mini-mix.

No doubt this will be the bass heaviest day of EDC Week! Bassrush is throwing a pool party at the Paradise Pool at Hard Rock Hotel with a full line-up of versus sets from BRO SAFARI, LOUDPVCK, CRIZZLY, PROTOHYPE, DIRTYPHONICS, ETC!ETC!, OOKAY, KENNEDY JONES, MAYHEM, HEROES X VILLIANS, ED RUSH, OPTICAL, MACHETE & SCOOBA and CLUTCH & NO FACE, get ready to be pounded with some hard-hitting bass beats.

We last spoken with the Doorn Records label boss, SANDER VAN DOORN, during his last record pool party in Miami. Sander will be hosting another label party with Doorn talents Firebeatz and Julian Jordan. Be sure to watch the music video on Sander van Doorn's recent collaboration with DVBBS and MARTIN GARRIX "Gold Skies" featuring ALEESIA.

DVBBS has definitely made their mark in the dance music world for their insane big room drops. The power duo will be performing alongside Tom Swoon at Drai's nightclub at the Cromwell hotel. Be sure to check out their summer anthem "Gold Skies" with Sander van Doorn and Martin Garrix featuring Alessia and Tom Swoon's latest episode of "Lift Off" radio and his preview on "Holika" to be released soon on Ultra Music.

Diplo, the Mad Decent honcho, will be playing Encore Beach Club at Wynn. DAWN GOLDEN's recent debut LP release last month "Still Life" received a DIPLO remix on the single "All I Want". Diplo also teamed up with DIMITRI VEGAS & LIKE MIKE and FATBOY SLIM on FIFA World Cup anthem "Eparrei". "Eparrei" is an unparalleled slice of electro mambo, fusing cutting edge EDM with the sounds and culture of Brasil. The new summer anthem also features Brasilian electro funk group, BONDE DO ROLE who has a unique take on the local ‘funk carioca’. We can safely expect some Brazilian vibes to be in Sin City during this week.

The grammy-award winning artist, ZEDD, will be performing at XS Nightclub. Be sure to watch the acoustic music video on "Find You" with MATTHEW KOMA and MIRIAM BRYANT. The track is already an impeccable song that is transformed into pure musical bliss.

Get your bounce on at Daylight Beach Club with GTA. It’s gonna be dirty, sexy and full of hype at Mandalay Bay. Armed with endless creativity, a tireless work ethic and a fierce dedication to their craft, GTA are carving their name into the minds of dance floors freaks everywhere, and you can count on them to deliver the goods, each and every time. Be sure to check out their take on Iggy Azalea "Fancy" featuring Carli XCX.

Steve Angello will be bringing the sound of Size Records to XS Nightclub. The word icon is liberally tossed around the modern music industry. But casually dressed and exceedingly loyal to his vocation, familial House veteran Steve Angello has encapsulated those values with more persuasive vigor than the vast majority of his long serving peers. Never one to hinder under the weight of tribulation, his legacy can be found as comfortably cramming the venues once unfathomable to electronic dance music as it does the Beatport charts with essential new talent. Passion may have seen him pioneer the Stockholm underground, but innovation has seen him join the ranks of luminary mafia man.

Revealed favorites Dannic and Dyro will be performing a duo set at Liquid. Dannic, the highly prodigious DJ and producer from Breda in the Netherlands – the hometown of Tiësto & Hardwell – has already achieved a great deal since exploding onto the scene. Read up on the interview we had with Dannic during their North American bus tour. Be sure to check out Dyro's music video on "Calling Out".

2014 is set to be another milestone year for Afrojack as he releases his second single ‘Ten Feet Tall’, starts a new DJ residency at Las Vegas hotspot Hakkasan and releases his debut album with Island Records. Afrojack released his album "Forget The World" last month. Apster has had releases on labels like Spinnin' Records, Afrojack’s Wall Recordings and Steve Aoki’s Dim Mak and remixes for Laidback Luke, Sidney Samson, the Bingo Players and Hardwell. All big achievements that make 26-year-old Abdesamad Ben Abdelaouid, better known as Apster, definitely stand out from all the talented DJ/Producers that the Dutch house scene has to offer.

The rise of Hardwell as a young boy from the city of Breda into a ripened international super-heavyweight has become an inspiring tale for all. Coming full circle from a dream to reality of wanting to become the ‘#1 DJ in the World’, we can be assured that the Hardwell name, face, and brand is a force that will drive electronic dance music for years to come. Be sure to watch Hardwell's aftermovie from his North American bus tour and the music video for "Everybody Is In The Place".

Kaskade brings the heat his summer residency with revamped production featuring a 70’s flare at the Marquee Dayclub. The night and daytime season-long party will bring back the unparalleled production value that Summer Lovin’ is known for with a fresh look and feel. Guests will travel back in time with Kaskade as the venue transforms into a 1970’s party. Be sure to watch the experience.

Having recently finished up a huge takeover tour, the 24-year-old electronic imagineer focuses on little more than the story of community, creativity and commitment that has taken him from warehouse parties in Los Angeles to a defining role in the modern zeitgeist. Skrillex's label OWSLA, recently partnered with Bridges For Music to establish a new studio and music school.

Dance producer Calvin Harris went from posting his music online to producing material for Rihanna and selling millions under his own name within a few years. A talented remixer and DJ as well, he has won Grammys and MTV VMA awards, broke Michael Jackson's record for the most U.K. Top Ten singles from one album, and was named Forbes' highest earning DJ in 2013. Be sure to watch the music video on "Summer".

After bursting onto the scene in 2011, the Chicago-bred trio was immediately recognized for their signature brand of vocally driven electronic music. Comprised of singer-songwriter sisters Jahan and Yasmine Yousaf backed by producer, Kris “Rainman” Trindl, the young trio vows to bring the rock to the rave. Since their massive debut with platinum-certified single, "Alive" they have gone on to become renowned for their unprecedented live energy at the world's largest and most legendary festivals. Be sure to check out their upcoming compilation on Ministry of Sound.

Avicii had only been producing a few months when his friends noticed that the productions were amazingly professional and that they had just witnessed a great talent being born. Avicii started out with doing a remix of the theme music for the Commodore 64 game ‘Lazy Jones’, but decided to drop it as it inspired him to make his own ‘Lazy Lace’ – released almost immediately on Strike Recordings. Be sure to watch the music video on "Wake Me Up" that has received worldwide acclaim.

Skrillex will be playing alongside Diplo possibly under their newfound duo alias "Jack U" with RL Grime (aka Clockwork). Be sure to listen to Jack U's debut performance at Ultra Music Festival earlier this Spring. RL Grime's melodically infused, Houston influenced flavor connects the roots of southern hip hop with the new age of electronic dance music and in turn dictates our understanding of what it means to be a 21st century producer.

After a recent signing to Ultra Music, DJ Carnage is gearing up for the release of new single “Bricks” featuring Migos on June 17. He appeared on Sirius XM’s Sway In The Morning last week where he teased a sample of the audio. Following the success of recent singles “Michael Jordan” and “Incredible,” as well as his “Bang” EP on Fool’s Gold, “Bricks” marks the first of a slew of new music. With “Bricks” combining his EDM and hip-hop influences more seamlessly than ever before, fans can expect a number of genres to be experimented with on upcoming releases. In the words of Carnage, “I do what I want and the world has to deal with it. Game on.”