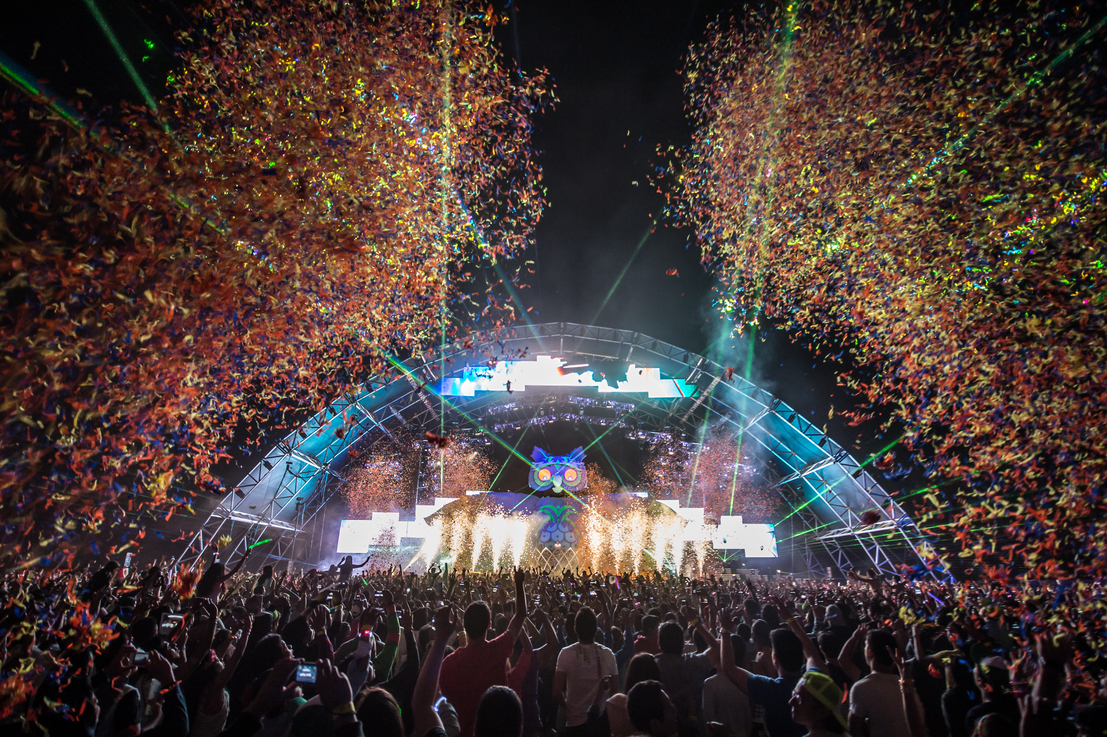 I've attended more Insomniac music festivals than I’d care to admit and I've been to more Electric Daisy Carnivals than I can count on one hand. It's safe to say that I'm more than an EDC seasoned veteran, but the atmosphere awaiting me as I walked through Gate 8/9 of the Mexico City Autodromo Hermanos Rodriguez Motor Speedway had my stomach somersaulting like it was my first EDC all over again.

The journey to EDC Mexico 2014 started early Saturday morning (March 15). I sat on the Van Nuys Flyaway- a bus that transports travelers from a nearby city to the bustling Los Angeles International Airport- with a cloud of anxiousness hovering overhead. Having never been to Mexico, I only had the horror stories family and friends had warned me about to go off of. I could hear their voices reiterating the dangers that would await me as I crossed the notorious borders. To say I wasn't nervous about the trip would be a total lie and the reality sunk in.

I've had an unwavering love for music my entire life. Literally eating, sleeping, breathing and essentially living for music and reporting. It was a norm I never once contemplated, until the thought dawned on me. Was I willing to risk being robbed, kidnapped or worse for the sake of music? The answer was an affirmative "hell yes!" I knew I was embarking on a once in a lifetime adventure and I had to make the most of it, so I put my big girl shoes and was ready to dance under a new coordinate of the electric sky.

I landed with just enough time to rush to my hotel room in sunny Mexico City, where my friend and I quickly dressed ourselves, sporting daisies in our hair to show Mexico the Southern California EDC spirit.

The taxi ride to the event harbored our anticipation. We grew more impatient with each passing street. The driver had no idea what we were saying, but still he chuckled at every one of our sudden outbursts of excitement.

As soon as we passed through security and stepped foot on the vibrant playground that is EDC, we heard the soothing echoes of synthesizers and bass coming from all directions. It immediately felt like home.

Day 1 of EDC Mexico 2014 housed a sea of colorful attendees. People from all over Mexico and surrounding parts of the world commemorated to demonstrate their love for electronic dance music. The vibe was no different than that of any US festival.

Sponsors like the Mexican beer brand Dos Equis put together a two-story slide for festivalgoers to ride down as they entered the venue. Other familiar attractions, such as the famous EDC Ferris wheel and the EDC clown posse, gave the event the traditional Electric Daisy Carnival feel

The first ever EDC Mexico was off to a fantastic start. There were 3 classic stages- Kinetic Field, Circuit Grounds and Neon Garden- dressed with signature EDC decorations while the main stage showcased the illustrious Insomniac Owl. The Discovery Project Mayan Art Car was at the center of the festival sporting a historical Mexican theme and the stadium stairs were covered with a field of daisies that lit up the night, World renowned acts like THE BLOODY BEETROOTS, BINGO PLAYERS, ALEX METRIC, CAZZETTE, FLUX PAVILION, SHOWTEK, KASKADE and AXWELL, among many others, graced their respective stages, making their EDC Mexico debuts with vivacious energy that had people dancing from start to finish.

While bouncing from stage to stage, trying to soak in all that EDC Mexico had to offer, I met a number of interesting people from all over the world. Each person was as friendly and devoted to the music as the next. The love encompassing the speedway was overwhelming and I was quickly reminded how powerful of an art music really is.

Before I knew it, day 1 had ended; leaving everyone with a whole night’s worth of stories to share with their friends when they got back to their homes and hotel rooms.

Sunday (March 16) morning came much faster than expected. After all the fun we had the day before, we couldn't wait to get ourselves back for the second and final round of EDC Mexico.

What truly intrigued me the most was AVICII’s fame in Mexico. While out exploring Mexico City, I met some fellow festival goers. They were all wearing assorted colored T-shirts bearing the name Avicii across their chests. Avicii was most definitely a favorite for the ravers of Mexico. Everyone we stopped to talk to knew of him and was a huge fan of his music. Their blazing excitement to see Avicii for the first time reminded me of how I felt when I first saw Above & Beyond at my first EDC in Los Angeles. I was humbled as I realized how blessed I am to have been able to enjoy and share the life changing experience of EDC for so many years.

We walked into Day 2 of EDC Mexico like pros. Now acquainted with the festival layout, we headed straight to the main stage to watch WILL SPARKS as he opened the night. We danced alongside people whom, outside of this complex, would have seemingly had nothing in common with us. We didn’t even speak the same language or share the same customs, yet the uplifting force of the music made us one. Everyone shared the same experience in our own unique ways.

I spent a considerable amount of time at the Discovery Project Mayan Art Car throughout day 2. Always eager to support the upcoming talent, I was blown away by the fresh faced acts making their Electric Daisy Carnival debuts. Artists like MURA, BIOLUNATICKS and TUFFKDS threw exciting sets that drew large crowds.

Other artists like HUXLEY, ARAABMUZIK, TJR, DJ Snake, MARK KNIGHT, CLOCKWORK, MAT ZO, Zed’s Dead, KREWELLA and STEVE ANGELLO, just to name a fews, put on massive, engaging
performances that made the final day of EDC Mexico one to remember for the rest of our lives.

Closing out EDC Mexico were JOHN DIGWEED, BOYS NOIZE and the weekend favorite, Avicii. Never before had I been surrounded by such a large number of people who didn't speak a bit of English, but somehow knew the words to every one of Avicii's songs. Language barriers did not exist in this moment. All that mattered was the love for the experience and the music spoke not only for itself, but for everyone there on that final night of EDC.

EDC Mexico was the second international Electric Daisy Carnival (following EDC London in June of last year) and it drew a record breaking number of 60,000 plus attendees for an Insomniac Events festival hosted outside of the US. It was also the largest music festival in all of Mexico’s history.

This particular event proved that passion for music creates one of the strongest bonds known to man. Many art forms have the capacity to bring people together, but music is an art that touches the senses, connecting us back to specific people, places and moments in time with each listen. Music creates an all consuming experience and it is a universal form of communication that everyone in the world can understand and feel in the same way. Like all Electric Daisy Carnivals, this experience in Mexico City was unique and unforgettable. I learned more about people, culture, music and life from these two days than I could have ever imagined.

It doesn’t matter what language you speak, what you believe or what part of the world you are from, we all dance and feel the same way.