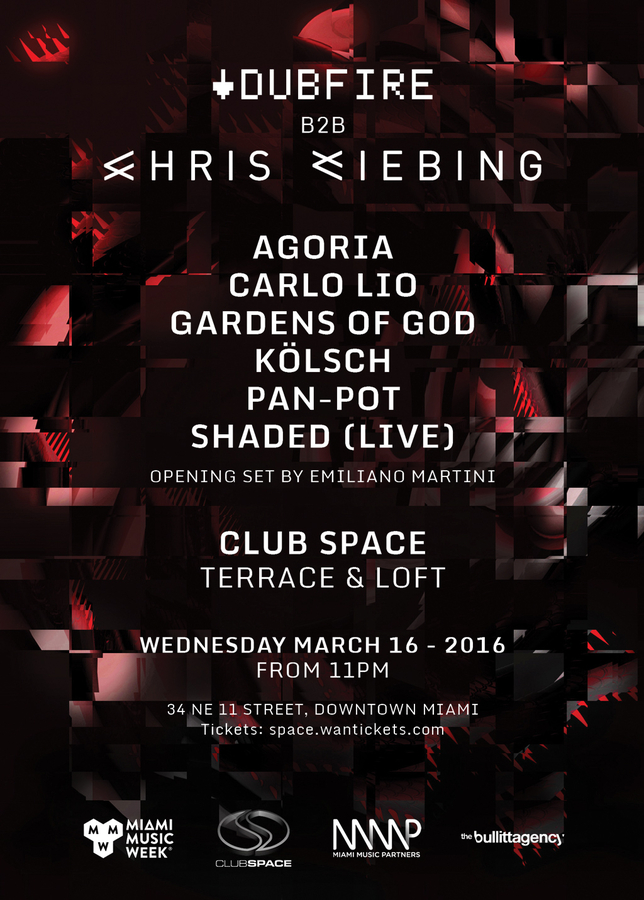 As March nears closer and closer, the best of the best nightclubs and promoters have begun to announce lineups for the dance marathon known as Miami Music Week. New venue, Heart Nightclub has announced some stunning label showcases already including Stereo Productions, Octopus Recordings, and Knee Deep in Sound with HOT SINCE 82 so far. Miami's acclaimed home for after hours, Space Nightclub, has also announced a few events including an Incorrect Showcase, a twenty-four hour birthday bash for Erick Morillo, and a closing party with Cosmic Gate and Friends. Of course, that's not all. There are still many events and parties to be announced.

As a matter of fact, one of the biggest events of Miami Music Week besides Get Lost, of course, includes a massive back-to-back set with SCI+TEC labelhead DUBFIRE and CLR's own CHRIS LIEBING. But wait, that's not all. They have some friends joining them in the Space Loft and Terrace for this incredible marathon of dark and filthy techno; including AGORIA, CARLO LIO, Ellum's GARDENS OF GOD, KOLSCH, Second State's duo PAN-POT, and a live set from SHADED.

This incredibly stacked marathon will be going into the early afternoon hours the following day and tickets WILL sell out. Tickets are available for purchase here and we hope to see you for this incredible pary on March 16th!