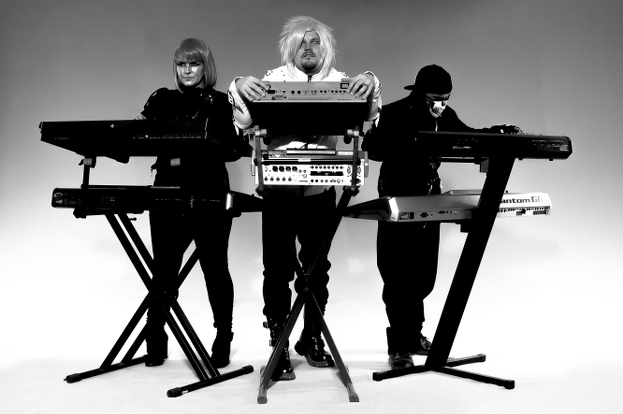 The eccentric electronic live music duo, THE DEVINE XPERIENCE, just released their self-titled debut album last month, and since has been basking in the success with their release hitting the #1 spot on the Progressive Breaks Chart. After reigning in the success of their debut release, The Devine Xperience is back with a new remix of SCRATCHE's "B.A.S.", adding their signature industrial and edgy dub sound to the original track.

The duo's sound is a mix of dubstep and electro, trance and acids, in which they create something new and original. The Devine Xperience - similar to the sound of BASSNECTAR, THE CRYSTAL METHOD and The FREESTYLERS - consists of Robert Jaros and Vanessa Garic. Jaros first got his start in music at a young age when he began playing piano, continuing on to learn drums and percussion, as well as guitar and bass. He performed live with a number of punk bands during his high school years, but then attended his first rave - which changed his life forever.

From there, Jaros began to producer his own music, performing at shows in the rave scene and parties around the country. He then formed The Devine Xperience with Garic, with the dream to create magical and unique music, bringing the "sound into ears of all across the glove in the form of The Devine Xperience". Garic is a renowned artist and incorporated her passion for music and painting into The Devine Xperience project.

Since their early summer debut release, The Devine Xperience has been riding their way to the top of the electronic music industry with interviews and features in DJ Magazine, The DJ List, The Examiner - among many others. The success isn't stopping here. The duo has plans to release a music video for "The Answer" later this year with the constant remaining goal in mind to create music without borders, and no boundaries or boxes to define it.

Check out The Devine Xperience's music video for "B.A.S." below, and take a listen to their newly remixed release of ScratchE's track. Be sure to catch The Devine Xperience perform this summer at a club, show or festival near you! For more information and tour dates, visit www.thedevinexperience.com.