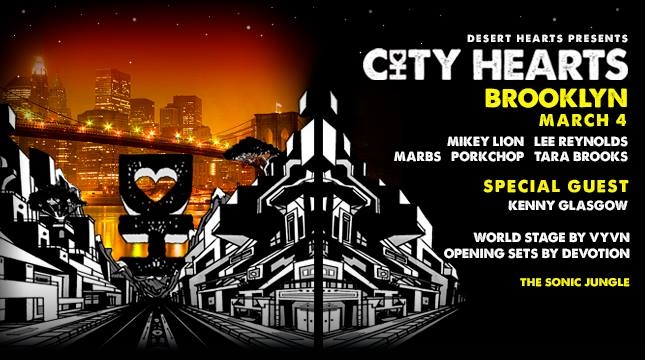 House, Techno & Love: that is the philanthropy that the beautiful souls of the DESERT HEARTS community abide by- and on March 4th, the Desert Hearts crew will be bringing their infectious energy, unparalleled love and proper tunes to Brooklyn to give you "City Hearts".

This family of dreamers will leave you with sparkles in your eyes and warmth in your heart just by merely being in their presence and seeing the happiness that radiates from their souls. Rising from the desert sands of the West Coast back in 2012 and setting a new standard for the house and techno scene, Desert Hearts builds their events off of self-expression, creativity, silly-ness, intimacy, euphoria and most importantly- love for music. Mikey Lion, the ringleader of the crew, along with LEE REYNOLDS, PORKCHOP, MARBS and Kristoff McKay are the spearheads of the Desert Hearts gang that have successfully evolved DH from a 200-person gathering in the Mojave Desert to a full-blown event series and record label throughout the span of the past 4 years; through it all, Desert Hearts has kept that same spirit and philosophy that they've had since day one alive. I mean, there's clearly a reason DH caught the eye of top-tier artists like CLAUDE VONSTROKE, MARC HOULE, MONKEY SAFARI, DJ HARVEY and more.

After successfully selling out shows in cities including but not limited to Los Angeles, New York, Tulum, San Fran, Mexico City, Chicago and Denver- as well as providing a sneak peak to the Desert Hearts Festival taking place at the end of March that has successfully peaked the interest of many, the "City Hearts" tour series will be taking over Brooklyn's cultural oasis, The Sonic Jungle. This magical night in the jungle will host a star-studded classic DH lineup consisting of MIKEY LION, Lee Reynolds, Porkchop, Marbs and Tara Brooks along with special guest- Kenny Glasgow. Experience the magic that is Desert Hearts and make sure you cop a pair of tickets here!