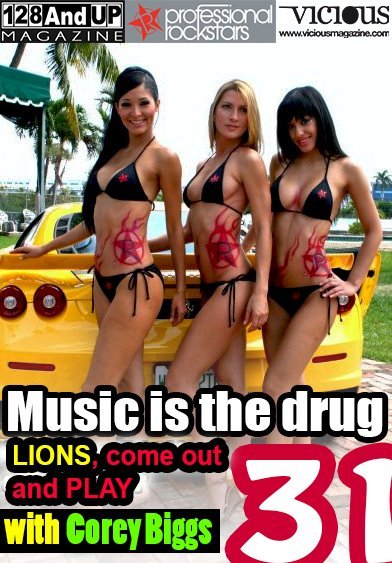 Steven Pieters – Concorde to Honolulu, yeah… that is the opening track of this crazy groovy/dark techno mix-set by COREY BIGGS AKA “Rockstar” head host of New York’s ‘Music is the Drug’ radio show, whom have featured ‘Timo Maas, Marco Bailey, Letkolben, ANDRES GIL, Pirupa, AXEL KARAKASIS among others, and who has severely grown his media network.
Corey Biggs who is a techno head more than anything is currently working on a minimal techno project with Berlin producer, Letkolben (Kommunikation Records).
“Lions come out and play” is the title of this, his 31st episode where ‘Corey Biggs’ celebrates his 34th Birthday! Yeah, last week we had ‘Carl Cox’ celebrating his Birthday from which I noticed, Trance producer & Dj Paul van Dyk was one of the first to show his best wishes on his Facebook fan page, then everyone else came along the line. Well, Corey Biggs was the week after and what a way to celebrate it but with this massive Mix set, featuring tracks from UDG, DUSKY, Andres Gil, POSITIVE MERGE, ZOE XENIA, ALEX COSTA and others (Full track-list below).
From the 128AndUp Magazine team, it’s affiliates & media partners, we wish you a happy birthday!