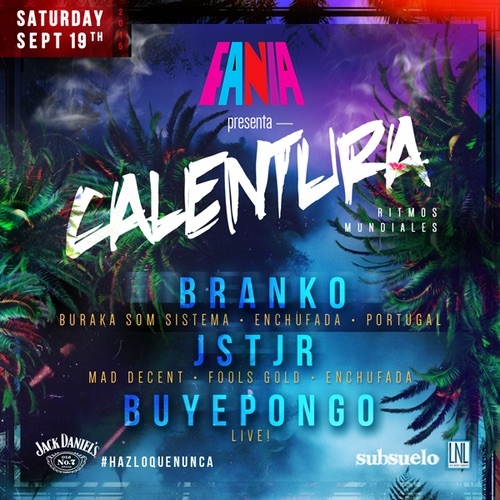 This one goes out to everyone who is growing a little weary of anything remotely associated with the words “deep house.” Everyone who is ready for something fresh. The next craze to hit the West coast is a little movement that has been picking up steam across the world as of recent known as “zouk bass.” Gaining notoriety in South America, one of its leading pioneers is now taking it global. BRANKO, co-founder of Buraka Som Sistema and founder of the Enchufada label, has had a heavy hand in the integration of more global sounds in electronic music, ultimately changing the future of dance music right before our eyes.

Branko and his re-invention of global sounds have already gained widespread support from a multitude of established artists; you may have heard traces of these sounds most notably in DIPLO’s most recent work, where Enchufada label and Mad Decent artist JSTJR aided in the production of a track off ‘Peace is the Mission.’ Similarly, Branko has also worked with JILLIONAIRE and MR. CARMACK. While many of us have unknowingly heard these influences, we now have a rare opportunity to see Branko and his fellow pioneers in their prime element.

Embarking on a whirlwind U.S. and European tour, Branko is taking global dance music to the next level. Making stops in Boston, Los Angeles, and Dallas, Branko will treat fans to sounds off his latest work, ‘Atlas’ an album which has earned high praise from critics as of late.

“Not so long ago, Buraka Som Sistema member Branko told The FADER, "Personally I think zouk and kizomba could really add a new direction to R&B and take it back to the roots in a really creative way." As part of the recording process for his new album ATLAS, the Portuguese producer found himself in Cape Town with singer Nonku Phiri and L.A. beatmaker Mr. Carmack testing out exactly that theory; and the result is the super smooth 'Let Me Go.'” – The FADER

Released in April of this year off his own imprint Enchufada, ‘Atlas’ is the progeny of Branko’s blood, sweat and love of rhythm. This is most evident in the collaborations featured on ‘Atlas.’ In producing ‘Atlas,’ Branko worked with over 20 artists, including MC BIN LADEN, PRINCESS NOKIA in addition to the aforementioned Jillionaire and Mr. Carmack.

The ‘Atlas’ tour kicked off Saturday September 5th at Sao Paulo’s Bar Secreto, and made its way to Boston shortly after. You can catch Branko on his next stop at Los Globos in Los Angeles where supporting acts include JSTJR and BUYEPONGO.

Tickets for Saturday September 19th at Los Globos are not on sale, because the show is FREE with RSVP. RSVP for a spot on the list here

Unable to catch Branko on tour? Branko partnered with Red Bull Music Academy to film Atlas Unfolded, a five-part series in which he documents the creative process behind the making of ‘Atlas.’

Watch Atlas Unfolded
Like what you hear? Check out our “Artist Spotlight” on supporting act JSTJR from earlier this year
Listen to Buyepongo ahead of this weekend