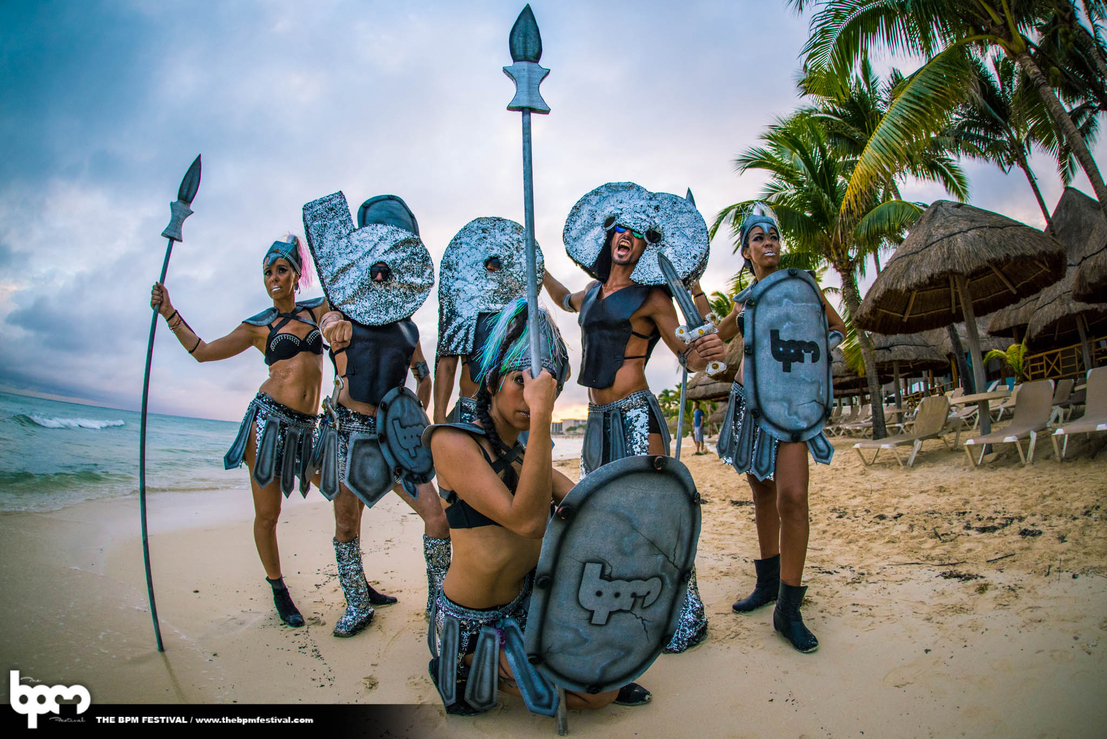 The BPM Festival is Not Your Typical Music Festival, it's Paradise

The 10-day dancing marathon known as the BPM Festival kicked off a few weeks ago in the serene and sandy Playa del Carmen in Mexico. The festival is an underground music lover's playground featuring artists spanning across genres of house, techno, tech-house, and progressive. The festivities started on January 8th and brought more than 350 artists to the Mayan Riviera. The festival spanned across eleven different dayclubs, nightclubs, and a special pop-up venue.

During the day, venues like Blue Parrot, Canibal Royal, Martina's Beach Club, Wah Wah Beach Bar and Coralina Daylight Club hosted events across the beach. Labels like Stereo Productions, Rumors, No. 19's Social Experiment, Last Night on Earth, All Day I Dream, El Row, and many more invited festival goers to the beach from noon till 9 PM and included some of the best sunset swaying ever! Personal favorites from Martina's Beach Club, where we spent most of our time, was SOLOMUN + 1, Social Experiment, and Rumors.

Solomun had one of our favorite sets from the whole festival. Always one to provide an incredible set, he outdid himself for his signature party, held for the second time at BPM, his track selection was impeccable, mesmerizing the crowd with his mixing and fluid dance moves behind the CDJs.

El Row is one wild, insane party, helmed by PACO OSUNA showcasing his outstanding skills as a sonic ringmaster for everyone in the crowd. Wah Wah Beach Bar was completely transformed from this big hut into an insanely fun circus filled with stilt walkers, inflatable balls, confetti, and so much more craziness. Paco Osuna acting as master of ceremonies from inside the booth, was just an extra addition to the already rocking party, winding up the spectators with &ME's "Woods", our welcome to the show.

The day parties were absolutely surreal; surrounded by the sparkling sun, the crashing waves, and some amazing music. Swaying and dancing in the sand is something that you don't typically experience at any other festival. Once the sun came down, the night began, and for many, the party continued. At night, more venues opened up for some stunning showcases including Hotflush, Suara, SCI+TEC, Toolroom Knights, ENTER, Octopus, and much more. Due to capacity issues after last year, Blue Venado was no longer able to be used as a venue for The BPM Festival, therefore the Jungle was created for this year's edition.

The Jungle provided more of a "festival within a festival experience" for festival attendees. Labels like Diynamic, Paradise, and Life and Death hosted events at this massive jungle. The Jungle had two stages; a large white tented mainstage and a smaller palapa style stage. The jungle was complete with food trucks, drick-ticketed bars, and plenty of spots to take a snooze like a Captain Morgan sponsored cuddle trampoline, and tee-pees with large, comfortable pillows.

However, this festival within a festival take was something different for veteran BPM attendees. For some, it was something they didn't expect and for others it was just another overcrowded stage. Although some of the best sets were heard at this venue including JAMIE JONES and JOSEPH CAPRIATI's stellar five hour set that led into the sunrise, STEVE LAWLER, DJ TENNIS in the palapa, MIND AGAINST, and Solomun's four hour set in the rain.

If crowds weren't your forte, then clubs like La Santanera, La Salsanera, and Blue Parrot were definitely the places to be. Where else could you see Joseph Capriati and DUBFIRE play until the sun began to rise? Or see Coyu play on the rooftop overlooking the Mexican Riviera? These moments were truly some that we cherished. The nighttime showcases brought some darker sounds to the Playa. For example; SCUBA, SIAN, ALAN FITZPATRICK, and OLIVER HUNTEMANN brought a dark and sultry vibe to La Santanera.

The BPM Festival was an experience like no other. The music was some of the best that we heard, the weather was fabulous; with the exception of a few rainy days and nights, and the vibes were absolutely perfect and infectious. Something that we really enjoyed about it is that you make your own schedule and you choose your own events; one minute you could be out eating dinner, and the next you could be seeing Dubfire and RICHIE HAWTIN play for hundreds on the busy streets of the Playa right outside of a taco shop. If you ever consider doing the BPM Festival, remember it's a 10-day marathon, not a sprint. Also, remember that buying the 10-day super early birds is the right way to go! Hope to see you there next year for The BPM Festival's 10 year anniversary. We cannot wait to head back to the Playa!

Photos by: aLive Coverage for TheBPMFestival.com