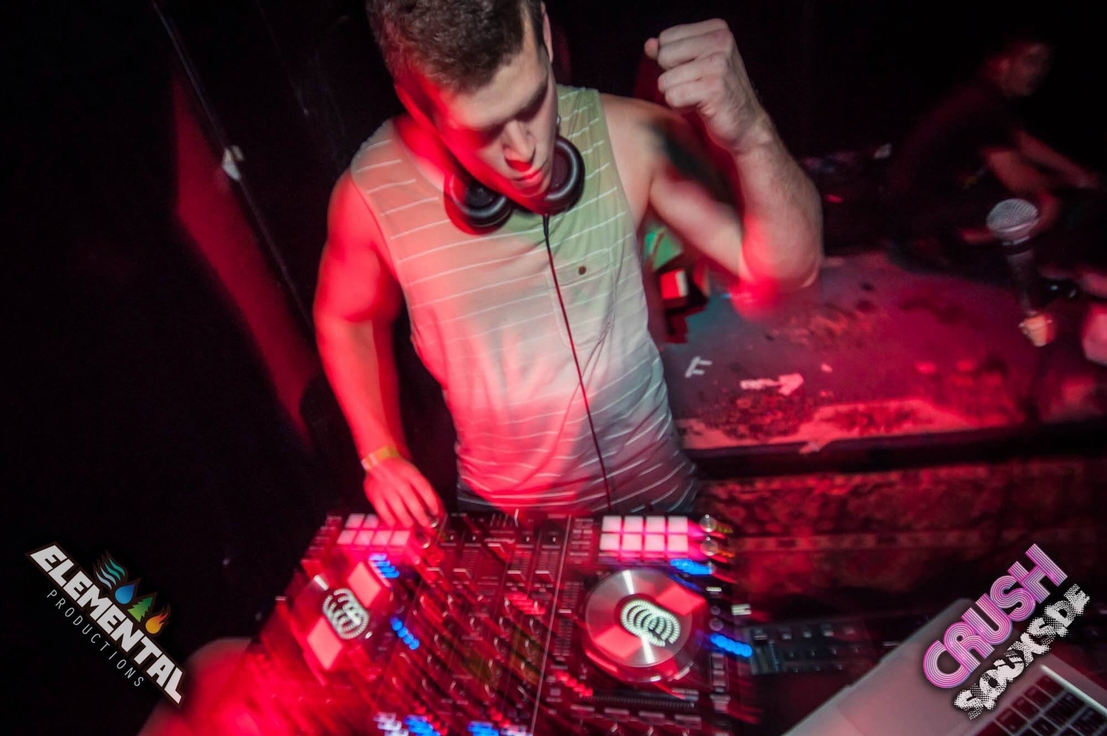 JSTJR, pronounced "gesture," is an artist who has been on my radar for awhile now. I think I first stumbled on his Soundcloud a couple years ago. I was instantly drawn to JSTJR's style of music - which really cannot be defined as any specific type. Definitely bass, a bit of trap, zouk, baile funk, hip hop and everything in between, it is evident that JSTJR finds influences across a multitude of genres and cultures, with the end result being a production style completely unique from that of his contemporaries. Trailblazing entirely new sounds in electronic music, the laborious efforts of JSTJR have not gone unnoticed. Garnering endorsements from huge players in the industry such as DIPLO, features on several prominent labels (Mad Decent, Nest HQ, Fool's Gold, SMOG), and invitations to play shows across the nation, most notably Moombah Mansion WMC later this month, 2015 is slated to be a groundbreaking year for this young talent. Needless to say, it was my civic duty as a journalist to introduce this rising star to the DJ List.

[TDJL] Before we get too serious about music - I have to know... why JSTJR? I admit it took me awhile to figure out the correct pronunciation.

JSTJR is actually my initials... James S. T. Jr. Some people definitely have trouble pronouncing it haha. I feel like those who do know are the "cool kids" and we're all in a little club together. Welcome to the club by the way.

[TDJL] The first track I heard from you was your Bass Cannon bootleg (above) and I thought "holy shit this is legit." You've been featured on Mad Decent, SMOG and Fools Gold - all huge accomplishments considering JSTJR wasn't a serious project for you until 2011. For listeners who are not familiar with your music or what you've been doing lately: Of the tracks you've put out in the last few years, pick one that you feel best encompasses you as an artist thus far? Why?

That's really hard to do, mostly because I pride myself on being a producer who doesn't have one specific genre or style. I think my track "Party" is one of the better examples of my overall style. My motive as an artist is to take the dark, dirty, party music from around the world and mash it all together; "Party" is a genre-blending 90bpm track that pulls from cumbia, hip hop, baile funk and twerk music.

[TDJL] Keeping in line with the above, is there anyone who you would credit as a mentor for you over the last couple of years?

I've had a few people who have helped out a lot along the way, certain bloggers and taste-makers who have seen what I can do and have given me the chance to prove myself on a bigger stage. That said, I'm not really sure I've had a mentor. I started off with some more underground, "global," sounds and learned to take those to the mainstream. So, a lot of the original people who I learned from and was supported by seemed to disappear as I tried to take the sounds to a more mainstream stage. Likewise, some of the "bigger" more mainstream people haven't quite embraced my style yet. So I learn from some producers and taste-makers who inspire me but like to think I am forging my own path in dance music.

[TDJL] Any upcoming releases/collaborations we should know about [That you can talk about :)]?

Right now I'm working on a ton of new music.... and it's all pretty different and unique. I'm really excited to share it soon, but want to perfect it first, ya know? Should be soon and it'll be worth the wait. I also have production credit on a really big upcoming release from one of the biggest acts in dance music, but I'll announce that later on.

[TDJL] What do you find most challenging about playing live shows versus producing in studio?

I love playing live shows, maybe even more than working alone in the studio. I live in New Hampshire right now, 40 minutes outside of Boston, so there isn't much of a producer culture or music scene up here. Going out to shows I get to meet with and talk to so many people. Still getting used to the sleepless tour life but I enjoy it a lot.

[TDJL] Speaking of live shows, in the last year you've played shows pretty much all over the place...South America being one of the places most recently. Where do you hope to go next? Bonus: Any memorable stories?

Well, I'm finalizing my Australian tour as we speak. Will be out there and hopefully in New Zealand in June! I really want to play in Europe next... hopefully by late-summer.

A really memorable moment was out in Brazil. I played a show in Sao Carlos, about 3 hours outside of Sao Paulo. It was a college town surrounded by farmland. We played the show in this small, indoor/outdoor club and then went to a college party after. It was the WEIRDEST shit I have ever been to. It was like some weird, cumbia cult gathering with witch-doctor-looking DJs, Alice in Wonderland being projected on an outdoor brick wall, and... man I don't even know. After that we slept at the promoters farm house and they made us fresh mango juice from the tree outside in the morning.

[TDJL] Mad Decent just announced their stage for their SXSW Showcase, which has you playing alongside some pretty huge names. Tell our readers what it was like being asked to play at a large-scale event such as SXSW?

It was amazing! Mad Decent was a label I always hoped to be associated with and it means a lot for them to have me out to SXSW at their official showcase. This is my first real music festival and it's definitely a huge accomplishment and milestone for me. Can't wait to show Austin all this new music.

[TDJL] Let's talk the first time you played a show...where was it? What was going through your head before you went on? Does it get easier each time?

First time I DJ'd as JSTJR, I was the opener for a small "EDM" night in my hometown in New Hampshire. I had to beg to get the gig, played to basically no one and wore a Thor mask because it was a superhero themed party... lol. I was excited. I grew up in bands and as a performer so I wasn't too nervous. It certainly got easier over time but DJing has always been a passion of mine so it's never too scary for me.

Hmm.. I'd really love to play and attend some carnival events in Brazil. That would be amazing. I think a lot of DJs aspire to play the big US festivals as well... Ultra, EDC, etc. Would be a great outlet to expose the masses to some next-level stuff.

[TDJL] If you weren't a producer/DJ, what would you be doing right now?

Definitely something with music. If not an artist, then perhaps a teacher. I can't imagine having a 9-5, or a boss for that matter.

[TDJL] 3 things fans may not know about me are:

1) I have a college degree: majored in classical music with a percussion focus.
2) I brew my own beer and love to cook.
3) I'm a pretty big nerd... love learning, history, random facts... I try to hide behind the cool-DJ persona but I have to admit it from time to time haha.

[TDJL] Any last words for our readers?

Keep an eye out on my Soundcloud for some really cool stuff coming up! Hopefully I'll see you at a show this summer ;D

If you’d like to hear more about JSTJR from the man himself, check out his REDDIT AMA from December 2014.