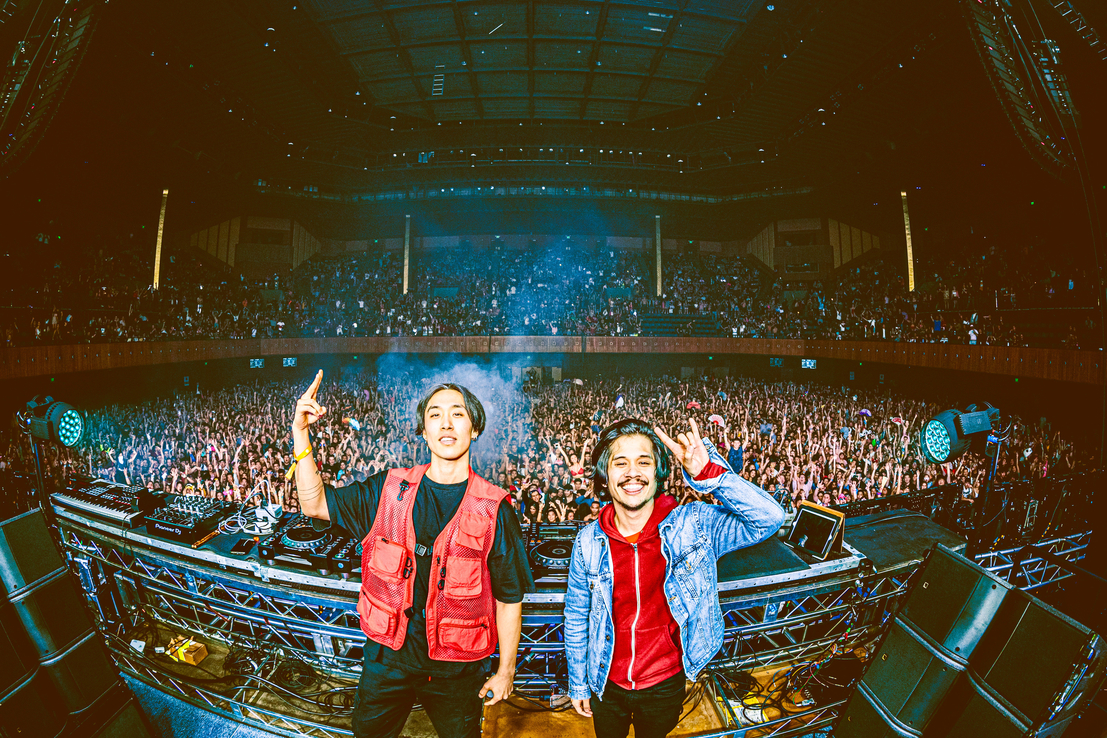 ARMNHMR Takes Us to ‘The Free World’ [INTERVIEW]

On February 7 Joseph Chung and Joe Abella, better known as ARMNHMR, released their long-awaited debut album. ‘The Free World’ is a beautifully vulnerable, melodic body of work that perfectly embodies their sound. Before their set at Crush San Francisco, the duo sat down with us to discuss the album; their inspirations, workflow and what’s to come now that it’s out. The past year has been tremendous for them with not just the album but many single releases and appearances at some of the largest festivals, including EDC.

“It’s still surreal for the both of us because our growth was never steady. It was more about being persistent and when something didn’t go right we just knew we had to keep going. For some instances, when you see artists that are successful, it’s not necessarily overnight, but it comes quickly. For us, we started before 2013 and we played a bunch of clubs, too many clubs, and we played a bunch of shows where it was like 10-20 people for years,” Chung said. “Right now in the EDM scene, you can make a good song and that can propel you up to the top, but for us we kind of had to grind it through so it’s extremely rewarding and fulfilling to see where we were to where we are now.”

The culmination of this growth led to the album, which saw them through the past few years. Throughout the creation process, they drew inspiration from their evolution as producers while still holding true to their melodic roots.

“We wanted to make it sound natural. We wanted to keep it as organic as we could while still keeping our own style,” said Abella. “It was definitely a growing experience because we’ve been working on it for two years. A lot of it was reworking songs to fit who we are now and we’ve changed so quickly, even just on our own influences, so a lot of it was years of maturing our sound. I’m glad it’s finally out.”

“We don’t really tie [our sound] to a genre, we tie it to a feeling. It’s more uplifting and melodic. No matter if we make dubstep or drum and bass or progressive house, as long as that overall theme ties around melodies and that uplifting, euphoric feeling, then that’s who ARMNHMR is,” said Chung. ‘The Free World’ features many vocalists including NEVVE, MELANIE FONTANA and MICAH MARTIN. In working with each, ARMNHMR’s approach was truly collaborative, allowing the singer more freedom to express their interpretation of the foundational melody. This really shines through in the final product and each track’s thoughtful meaning, which the duo have shared on their social channels.

“Some artists send a finished demo to vocalists, but we actually send chord progressions and get a feel on how they want to do it. It’s different when we force them into a style versus us giving them a melody and that gives them the freedom to write it the way they want to write it. Then we’ll redo it based on the tone and emotion that they convey,” said Chung.

Their thoughtfulness extends beyond the music and into the visual aspects of the album. The vivid artwork shows two characters ascending above the bounds of reality below them with VR goggles, seeking escape and connection.

“The basic premise is the free world is that alternative reality that we want our listeners to go to when they listen to music. Speaking for Joe and I, when we listen to dance music or any music, it’s a place to escape. It was the imagery of putting on virtual reality goggles to the point where you’re in this fantasy land where everything felt right,” said Chung. “The artwork is amazing. If you know Love, Death and Robots, the artist did one of the episodes in Hong Kong. After I saw that episode we were trying to find his handle on Instagram, we DM’ed him and it worked out.”

From challenges that came leading to the album’s release, came huge learnings for both Abella and Chung that they’ll carry on to their next album.

“We didn’t know how hard it is to play catch up. For album two we want to have a finished product and then show it to the label. But for album one it was like ‘it’s almost done so let’s shop it around,’” said Chung. “So this time we want to just finish it and show it to them because playing catch up was the worst, especially when you’re doing something creative. It’s like you’re forcing yourself to be thinking outside the box.”

“The thing for me was learning patience. Knowing that the thing you’ve spent so long working on is not gonna come out for another year is a very interesting experience because you believe in what you have but you’re never going to see the result until later. So we’re now just experiencing the result of all the work we’ve been putting on the past year and a half,” said Abella. There’s no stopping ARMNHMR as they move forward into 2020. With album two already in the works and much more to look forward to, they’re facing the next chapter with renewed energy.

“It’s exciting because now that we’ve wrapped up the album, everything's going to be fresh and new going forward,” said Abella.

With a steady hold on their fanbase and in the electronic world, they’re hoping that the future also brings opportunities to work with artists outside of their normal realm.

“It would be cool to work with Explosion in the Sky. That would be an interesting take on the EDM world with alternative electronic music,” said Chung.

“It would be interesting what we could do with someone more pop or mainstream. If we could blend both worlds,” said Abella.

“Yeah, something different that we can try that most people aren’t used to. Anyone or any singer that isn’t in the EDM world that would be pretty cool.”

Before we wrapped, I asked them about their what they’re currently in to outside of music.

“I’ve been so interested in the podcast game just because we listen to music 24/7,” said Abella. “I’ve been listening to the ‘Oprah for Men’ as they say, Joe Rogan, and there’s a few others like Impact Theory. In general I like learning.”

“I like sports documentaries no matter what it is. I finished watching Game Changers. I also watched the cheer one,” said Chung. “I’m just really into that not necessarily for the sport itself but just how much winners push themselves and that can be very motivating.”

The duo kicked off The Free World Tour in January and will be bringing their euphoric sounds across North America through March. Joining them are LIONE, NURKO, WE ARE FURY, WILLIAM BLACK and KLO on select dates. Additionally, ARMNHMR will link up with Dim Mak founder STEVE AOKI as support on Aoki’s Neon Future IV: The Color of Noise Tour. After seeing their dynamic and captivating set at Crush, you definitely don’t want to miss out! For tickets and more information, visit their official website.