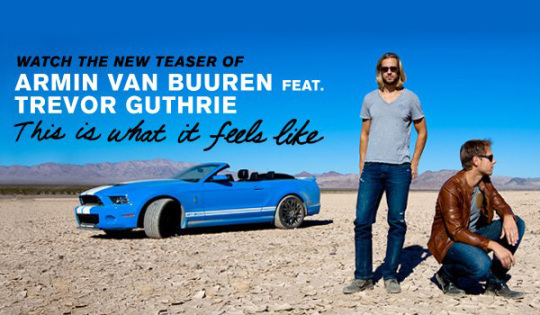 Armin van Buuren feat. Trevor Guthrie – This Is What It Feels Like (Music Video Teaser)

Armin van Buuren has released a teaser for the music video of “This Is What It Feels Like”, the leading single off of Buuren’s upcoming album Intense – his first studio album since 2010′s Mirage. If the teaser is anything to go off of, we’re in for some emotional piano and synth melodies, classic uplifting vocals (courtesy of TREVOR GUTHRIE), and a feel-good video of desert car races. Similar to tracks on Mirage, “This Is What It Feels Like” goes heavy on the pop elements, but the track’s production is masterful and its positive vibes are sure to be appreciated. Watch the teaser above and pay attention to these dates: the full music video will be revealed on March 17th (by a secret, “very special guest”), the single will drop on April 5th, and the full album will drop on May 3rd.