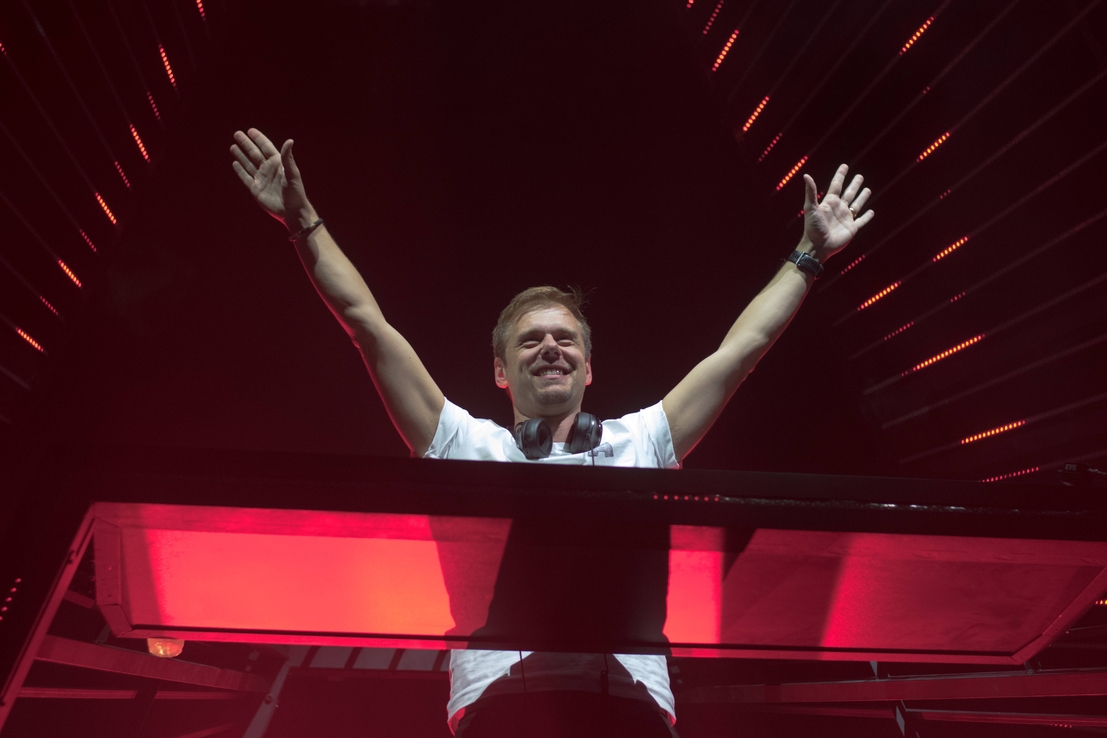 Following the release of his seventh album 'Balance', ARMIN VAN BUUREN set across the globe on the album tour, which included a stop in San Francisco. Trance fans in the Bay Area would be treated to two incredible shows; the main one at Bill Graham Civic Auditorium and the afterparty at The Midway, both with support from ELEVVEN and RODG. The live production mirrored the album’s intention to find balance between his trance roots and newer explorations in his music, showcasing hits old and new. The lights dimmed as Armin stepped into the giant, illuminated A and “La Résistance De L'Amour” began to play. The crowd roared as they danced with the lasers in time to the music. Lights in the A gave the perception of depth on the stage that was mesmerizing to watch and the energy never dipped during his 2.5 hour set. Haliene, Candace Sosa and Sam Martin all graced the stage to provide their vocal talents. We heard most of the tracks off ‘Balance’ including “Unlove You,” “Song I Sing,” “Wild Wild Son” and collaboration with ABOVE & BEYOND “Show Me Love.” Armin also selected tracks from other heavy hitters and played out MARLO’s “Lighter Than Air,” Above & Beyond’s cover of “Blue Monday,” and a wonderful mashup of MEDUZA’s “Piece of Your Heart” over ANDREW BAYER’s “Magitkek.” Perhaps my favorite part was hearing iconic older releases like “Another You,” “This is What it Feels Like” and “Intense.” Armin even threw in “Communication,” which was released in 1999. I was transported back to hearing these at previous tours and was blown away by how much of an impact these songs still had. Singing along with the sold out crowd was so much fun. The party continued at The Midway with 1500 people in the crowd who stayed until 3:00am. This made quite the impression on everyone who was there. Energy reverberated off the walls, filling the space as Rodj opened, Armin played a different, yet just as powerful set, and Elevven closed the night.

“Armin made many long-standing fans happy with an un-orchestrated uplifting trance set reminiscent of what made so many of us fall in love with him so many years ago,” said Ryan Russell. “Seeing local stars Elevven close down the night with their fresh and unique “bass trance” made it hard to leave, even for trance purists. No one seemed able to go home after Armin stepped offstage— a packed dance floor an hour after the headliner exits is a rare sight to see.”

“Armin has been one of our biggest inspirations over the years, so we were incredibly excited to play with him three times in our home state. We played deeper sets filled with music from our back catalogue in our opening sets, and really loved closing out after him at The Midway with some of our newer material,” said Shahin Kanafchian, one half of duo Elevven. “Even though we live in LA, we still feel San Francisco is our home crowd. It was so awesome seeing so many friends and fans come through and show their support at these shows, and it was amazing seeing The Midway packed well past 3:00am even after Armin had finished!”

Both shows made for an unforgettable night Armin’s reign over dance music continues as he returns to Utrecht this weekend for A State of Trance’s highly-anticipated 950th milestone show. Fans from all over the world come to enjoy the festival and for the first time, a special pre-party will also take place in Amsterdam on February 14, headlined by Armin himself. Growing meteorically as an annual celebration, A State of Trance has become one of the most iconic events on the dance music calendar and brings the biggest names of the genre to perform stunning sets. For more information visit the official ASOT website.