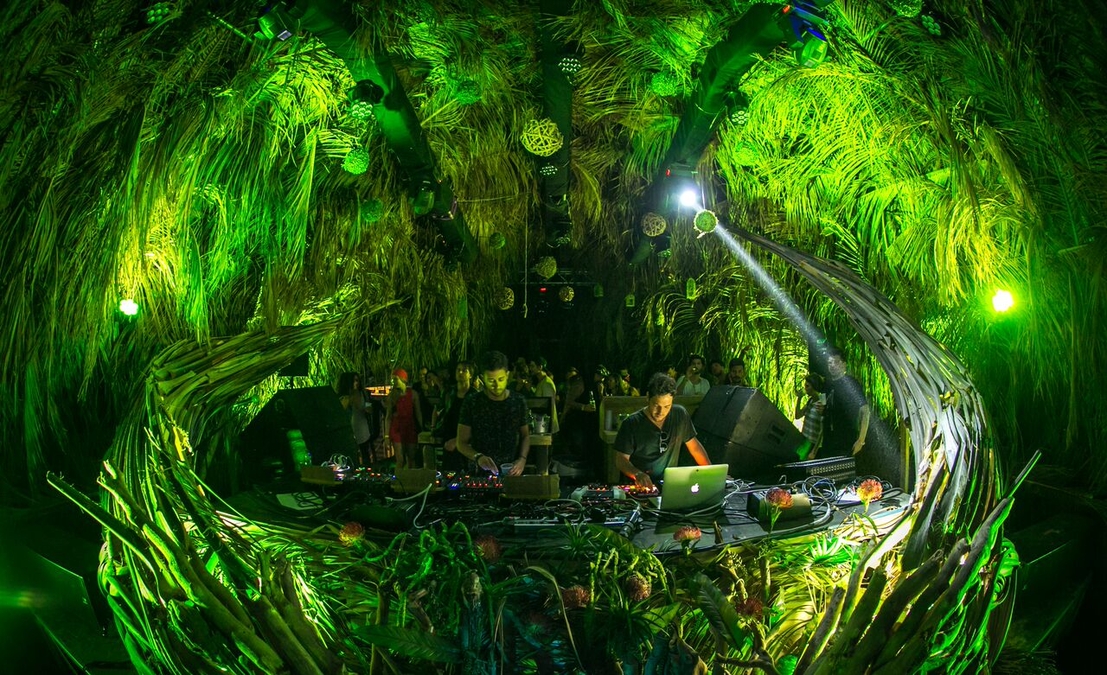 The festival was held at 6 locations and boat party. Most of the event was held at the farthest location for most of the visitors at Happy Bay. At Happy Bay you would be right next to the beach and could lay down at the beach while still feeling like you were right at the center of the main stage. The sound system for the main stage was very well set up by Meyer Sound system of Los Angeles. There was only 2 food vendors at Happy Bay so the selections weren't the the greatest. But back down south of the island you could find amazing venues close to where most of the visitors were staying. You could take a taxi, drive a rental car, or like most of the festival goers and take the shuttles that was stopping at various locations near the venues. You could enjoy the outdoor club venues like Sky Beach, Refuge, and Mercure. Or you could enjoy the indoor club feel of Tantra and have the intimate feel of Layla's in the residential backyard area right by the beach near Sandy Ground. The music at SXM Festival was solid throughout the week as talent around the world converged to the island to help bring good vibes to everyone attending. M.A.N.D.Y. Started the first day off right as they brought the heat at Refuge and Blond:ish followed up made everyone stay till the sun came up the next morning. If you weren't done after that then you could head towards Layla's at 6am and with AUDIOFLY and their famous Flying Circus party till noon. Happy Bay opened by then and most of the festival goers started regrouping to catch JON CHARNIS opening up the party while Tara Brooks and ZACH WALKER were playing on the smaller stage near the beach. Day 2 offered the most variety of parties and choices for everyone as all of the venues were open that day. You could catch FUR COAT at Sky Beach, Martinez Brothers banging it out at Tantra, or SEBASTIAN MULLAERT bringing his unique sound at Refuge. Day 3 offered great music from CHAIM, Matthias Meyer, DOC MARTIN, and Shaun Reeves, and RPR Soundsystem.

The stand out DJ's at the festivals were RPR Soundsystem, Chaim, Doc Martin, LEE BURRIDGE, RICHIE HAWTIN, John Aquaviva, M.A.N.D.Y., THE MARTINEZ BROTHERS, RARESH, Van Jee, Blond:ish, Ame, and Richie Hawtin. The biggest disappointment of the festival was the performance of RICARDO VILLALOBOS. A lot of the festival goers have never seen Ricardo play in the United States and was looking forward to listening to him for the first time ever. Unfortunately he seemed to be all over the place and had a couple of issues transitioning to the next song and stop/started mid transition and could not get the crowd going after a slow build up. It was a disappointing way to see a legend of electronic music perform for his fans who traveled along way to see him for the first time. Hopefully there will be other chances to see him play better in the future....

The biggest star of the festival wasn't the music, but island itself and it's friendly residents that greeted the visitors. There are tons of activities to do in the island beyond the music festival as you can rent ATV's, go snorkeling, zip lining, and ask for a tour to the darker and real side of the island where the locals live. The food for the most part was excellent as you could ask taxi drivers and hotel workers where the best restaurants are. Overall the 2nd annual SXM Festival was a much smoother success as the promoters learned from their first year and made the proper adjustments to the festival. The locations were closer, shuttles ran more efficiently, and a lot less issues with locals. It'll be interesting to see how the festival goes from here on out and see if it will grow to become an even larger festival than it already is. The promoters for SXM Festival must be applauded for taking another huge risk in throwing an island festival in a foreign land. Here's hoping for a brighter future for SXM Festival!